« The Nuclear Option | Main | A Whiff of Taxonomy – The Tenericutes » 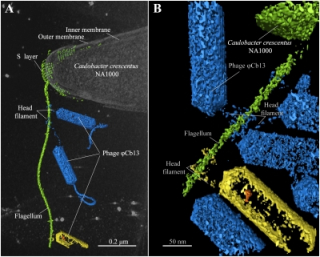 With the approach of the meter-scale winter Olympic Games, we're considering likely contenders at the latest nanometer scale games, where microbes strut their stuff and awe us with their performance of amazing feats. Never heard of the Microbial Olympics? Well, yes, they are largely overlooked by the major networks . . . which is why you come to STC! Past microbial games covered by other networks can be found here and here.

Rodeo: Founded in 776 BC by the Greeks, the ancient Olympic Games included horse races and chariot races. Pure Greeks if ever there were any, as evidenced by their name (βακτήριον + φαγεῖν = bacterium-eating being), phages participated in these games enthusiastically, showing their agility around horses in particular. So it was only natural that phage patrons Félix d’Herelle and Frederick W. Twort would personally invite the phages to participate in the "rodeo" event that was added to the modern games nearly a century ago.

Figure 2.  Left: Multiple choanoflagellates respond to lipids released by A. machipongonensis bacteria by joining head-to-head. Source Right: The movement results in this beautiful rosette structure. These tiny one-celled eukaryotes may hold clues to the origins of multicellularity. Source

For decades, phage χ (chi) was the reigning champion, eliciting the moniker "Cowboy" from Merry and glowing praise from Michael Yarmolinsky for its stunning technique: "As a macroscopic observer, I view the ability of χ (chi) to lasso and ride astride a spinning [flagellar] filament as an acrobatic feat out of the Wild West". Bacillus subtilis phage PBS1 has in the past presented a serious threat to Cowboy's position. But recently the field has really heated up: Salmonella phage iEPS5 has been spotted in the training camp, and the world of phage sports was caught with mouths-wide-open upon learning that Caulobacter phages ϕCb13 and ϕCbK attach to their host's flagellum via a 'head filament' (Figure 1)! Yeehaw!

Luge: Representing the phage phlag, we have Enterobacteria phage PRD1 (whom Merry refers to as "Slick"). Slick trains in E. coli with a 31 gene team. The team's secret to success is the lipid membrane it takes from E. coli and fashions into a super-slippery chute along which the phage cargo slides with breathtaking ease into the host cytoplasm. Crowds will be dazzled; E. coli will, as usual, have an angry outburst. 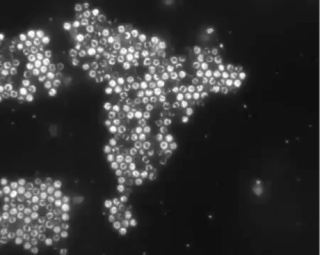 (Click to view video) Figure 3.  A swarm of the sulfide-oxidizing swamp bacterium Thiovulum majus forms a crystal-like structure under the microscope. The individual cells to one another and beat their powerful flagella, pulling nutrient-laden water through the colony. Source

Synchronized swimming: Competing under the protozoan flag is a team of choanoflagellates, Sphaeroeca volvox, under the expert guidance of Algoriphagus machipongonensis (affectionately known as "Coach A"). When Coach A releases bioactive lipids, they send these shapely little protists into a synchronized choreography whose crowning moment is the formation of a dazzling rosette structure (Fig. 2). The effect on crowds will be hypnotic, hinting at the beginnings of multicellularity.

Standing between the choanos and the gold, however, is the enigmatic Thiovulum majus, competing under the prokaryote flag. An aura of mystery surrounds this unculturable team. What is known, however, strikes dread into the nuclei/nucleoids of competitors: Thiovulum train in a swamp, eat sulfur, and have a reputation as super-swimmers, dominating the field with a record speed of 60 body lengths per second! A secretly released training video (Figure 3) confirms competitors' worst fears, showing the Thiovulum team using their powerful swimming abilities to form a series of -- what's that? -- crystal-like structures! The currents of water they whip up while executing this complex formation are so powerful that some commentators have dubbed them the "microscopic tornadoes". Hang onto your hats!

Wrestling: Training alongside Slick in E. coli is another entrant under the phage phlag, "levivirus M". M uses its LysM protein to face off with bacterial MurJ protein, intent on blocking MurJ from its role in synthesizing bacterial peptidoglycans. Remarkable agility and strength will be on full display as LysM traps MurJ in one of its flippase conformations, vanquishing its foe and clearing its path to an explosion of glory. Not to be missed!

Additionally, we have an Olympic challenge for you, readers. Identify the microbe and the Olympic event depicted in Figure 4, and be sure to let us know about any other microbial contenders you've come across.