Over a week ago we posted the responses to our query about a notable paper that appeared in 2017. A number of friends and colleagues responded with alacrity. The responses were re­mar­kab­ly varied and included research in widely disparate branches of microbiology. Whereas many of the responses were from people residing abroad, this breadth of interests is surely universal. 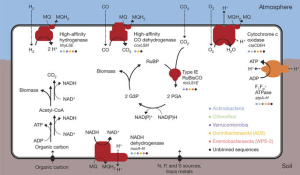 Scavenging of atmospheric H2 and CO by Ere­mio­­bacteraeota and Dormibacteraeota. Source

Let us agree that the field of microbiology is extremely va­ried in scope and that the interests of its practitioners reflect this breath. Attesting to that is that only one of the articles recommended was also been covered in our blog, the one on the 'phage nucleus'. This was the only piece of work that had been chosen by two of our cor­res­pon­dents. Not surprising, as this finding shakes the foundation of what we think a nucleus is.

Want me to choose a favorite of my own? I would opt for the report that bacteria in Antarctic deserts get their and energy from rare atmospheric gases, such as hydrogen or carbon monoxide (covered here). I think this defies any common discern­ment of what bacteria (or for that matter any living thing) can do. I would never have guessed that. But then, I would not have guessed at the rest of the submissions either.