Note in advance: I borrow the title from an earlier post by Elio, who has a penchant for mushrooms and puns. Yet Biology knows various 'nuclear options' and all have to do not with politics but, in some way or the other, with the eukaryotic cell nucleus.

When considering "Who ate whom?", you're likely to think of the eukaryotes. They gobble up just about everything by phagocytosis, a common property of unicellular protists and cells of more complex multicellular eukaryotes such as us humans (macrophages, for example ). And whether it's microplastics, mineral fibers like asbestos, organic debris or living cells, eukaryotic cells are not particularly choosy. Yet, everything they ingest is stored for processing in special vesicles, termed phagosomes. Living cells are especially nutritious but there's a problem: some bacteria regard eu­karyotic cells as equally nutritious and have found ways to turn the tables. Inside human cells, for example, Coxiella burnetii manipulates the phagosome such that it survives phagosome‑lysosome fusion and then propagates in it. Legionella pneumophila blocks this fusion, modifies the phago­so­me, and replicates within. Following a different strategy, Listeria monocytogenes and Francisella tularensis are both able to escape the phagosome and multiply in the cytoplasm. Salmonella typhi, invasive E. coli  strains, and Shigella behave similarly. Several other 'invaders' are known to clinical microbiologists. 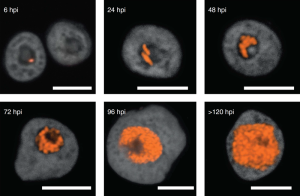 And then there are the members of the Rickettsia / Pela­gi­bacter / Wolbachia clade, a deep branch of the Alpha­pro­teobacteria and sort of a Pandora's box when it com­es to strategies for intracellular survival and propagation (see a clipping from a larger 16S rRNA tree for the alphas here (Source )). One exquisite intracellular 'niche' is ex­ploi­ted by Midichloria mitochondrii, which targets mito­chondria in ticks (featured here in STC ). Other Rickettsia-related bacteria take the 'nuclear option'. After escaping the vacuole, Rickettsia bellii  infects the nuclei of ticks and amoebae, and, taking the same route, some Holospora / Caedibacter species thrive in the nuclei of Paramecium hosts or in other 'niches' of their host for good reason (as Merry had discussed earlier here ). A highly infective but curable Rickettsia-type symbiont was found in the cyto­plasm and the nuclei of infected cells of the leafhopper Nephotettix cincticeps. These rickettsiae infect also the nuclei of oocytes and sperm cells, and thus give a rare ex­ample – actually the first documented case – for effi­ci­ent bi-parental symbiont transmission. The three cases I just mentioned are far from being exceptional, and here's a fourth example of an Alphaproteobacterium 'going nu­cle­ar'.

Researchers in the lab of Matthias Horn at the University of Vienna, Austria, describe in a study from 2014 the iso­lation and characterization of an amoeba with intracellu­lar bacteria that they found during routine sampling from a nitrifying bioreactor at their institute. One purified isolate was morphologically similar to known Hartmanella species, an observation they confirmed by 18S rRNA sequencing. Hartmanella is a sister genus of the better known Acanthamoeba, and both genera are, by their 18S rRNA, more distantly related to Para­me­cium, Dictyostelium, and Naegleria. Since amoebae are known – I'm tempted to say 'notorious' – for frequently hosting intracellular bacteria, they checked their isolate, Hartmannella sp. FS5, by microscopy and by fluorescent in situ hybridization (FISH) with a probe specific for bacterial 16S rRNA. They found that intracellular bacteria resided almost exclusively in the cell nucleus (Figure 1). 16S rRNA sequencing of these bacteria revealed their identity as a novel species from the Holo­spora / Caedibacter branch of the Rickettsiales, which hey baptized 'Candidatus Nucleicultrix amoe­biphila' (Figure 3).

Schulz et al. monitored the time course of Hartmannella infection by Nucleicultrix using FISH, and staining of cellular compartments. The bacterium is taken up by phagocytosis, resides within the phagosome, and survives the acidification brought about by lysosome fusion. Single symbionts that escaped from the phagolysosome were detected in the cytoplasm as early as 2 h p.i. (=post infection ) (Figure 1). Nucleicultrix was first seen within the nucleus 4 – 6 h p.i. Only following inva­sion of the nucleus did they start replicating. It is unknown exactly how the bacteria invade the nu­cleus but the researchers suppose that when Hartmannella  undergoes mitosis, during which the nuclear envelope disintegrates, the bacteria might get access. The bacteria were always found at­tached to the chromatin. At ~48 h p.i., they counted up to 32 bacteria in one nucleus, suggesting a doubling time of about 8 h at this stage of infection. The nuclei were densely packed with bacteria after 72 – 96 h, and strangely increased in size at 120 h p.i. (with some 1.5 ×104 bacteria within one of these nuclei! ). Host lysis occurred, though rarely, at >96 h p.i. (Figure 3, lower left panel), and they observed, instead, normally dividing Hartmannella sp. FS5 trophozoites with infected nuclei throughout the course of the experiment, with both daughter cells of dividing amoebae carrying the symbiont. Apparently, Nucleicultrix is transmitted in Hartmannella sp. FS5 both horizontally and vertically, and without compromising the integrity of the host chromosomes (Figure 3). In con­tinuous culture, nearly 80% of all Hartmannella sp. FS5 trophozoites contained the symbiont but this did not notably affect their growth as symbiont-free and symbiont-containing cultures had virtually identical growth rates at temperatures ranging from 14° to 37°C. The researchers report their successful long-term cultivation of the Hartmannella–Nucleicultrix symbiosis for more than two years, with 30 – 80% of all amoebae being infected over this extended time. This is all the more remarkable as, obviously, Hartmannella sp. FS5 can be cured from their Nucleicultrix  endosym­bi­onts spontaneously, but are re-infected repeatedly despite the endosymbionts being, in addition, transmitted vertically, even within cysts. One could actually call this a "yo-yo symbiosis". 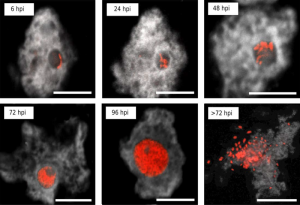 Figure 2.  Infection cycle of 'Candidatus Nuclei­cultrix amoebiphila' in Acanthamoeba castel­la­nii. The infection process was monitored over a course of 120 h and visualized by FISH using the Nuclei­cultrix-specific probe CBR125 (shown in orange) and probe EUK516 targeting the amoe­ba host (shown in gray). Single bacteria colonize the nucleus within 6 h p.i.. The nucleoplasm is completely filled with bacteria after 72 – 96 h, which is accompanied by significantly enlarged nuclei. Host cell lysis occurs from >72 h p.i.. Bar, 10 μm. From Suppl. Info.. Source (Open Access PDF here)

Would Nucleicultrix amoebiphila infect amoebae other than Hartmannella sp. FS5 ? Since the authors could not grow Nucleicultrix in the absence of the host, they puri­fied them from co-cultures with their host, and added them, together with heat-inactivated E. coli  as a food source, to cultures of seven Acanthamoeba, Hart­man­nel­la and Naegleria strains. Using FISH, they then screened these cultures 7 days after infection for the presence of Nucleicultrix. It was not detectable in strains of Acanth­amoe­ba sp. UWC8 and Naegleria gruberi. With varying in­fection efficiencies, Hartmannella vermiformis and four other Acanthamoeba  strains were susceptible, the bac­te­ria always being located within the host nucleus. Nuclei­cul­trix was found to infect Acanthamoeba castellanii  less efficiently than its 'cognate' host Hartmannella sp. FS5, but the infection proceeded with a similar time course. A. castellanii cell lysis began at greater than 72 h after infection, thus releasing free progeny Nucleicultrix. At >96 h, the few cells that had not lysed before showed en­larged nuclei containing ~3 ×103 progeny Nucleicultrix cells (Figure 2). Infected A. castellanii cultures could be propagated for several months with low infection rates of <20%, but the researchers never ob­ser­v­ed encystment of infected amoebae (likely because all the infected trophozoites had already ly­sed prior to switching to the alternate life stage as cysts upon starvation ).

In the absence of E. coli  as food source, Hartmannella strains other than the original F5 strain could not be infected by Nucleicultrix. Infection of F5 was poor, although possible, without the heat-inac­ti­vated E. coli (~7% infection rate after 48 h ). These results suggest that the pair Nucleicultrix amoe­biphila–Hartmannella sp. FS5 co-evolved, that is, it achieved a considerable degree of reciprocal adaptation, and my initial remark that eukaryotic cells "gobble up about everything" was an over­simplification. More importantly, these results underscore that the use of traditional terms as "ob­ligate parasite" to characterize the lifestyle of a bacterium has become questionable: Nucleicultrix amoebiphila  is an 'obligate parasite' for A. castellanii  and other amoebae, for sure, but is more like a facultative endosymbiont for its host Hartmannella sp. FS5. Notice that we do not yet know how the amoeba profits from transmitting this symbiont vertically (Figure 3). It might well be – but it would have to be shown experimentally – that infection by Nucleicultrix protects Hartmannella sp. FS5 against other potential invaders in their normal habitat that they share with a plethora of bacteria and amoebae (see last paragraph for an example ). 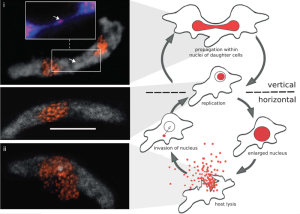 Figure 3. Modes of transmission of 'Ca. Nuclei­cultrix amoebiphila'. Key events during trans­mis­sion of Nu­cleicultrix in Hartmannella sp. vi­sualized by FISH are shown in the left panel. Bac­teria and amoebae were labeled with probes CBR125 (orange) and EUK516 (gray), re­spec­ti­ve­ly. A dividing Hartmannella trophozoite is shown (i) with the distribution of Nucleicul­trix amo­ng both daughter cells can be seen. Note the single bacterial cell (arrows) within the amoeba nucle­us undergoing segregation. Host cell lysis (ii) oc­curs only rarely in Hartmannella sp.; bar, 10 mm. Right panel: model of the life cycle and trans­mis­sion of Nucleicultrix in amoebae. Although vertical transmission is predominant in Hart­man­nella sp., host lysis and horizontal trans­mis­sion is the major route of Nucleicultrix in acanthamoebae. Source (Open Access PDF here)

To learn more about the environmental distribution and diversity of Nucleicultrix amoebiphila, Schulz et al.  per­for­med data mining, that is, searches for homologous se­quences in reference data bases. They found ~1,300 se­quences with similarities exceeding 95% to the 16S rRNA of Nucleicultrix, most of them >99%, and distributed among two distinct clades (sequences with >97% simi­la­rity are, by convention, considered to belong to an 'ope­rational taxonomic unit' (OTU), as a pragmatic proxy for 'bacterial species' ). The vast majority of matching sequen­ces originated from freshwater samples, fewer from soil samples and from anthropogenic habitats, humans, and animals. However, as all samples originated from geo­gra­phically distinct regions, Nucleicultrix and its host amoe­bae clearly have a wide if not worldwide distribution, even if their actual numbers in the samples were low.

A post about intracellular bacteria is incomplete without mentioning the Chlamydiae. And indeed, there is an in­triguing link between Parachlamydia acanthamoebae UWE25 and the above mentioned Rickettsia bellii : both infect and multiply in Acanthamoeba species of the T4 group. Ogata et al. detected that the genomes of both harbor apparently complete sets of conjugal DNA trans­fer genes in much the same gene order and with sig­ni­fi­cant similarities to the tra genes of the E. coli  F plasmid, the Rickettsia felis  pRF plasmid, and the Ti plasmid of Rhizobium radiobacter (formerly known as Agrobacterium tumefaciens). Genes for conjugal trans­fer in other Chlamydiae have not been found so far but are widespread among the Proteo­bac­te­ria, either plasmid-born or within mobile genomic elements. The authors assume, therefore, that P. acanthamoebae UWE25 picked-up its tra genes via plasmid-mediated HGT (horizontal gene transfer ) from a proteobacterium in a shared Acanthamoeba host (think of these "Two bacteria walk into a bar…" jokes ). This assumption isn't far‑fetched since Schmitz-Esser et al. had found ear­lier that various Alpha- and Betaproteobacteria, Bacteroidetes, and Chlamydiae coexisted as en­dosymbionts in each of 8 Acanthamoeba environmental isolates – or, to put it more carefully, as intracellular bacteria (see here for a longer list of bacteria known to multiply/survive in amoebae (Source )). Ogata et al. speculate that amoeba‑like ancestral protozoa could have served as a ge­ne­tic "melting pot" where the ancestors of rickettsiae and other bacteria promiscuously exchanged genes, eventually leading to their adaptation to the intracellular lifestyle within eukaryotic cells. They stop short of mentioning the mitochondria that have, best we know, rickettsial ancestry.

But before getting all too excited about the Rickettsiae, pondering what qualifies them to interact so intimately with eukaryotic cells, know that having the 'nuclear option' is not their privilege. Zie­linski et al. identified a Gammaproteobacterium, Endonucleobacter bathy­modioli, that infects the nuclei of deep sea mussel cells but spares their gills: the gill bacteriocytes of the sea mussel Bathy­modiolus puteoserpentis  harbor symbiotic sulfur- and methane-oxidizing Gammaproteobacteria, and these symbionts probably prevent colonization of the gills by the parasitic Endonucleobacter  (featured earlier here in STC by Merry ).