Fungomania I. The Yeast and the Bee. 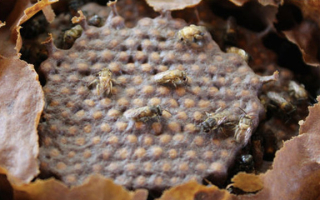 I have earlier professed sharing with many a fascination for symbioses (see here). I still don’t know why this is, perhaps it’s simply because multiple genomes interacting are more exciting than one. Symbioses come in all colors and stripes, and, most likely, no living thing is free of them. Among the exciting examples, one that stands out is the requirement of symbionts for biological differentiation. In many animals, such as certain marine corals, tubeworms, and insects, symbiotic microbes are required for the development of their larvae. Here I present yet another such example. In certain bees, yeasts are required for the larvae to form.

The insects in this story belong to a special group, the Brazilian stingless bees. The larvae of one kind, Scaptotrigona depilis, need to eat a certain yeast in order to develop further. The larvae acquire this symbiont shortly after the eggs hatch, the fungus being present in the hive’s brood cells. Indeed, these larval lodgings show fuzzy fungal growth.

In insects, metamorphosis depends on so called ecdysteroids, which are molting hormones involved the development process. Insects cannot make steroids, although if steroids are added nutritionally, insects will convert them into ecdysteroids. In the case of these bees, ergosterol, the ecdysteroids-precursor, is supplied by the ingested yeasts. (You may ask, why didn't the bees learn how to make the precursor steroid themselves? Good question.) 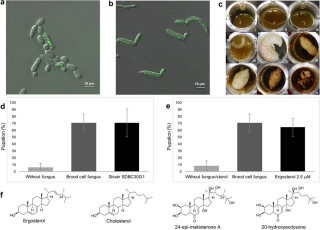 A multinational group of researchers succeeded in isolating a yeast from the stingless bees’ brood cells. Interestingly these did not grow on regular media. But realizing that brood cells contain a lot of rich food and have high osmotic pressure, they used a medium containing 30% glucose and a low pH. Success. They grew colonies of members of the genus Zygosaccharomyces. These isolates showed unusual cultural properties not previously known for this genus, such as making filaments called pseudomycelia. Usually, these structures are composed of chains of yeast cells but here no septa were seen. Also, these yeasts ‘invade’ the agar, penetrating beneath its surface, which may be similar to the required penetration of the wax barrier in the brood cells. Furthermore, these yeast cells contain abundant lipid droplets, suggesting that they may be of nutritional value to the larvae. As the authors say: "All these growth characteristics show Zygosaccharomyces sp. adaptation to survive and proliferate inside S. depilis brood cells, further supporting the specificity of this symbiosis."

The role of the yeasts in larval development could be demonstrated directly, starting out with the bee eggs, which are naturally fungus free, and adding to them pure cultures of the yeast. Some 70% of these eggs went on to metamorphose into larvae, as opposed to 6% for fungus-free controls. That steroids are involved was shown by extracting lipids from these Zygosaccharomyces yeasts and finding that ergosterol is the principal component. Strikingly, adding 2.5 μM purified ergosterol had the same effect as adding the yeasts.

This interesting symbiosis is probably not limited to the bees studied here because phylogenetic analysis suggest that other cases probably exist. Indeed, it would be surprising if such a relationship, once evolved, had been used in one instance only. One practical consequence of this study is to beware of the use of antifungal pesticides, which should be carefully evaluated if used in the rearing of bees.

(Disclosure: One of the authors of this paper is our own Roberto Kolter)