« Fungomania I. The Yeast and the Bee. | Main | Fungomania III. Everybody Talks About the Weather But Mushrooms Do Something About It. »

Fungomania continues, this being the second of three consecutive fungal posts

We dealt with a monster fossil fungus before. In the interest of expediency, let me reprint part of what I said: "Several museums possess specimens of a cylindrical organism named Prototaxites  whose tree-like trunks measure up to 8 meters long by 1 meter wide. Prototaxites  dated from approximately 420 to 350 million years ago (Silurian-Devonian era) have been collected from five localities. Their identity has been enigmatic. At the time when Prototaxites  were living, the land plants were still small in size, having only recently emerged from the seas. Terrestrial vertebrates did not yet exist. Looking like rockets poised for launch, Prototaxites  dominated the landscape, being by far the largest terrestrial life. But what were they?" 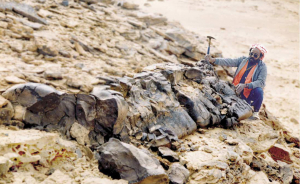 Prototaxites were abundant on land and varied – about 14 species have been described. The very existence of such gargantuan fossils from a time when the rest of life was minute provoked intense debates, finally settling (one hopes) on the belief that they were fungi. This no­tion requires a leap of fancy since nothing like it has been seen since. The only extant fungi with such a shape are about 5 cm high. But deciding on their fungal identity does not mean that the debate is over. The question arises: what kind of "higher fungi" were they, Basidiomy­ce­tes or Ascomycetes? In my previous piece, the vote went to the Basidios. A new paper contests this conclusion and the authors place these organisms among the Ascomycetes. Why do they say that?

Studying fossils requires specialized techniques, mainly making thin sections of what are essentially rocks or peeling away whatever sticks to acetate tapes and looking at these samples under optical and electron microscopes. Studying this material isn't easy and requires specialized skills and experience. Not only is the material petrified, but it may have undergone significant morphological changes in the process of fossilization. Furthermore, the specimens may have been overgrown by other organisms pre- or post-mortem. 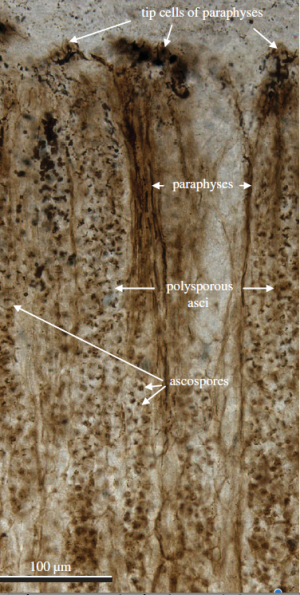 The outstanding characteristics of Ascomycetes are that their hymeneal (sexual spore-bearing) layer is made up of asci, the spore-bearing sacks that characterize todays Ascomycetes, such as most yeasts and molds, plus such mushrooms as morels. Prototaxites  sections show what appear to be asci with hundreds of ascospores within. Although most modern ascomycetes have eight spores per ascus, some have 100. In addition, Prototaxites  possess paraphyses, which are sterile support filaments interspersed among the sexual reproductive structures, such as the asci. Another argument for the Prototaxites  being ascomycetes is the finding of apothecia, a kind of vessel-shaped fruiting body common among these. The problem of interpreting shapes and forms is compoun­ded by the intricacies of fungal morphology, which makes it hard for the non-specialist like myself to evaluate conflicting claims. But a number of other morphological considerations supporting this contention are explained in the paper. The authors make the point that morpho­lo­gy alone can be misleading. Thus, Prototaxites  has mor­pho­logical affinities with certain marine brown algae (kelps) but these did not emerge until 100 − 90 million years ago, thus this relationship can't be right. When all this is said, what would they not give for a minuscule amount of Prototaxites DNA!

The authors of the paper speculate about how such a giant organism may have fulfilled its colossal nutritional requirements. If, as seems logical, they depended on plants for nutrition, they faced the problem that in their lifetime, plants were quite small. One possibility, for which there is scant evidence, but which is certainly appealing is that these organ­isms may have partnered with photosynthetic ones to make some kind of lichen-like symbiont. Anyhow, it is likely that the Prototaxites  experienced frequent and possibly metabolically import­ant symbiotic associations with other organisms. They surely carried a rich microbiome.

Thanks to Prototaxites, mycologists and mycophagists have bragging rights. At one time, fungi indeed dominated the Earth's landscape. They literally lorded over all other living things and presented a magnificent scenery to the developing Earth. Only fair, say the fungus devotees.