Fungomania III. Everybody Talks About the Weather
But Mushrooms Do Something About It.

Fungomania continues, this being the third of three consecutive fungal posts

We finish our Fungomania series of this year with a question: Why when you feel the cap of a mushroom in the woods, does it feel cool and somewhat moist? If you blamed evaporation, you would be right. But how come this takes place? It turns out that evaporation leads to the creation of air currents, and that is a good thing for the dispersal of the mushrooms’ spores. Mushrooms have an intense preoccupation for spreading their spores afield, a way to ensure the occupancy of new and distant sites. 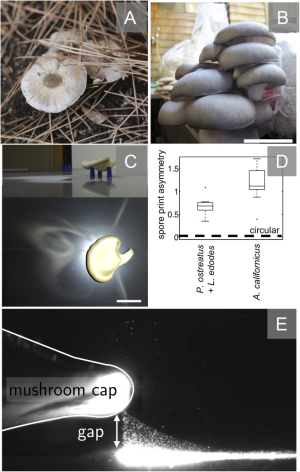 Figure 2. Mushroom spores readily disperse from pilei (caps) that are crowded close together or close to the ground. (A) Agaricus californicus mushrooms grow under a layer of plant litter on the UCLA campus. (B) Oyster mushrooms (Pleurotus ostreatus) grow crowded together in a stand. (C) Even when mushrooms are isolated from external airflows, an asymmetric tongue of spores is deposited far from the pileus. (Scale bar: 5 cm.) (D) Both cultured (left data) as well as wild-collected circular pilei (right data) produced extended asymmetric spore deposits. The parameter used to characterize the asymmetry of the spore deposit is described in Materials and Methods. (E) Airflows carrying spores out from the gap can be directly observed using a laser light sheet and high-speed camera. Shown: Lentinula edodes. (Scale bar: 1 cm.). (Source)

So intense is this concern that mushrooms make spores in prodigious amounts. Some are known to produce a billion spores per day from a single specimen. Mycologists have long relished the elucidation of how the spores clear the tissue on which they are made. This is a necessity if the spores are to disperse in the environment. It has been known for some time that the spores of mushrooms, such as the Portobellos of the store, make their spores on the surface of the gills, the lamellae seen under the cap when you turn such mushrooms upside down. The spores are made on surface cells called basidia, hence the name for these mushrooms, the Basidiomycetes. Of course, if this were all, you would end up with a heap of spores all in the same place. To avoid that, the fungi have evolved a clever way to propel the spores away from the gill surface and into air currents that carry them aloft. Astonishing is that the ejection takes place at enormous speed, initially 25 meters per second, and at the nearly implausible pressure of 180,000 x g. We discussed this mechanism before. This is an amazing tale, but what happens next? How to explain why mushrooms are successful at spore dispersal even if they are in crowded conditions, such as growing in close proximity to their brethren. And what about those mushrooms whose cap is close to the ground?

A study by several engineers and mathematicians (the senior author is Marcus Roper) answers the question first posed above and explains what good this is. They found that water evaporating from the caps of mushrooms creates upward air currents capable of carrying fungal spores some 10 cm into the air. Mushroom caps dry out quickly, more so than plants. The process of evaporation cools the surrounding air, which renders the air denser and makes it spread downwards. This is compensated by warm air flowing upwards, which results in eddies that can lift spores even over obstacles. For those interested in the engineering details, spore dispersal requires that the air flow be asymmetrical, which is in part obtained by the caps of the mushroom being asymmetrical. Figure 3. Cold air leaving the gap beneath the cap is replaced by pulling warm air to the cap. In the presence of an external wall, numerical simulations (cold outflow and warm inflow can connect to form a closed convective eddy. Our simulations show that spores in the cold gravity current may be drawn up the wall by the closed eddy. Here, shaded curves show the streamlines of the flow created by the cooled pileus. Solid lines show simulated spore trajectories. The external wall is made up of two slanted surfaces on the right-hand side of the image. (Source)

In&nbspconclusion, mushrooms make their own climate. Clever, no?