« Fungomania III. Everybody Talks About the Weather But Mushrooms Do Something About It. | Main | The Way Up and The Way Down »

Bacterial biofilms are microbial communities within which individual cells communicate with each other. Establishing a biofilm, coordinating biofilm growth in response to nutrient availability, and interspecies interactions, all depend on communication. One of the primary means of microbial communication is chemical, and often depends on quorum sensing. The chemical signals that are secreted by cells during quorum sensing require specific receptors in order to be 'heard' by the neighboring cells. However, there are disadvantages to using such signals – chemicals are diluted out when they are secreted into the environment, thus reducing the signal strength. Plus, the signals can only be perceived by specific receptors. In 2015 the Süel lab teased out an alternative, perhaps more efficient, way of intercellular communication – via K+ ions and K+ channels. 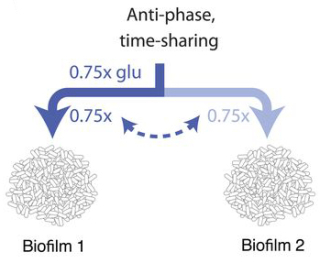 Similar to nerve cells, in bacteria K+ ions are released in self-propagating bursts that are transmitted through the biofilm. However, unlike nerve signals, which occur in milliseconds, this type of bacterial signal propagation occurs over hours. What purpose do these K+ signals serve? In a 2017 paper, the Süel lab uncovered that during times of nutrient limitation, biofilm communities exhibit time-sharing by coupling metabolism to electrical signaling, that is K+ bursts (Figure 1). These workers cultured biofilm communities of Bacillus subtilis in microfluidic chambers with glutamate as the sole nitrogen source. They grew the  biofilms on opposite sides of the chamber and measured oscillations in growth and electrical signaling. The latter required the use of a fluorescent cationic dye thioflavin T (ThT). As the biofilms grew, the cells accumulated K+ ions, increasing the membrane potential. When glutamate was limiting, the cells released K+ ions and decreased the membrane potential as reflected in the increased fluorescence of ThT. When glutamate was in excess, the biofilm coupled its oscillations in growth and electrical signaling, the parameters being inversely correlated. However, with limited glutamate, the biofilms exhibited asynchronous oscillations. Interestingly, by alternating the periods of growth, each biofilm received more nutrients, more so than they would receive under periods of excess glutamate (Figure 2). This phenomenon of time-sharing was dependent on effective communication between biofilms and competition for glutamate. After propagating through the biofilm community, the K+ ions were released from the edge of the biofilm, where they could travel relatively undiluted for distances of up to 1000 cell lengths. 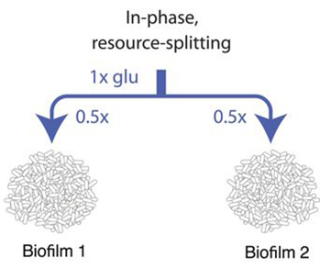 Figure 2. In-phase oscillations only allow half of the total nutrients to reach each biofilm. In contrast, time-sharing allows access to a higher nutrient concentration. Source

What might be the significance of these signals traveling such long distances? In another study done in 2017, the same group showed that the electrical oscillations periodically attracted distant motile cells. As the membrane potential of the biofilm decreased, more motile cells were attracted. This attraction was independent of the quorum sensing signals and was eliminated when an alternative a high concentration of K+ was provided.

This communication between the biofilm and the motile cells influences the tumbling frequencies of the motile cells. K+ ions on the surface of the motile cells cause depolarization, opening the K+ channels. This results in hyperpolarization which increases the proton motive force, causing the switch from swimming to tumbling (Figure 3). Therefore, as the cells swim towards the increasing K+ concentrations, which are found closer to the biofilm, they experience higher tumbling frequencies. This clever mechanism increases the random movement closer to the biofilm, allowing the cells to become integrated into the biofilm. Remarkably, the K+ signals also influenced distantly related bacterial species – Pseudomonas aeruginosa was attracted to B. subtilis biofilms in the same manner. Furthermore, P. aeruginosa also became permanently incorporated into the B. subtilis biofilms. 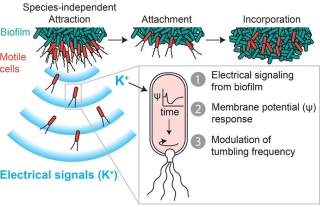 Figure 3. Motile cells can detect K+ gradients that are emitted by biofilms. They swim faster towards the higher gradients, following which the tumbling frequency of the cells increases leading to attachment and incorporation into the biofilm. The switch between swimming and tumbling is dictated by the change in membrane potential. Source

The results presented above have several interesting implications: biofilms face periods of nutrient limitation in the environment and alternating the sharing of nutrients benefits both communities without compromising the rate of biofilm growth. It remains to be seen whether this phenomenon of time-sharing occurs between biofilms of other bacterial species. In contrast, attracting motile cells seems to be a universal phenomenon leading to the formation of diverse biofilms. It would be interesting to see if these same signals can help bacterial biofilms influence the host metabolism during host-biofilm interactions. 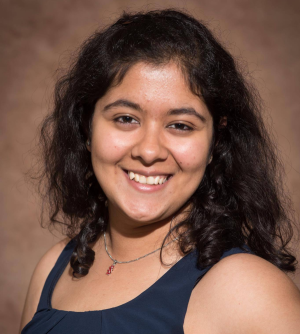 Ananya is a graduate student in the Department of Microbiology at the University of Illinois at Urbana-Champaign. She works in the lab of James A. Imlay. Ananya has recently started a blog of her own called "History Meets Science."