« Flagellar Motors: How a Bacterium Shakes its Groove Thing | Main | Fungomania I. The Yeast and the Bee. »

Figure 1. Negatively stained fragment of the sheath after isolated and purified sheaths were broken in a French pressure cell. The arrows point to edges of the fragment that have folded over to produce a moiré by super­po­sition. The striations of the sheath are evident. Bar = 100 nm. Source

What resembles a snippet of a gauze bandage, a fabric made by the 'warp and weft' technique of weaving on a loom, is actually an electron-microscopic picture of a fragment of the sheath of the archaeon Methanotrix concilii  that grows in filaments similar to many cyanobacteria (take a glimpse into Bergey's manual here). The picture – I see it as a piece of art in its own right – was taken some 25 years ago by the late Terry Beveridge, whose outstanding craftsmanship as electron microsco­p­ist and substantial contributions to structural research in microbiology have been appreciated by Elio earlier. These Methanotrix  sheaths are highly resistant to harsh alkali treatment during their preparation, and pressures of up to 18,000 psi had to be applied to disrupt them. They're mainly composed of protein and sugars but their exact composition is not yet known. Also not known is the number of different subunits, or buildings blocks, that their assembly – most likely by covalent linkage – requires. What can be deduced from this and other pictures, however, is that the sheaths have 2 preferential directions of cracking that are oriented at right angles. Also, the tight 'fabric' of the sheath as revealed by electron microscopy shows very small holes with estimated diameters of ~2 nm, which would allow methane, CO2, formate, and acetate – the main metabolites of metha­nogenic archaea – to pass through. 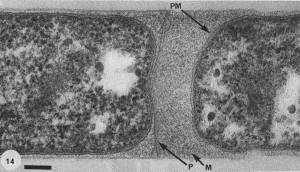 Figure 2. Thin section showing a spacer plug (P) separating two cells from a Methanotrix concilii filament. The plug appears to be multilayered and joined to the sheath. Each cell enclosed with­in the matrix (M) and the plasma mem­bra­ne (PM) has an unusually dense outer surface which is presumably the [cell] wall. Modified from Source

This "gauze bandage" sheath is wrapped around the Me­thanotrix concilii cells, not tightly yet with a rather con­stant diameter. So, it appears as a hose, or a tube, ma­de from stacked hoops. This "hose" contains the elon­gated cells embedded in an amorphous matrix of unknown chemical composition (Figure 2). The cells have a perfect­ly visible cytoplasmic membrane with an electron-dense surface layer of densely packed ~7-nm particles that might represent a cell wall. This cell wall is certainly unrelated to the Gram-negative peptidoglycan – Methanotrix is an archaeon, after all – and appears to be connected to the membrane rather than leaving any space for a periplasm. Beveridge et al. prepared cells from the sheath that lac­ked a rigid rod-like shape, supporting the notion that the supposed cell wall functions differently from the peptido­glycan of the Gram-negatives (which acts much like a support stocking for the cell). The single-cell containing 'units' of the sheath actually look like tiny barrels sitting on top of each other in scanning electron micrographs (Methanotrix soehngenii  filaments can be seen here, short Methanosaeta filaments here). The "cap" of the barrels, prominent in the transmission electron micrographs, is a structure that separates Individual cells in the Methanotrix concilii  filament, and which the resear­chers aptly called a "spacer plug" (Figure 2). 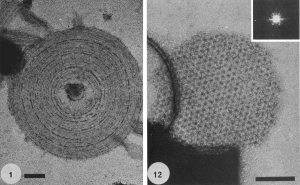 The multilayered spacer plug can be physically separated from the sheath to which it is normally firmly attached, and, upon isolation, strongly resembles a spiraling poly­mer when seen in top-view (Figure 3, 1). Another archae­on from this family of aceticlastic (or acetoclastic) metha­no­gens, Methanospirillum hungatei, similarly grows in fi­laments, with chains of its cells wrapped in a sheath and with plugs separating the individual cells. And hey, the ar­chaea are quite creative when it comes to such spacer plugs! The plug of M. hungatei  is assembled as a hexa­go­nal grid rather than a spiral as in M. concilii, despite sha­r­ing with the latter the multilayered structure and the overall dimensions (Figure 3, 12). And like their sheaths, their plugs are not really "plugs" that seal the compart­ments but more like sieves. Beveridge et al. estimate dia­meters of 6 – 12 nm for the 'holes' in a 3-layered hexago­nal grid of the M. hungatei  plug, which are thus large enough to allow the passage of solutes, inclu­ding not-too-bulky proteins, RNAs and DNA.

Posted on March 08, 2018 at 12:16 AM in Methodology, Pictures Considered, Teachers Corner | Permalink