by Nathan Jayne, Amanda Alker, and Nathalie Delherbe (The authors contributed equally to this article) 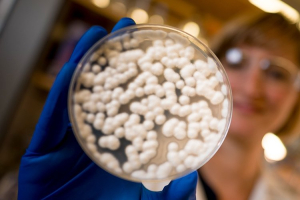 Over the past decade, there have been many large scale attempts to characterize bacterial communities, from soil and ocean microbiomes to human microbiomes. There is even a collective effort to profile the Earth’s microbiome. Scientists are not only interested in knowing who is there and what they are doing, but also how members within a community interact and affect their surrounding host or environment. In order to understand these interactions within natural microbial communities, researchers must first zero in on an environment that can be experimentally controlled. One of the major difficulties in microbial ecology has been to find the Goldilocks system to study the basic underlying mechanisms - not too simple but also not too complex, neither gigantic nor extremely small. 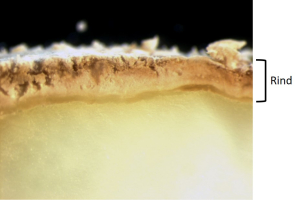 As a solution to this challenge, Prof. Rachel Dutton at the University of California, San Diego (Figure 1) proposed that a convenient model for the study of ecology and evolution of microbial communities may be cheese. Specifically, her lab studies the rind of the cheese, the thin layer on the outside of a cheese wheel. The rind is made up of a diverse mixture of bacterial and fungal species - safe to eat of course. It resembles an eroded rock face with different colored layers (Figure 2). Being relatively small and possessing mainly culturable bacteria and fungi makes rind an excellent model for the study of microbial communities. Interested in some more cheese banter and previous work done by the Dutton lab? Check out this Small Things Considered post from 2015. 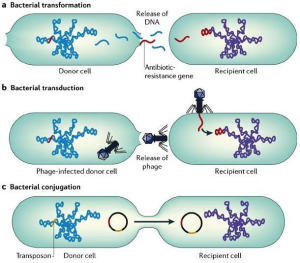 Bacteria in food often get a bad rap - product recalls, cooking cross-contamination, or expired food. But the white rind of cheese, say brie, is a mixture of bacteria and fungi that you’re supposed to eat. A diverse range of bacterial species are found in the rind, chiefly belonging to the phyla Firmicutes, Actinobacteria, Proteobacteria, and Bacteroidetes. Once the bacterial strains in the initial starter cultures are added to young cheese, wheels are left to mature and collect microbes in the dank depths of cheese caves, or anywhere the cheese is stored during aging. As the cheese sits, many new microbes may be acquired, creating a thriving community. 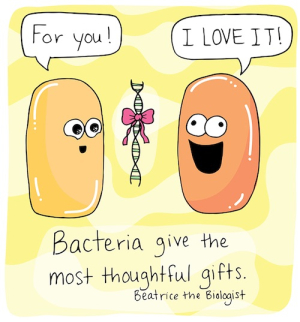 Resources can become scarce, even in the rich environment of a cheese rind. You might live on a pile of food, but when the community grows, sharing this food with millions of your neighbors will lead to some serious competition. If an essential nutrient such as iron becomes limiting, bacteria must express the machinery to improve its capture. Bacteria sythesize specialized molecules, known as siderophores, which are high-affinity iron-chelating compounds that are secreted to bind iron. Once bound in a siderophore, iron can be transported across the bacterial envelope through dedicated transporters. Iron is critical for many microbes’ metabolic pathways, which is why they have evolved mechanisms for both siderophore transport and biosynthesis. However, not all microbes early in their evolution contained the genetic information to do this, putting them at a disadvantage in competitive environments. What to do? If you can’t beat your neighbors, join them! Microbes can take pieces of DNA from the environment or other organisms and incorporate them into their own genomes in a process called Horizontal Gene Transfer (HGT) (Figure 3 & 4), which has been extensively covered in STC (for recent examples see here, here and here). 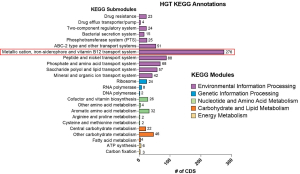 This form of genetic transfer leads to sharing between organisms, or stealing, if across species. Such transfers allow important genes to be gained by competitors. The Dutton lab sought to identify the genes transferred in the cheese rind. After looking at over 150 cheese bacterial genomes, they found that the majority of shared genes were in mobile DNA elements, pieces of the genome known to have mechanisms to “move” themselves around, and consequently, be shared between organisms. Dutton’s lab was not interested in all of those frequent travelers. Looking at the remaining genes, the lab used the Kyoto Encyclopedia of Genes and Genomes (KEGG) to identify which pathways had the most frequent gene transfers. Although many genes were unassigned (about half), a group stood out (Figure 5) – the iron uptake genes!

Not only did these researchers find iron uptake genes to be a major portion of HGT, but they were in organized groups or genomic islands. These islands also encoded genes necessary to help facilitate HGT and movement around the genome. Termed “RUSTI” (iRon Uptake/Siderophore Transport Island), these groups of frequently transferred genes were similar across many species. (How many iterations of acronyms do you think they went through to get “RUSTI”?) (Figure 6). Even more, this lab was able to show that the microbes were sharing these complex genetic islands with great frequency. One phylum, Actinobacteria, had a an especially high number of horizontally tranferred genes, which means that not every phylum is equal in this community; some share more than others (Figure 7). The RUSTI islands enabled microbes to move around their entire set of iron-uptake genes, rather than one piece of the puzzle at a time! 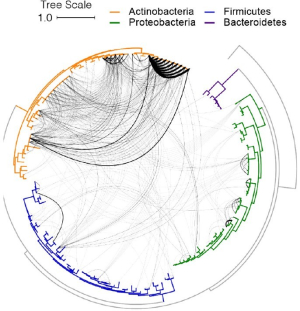 Clearly, in a dense community competing for the same food source, genes that encode for iron uptake mechanisms are highly valuable. We know that siderophore transport is common in iron-limited environments; however, we don’t know which bacteria initially evolved the RUSTI genomic islands. Some bacteria contain the machinery to synthesize siderophores and proteins needed to import them into the cell. Others do not synthesize siderophores but are able to transport them inside the cell by stealing siderophores made by their neighbors (Figure 8). Siderophore synthesis reminds us of making a dinner from scratch: you have to go to the store to get the ingredients, and then wash, prepare, and cook them. When bacteria steal loaded siderophores it’s like eating the leftovers from Mom’s house; prepared from scratch by her and eaten by you with no major effort. Either way, both mechanisms allow bacteria to get their essential nutrients, but the ability to obtain iron through siderophores (especially ones not made by you) gives the bacteria a competitive advantage. 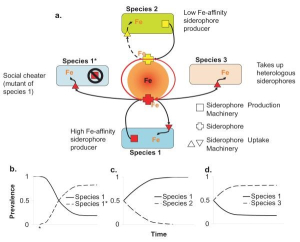 (Click to enlarge ) Figure 8. Sideophores, a means of iron collection, made by some, stolen by others. Source

Thanks to the cheese model, the Dutton group has been able to determine the frequency of horizontal gene transfer, the species involved, and geographic distribution of RUSTIs in the cheese microbial community. While these findings are interesting, they belong to just one of the many stories that can be told from looking at cheese as a model system. Studies like this will move us a step closer to understanding microbial community dynamics and extend this knowledge to macro scales. In time, we will have a better understanding of our microbe-covered planet, and how each surface and organism on Earth interact. Most assuredly, we live in a Microbial World.

About the authors: Nathan Jayne is a Ph.D. student in Dong-Er Zhang’s lab at the University of California at San Diego and studies leukemia development. He is also a triplet and has two sisters. Amanda Alker is a Ph.D. student in Nicholas Shikuma's Lab at San Diego State University, studying the bacterial cues that induce coral larval metamorphosis. She is also a NSF funded Graduate Research Fellow. Nathalie Delherbe is also a Ph.D. student in the Shikuma's Lab. She studies the interaction between marine bacteria and its influence in the life cycle of marine invertebrates. She also loves cyanobacteria.