We have the great pleasure to inform you, our Readers, that a team of microbiologists has privi­leged us with a peek into a draft of the first formal description ever offered of a particular bac­te­ri­um that has puzzled microbiologists for almost a century. For the bacterium, they propose the na­me Eliobacter woosyi, and as they can grow it in the lab on defined media there's no need for a "Candidatus" prefix. The bacterium was first isolated in the 1920s in an obscure butchery in an un­named town in southeast Poland, and by unknown circumstances made it into the strain col­lect­ion of the Microbiology Dept. at Universidad Central del Ecuador, Quito. While Gram-staining gave reproducibly ambiguous results, it was most commonly described as Gram-negative in the few surviving notes and reports of the scientists who first worked with it (an entry in Bergey's Manual is still missing though). The bacterium grows as straight, elongated rods, which are probably mo­tile, though flagella have never been observed. Early reports from Quito make mention of the ra­ther unusual polar fimbriae, located exclusively at one cell pole in the form of a "perilla" (quotation marks in the original report; perilla translates to goatee). More recent reports describe the cells of Eliobacter woosyi  as slightly curved rods, but this might be a consequence of prolonged cul­ti­va­tion in the lab and not the original phenotype. However, the newer reports are consistent with earlier reports in their mention of the "goatee"-type of polar fimbriae. Growth tests demonstrated that Eliobacter woosyi  is a mesophilic heterotroph that accepts more than a dozen different su­gars as C-source, but grows poorly on starch, and not at all on cellulose. It can grow on sugar-sup­plemented minimal media containing up to ~5% (w/v) ethanol, but ethanol is apparently not meta­bo­lized (suspiciously, the reports don't mention the method by which this was measured). Most striking, however, is the observation already mentioned in reports from Quito, dated c. 1944, that Eliobacter woosyi  thrives in the presence of curiomycin at concentrations ranging from 4 µM to millimolar. This is noteworthy as most bacteria are inherently resistant to curiomycin (>10 mM!), and the few that were shown to be susceptible develop dependency rather than resistance within a few generations (the loci responsible remain to be elucidated; Luigi Gorini's attempts to map them were unsuccessful). 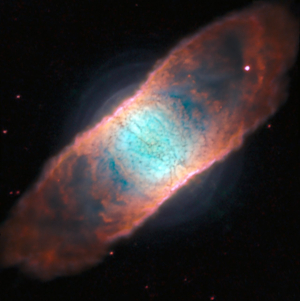 Cell of Eliobacter woosyi  shortly after transfer from minimal medium to BHI medium. Accor­ding to the authors, the color change ob­served in the center of the cell is due to the change of the medium and no sign of commencing cell division (staining method not specified). Source

The details of the growth physiology of Elicobacter woo­syi  were so difficult to work out that our colleagues said it gave them a headache and they couldn't do any better than the Copenhagen School. The cells grow slowly but, upon transfer into fresh medium, show no signs of a lag phase and only enter into stationary phase when curio­my­cin is omitted. Since the cells grow so slowly, a true 'exponential growth phase' could not be defined (they tried with semi-log paper but to no avail). They noticed during recent growth tests, however, that transfer of cells from minimal medium to solid or liquid brain-heart-infu­sion media (BHI) greatly stimulated the growth of Elio­bac­ter woosyi  but, interestingly, only in the presence of cu­rio­mycin.

Eliobacter woosyi  is, in all likelihood, non-pathogenic. There exists an obscure, previously suppressed report from the Walter Reed General Hospital, dating from the end of WW2, that mentions outbursts of Rickettsia in­fect­ions among staffers. A contemporary witness, however, suspected Eliobacter woosyi  as the actual culprit, noting that in most cases the infection was benign, yet tended to become chronic readily (which made Rickettsia an unlikely source). Another alleged, i.e., badly documented, outburst of an infection among the staff and students of the Medical School at Tufts University, Boston, MA, in the 1970s has also been attributed to E. woosyi, but clear evidence is lacking. Well documented, on the other hand, is the proficiency of E. woosyi  to persist in a proliferation-competent status on the internet. Together with a few other bacteria (and associated bacteriophages) that are generally known for their planktonic lifestyle, E. woosyi  was repeatedly found as the major component of a gooey biofilm at the fringes of the internet that, because of its persistence, has been dubbed the 'STC' (for: Story-Telling-Consortium). Interestingly, within this consortium, E. woosyi  apparently thrives in the absence of curiomycin.

The foregoing narrative was compiled after extensive studies by Christoph. Merry's reaction was as follows: Christoph's analysis reveals his deep-seated knowledge of the history of the field as pertains in particular to this unique organism. He has now submitted the initial findings as a Letter to STC for the usual peer review process. Should we recommend acceptance and publication? This reviewer considers the findings to be very well researched and presented, but questions remain. Would the bacterium in question modestly prefer to not be the subject of a post on this respected blog? Would such a post require annotation explaining some of the details, such as the BHI me­di­um, details that reveal intimate secrets of the growth strategy of this species? Other references to the evolution of E. woosyi  may not be meaningful to most readers. My initial response is that this letter would best be circulated among other members of the consortium, but may not thrive if in­troduced into a different ecosystem.

To which Roberto replied: My response to the response is that further meaning can be gleaned through extensive dialogue in the comments section, something that will most certainly increase the metabolic rates of E. woosyi. In summary, I strongly recommend acceptance and publication on this very special date. Also it should be noted that E. woosyi is not the type species for this ge­nus. In response, Christoph noted that the NCBI taxonomy webpage has no entries for 'Eliobacter' so we're free to choose a type species. Any suggestions ? Merry replied with two: Eliobacter ele­gans ? Eliobacter scriptus ? Jamie suggested Eliobacter quasibovinus  (sometimes known as "Quasi­moo-do"). But there is a single strain described for that species and it remains quite obscure. So the final consensus of the STC team was to stick with Eliobacter woosyi as the representative spe­cies. Unfortunately, the phyletic positioning of the Eliobacteraceae is pretty confusing, and at pre­sent their SRU signature would point to "unclassified gammaproteobacteria", which is sort of a junk drawer for all these bugs that we know so little about (their oriC s look pretty conventional though).

Late in the review process, Daniel commented: I would like to mention some recent unpublished results on Eliobacter woosyi  from my lab done in collaboration with an evolutionary ecologist. Al­though preliminary, I thought they'd be relevant. We've become interested in the mysteries sur­rounding E. woosyi  isolation from the environment. Though widely cultivated in the lab, anec­do­tes from researchers hold that the species is becoming increasingly difficult to isolate from the environment. This has spurred concerns, first regarding the future of studying how the domes­ti­ca­ted laboratory strain may differ from the feral ancestor. For instance, speculations include that ancestral populations of E. woosyi  may be less diverse in cell signaling (communication) mole­cul­es, allowing it to only 'talk' with a limited audience of its own native population. Another more serious concern is whether environ­mental E. woosyi  is going extinct or turning unculturable due to population shifts making it more fastidious. We therefore started a project to look at changes in E. woosyi's  genome through the years between the few environ­mental isolates that have been obtained. Additionally we made numerous attempts to reculture the species from the environ­ment or detect the presence of its genome within various environmental samples. Sadly our data suggests that E. woosyi  is gradually vanishing from the wild, with mutations building up that limit the cells' capability to divide. The reason for the evolution of this characteristic in global popula­tions is unclear. However, the good news is that this waning of E. woosyi  in the environment ap­pears to correlate with a drastic duplication and upregulation in genes involved in horizontal gene transfer. We currently favor a model where E. woosyi, though it may eventually disappear from the environment, has evolved to pass on integral parts of its genetic identity to other species. We have begun characterizing a few such cases, specifically where E. woosyi  seems to have passed the gene for curiomycin utilization to other species, greatly stimulating their growth in the pre­sen­ce of the drug, enabling them to outcompete competitors. We believe this argues that E. woosyi's  lifestyle has led to the benefit of many other bacterial species and will allow defining aspects of its unique genome to live on in microbial communities for billions of billions of bacterial generations to come.

When all the discussion was over, the STC team unanimously agreed to publish this Letter. Con­si­de­r­ing that few microbial species have so profoundly influenced their enviroments as Eliobacter woosyi  has, the team enthusiastically approved Roberto's suggestion that April 25th be recog­ni­zed universally as "Eliobacter Celebration Day." Happy Birthday Elio!