I always thought the most significant thing that we ever found on the whole goddamn Moon was that little bacteria who came back and lived and nobody ever said sh*t about it.
— Pete Conrad, American astronaut (4)

Four months after the first moon landing in 1969, astronauts from the Apollo 12 mission, Charles "Pete" Conrad, Alan Bean and Richard Gordan returned from the second moon landing (yes, there was more than one trip to the moon see here, here, here, here, and here). The Apollo 12 mission had a dual purpose. The first was to deploy the Apollo Lunar Surface Experiments Package (ALSEP) which would obtain seismic, scientific, and engineering data from the moon and radio it back to earth so NASA scientists could analyze it for years to come (5). The second purpose was to retrieve the Surveyor III television camera, which was a mere 500 feet away from the Apollo 12 landing site. From the lunar surface the astronauts traveled back to Earth with moon rocks, moon soil, the Surveyor III television camera, and something remarkable. In the foam protecting the television camera, NASA scientists found something nobody expected: live microbes. 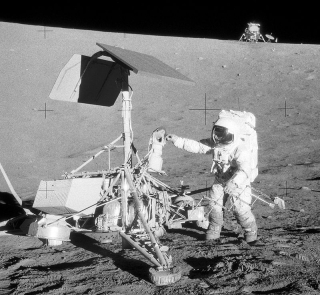 Pete Conrad grabs the Surveyor III camera with the lunar lander in the distance. Source

Inside the foam of the Surveyor III camera were 50 to 100 Streptococcus mitis, a common mouth bacterium. It is believed these stowaways somehow evaded NASA’s clean room protocol when the television camera was sent to the moon and, remarkably, remained alive on the moon for nearly three years! The S. mitis endured an utter lack of water, extreme fluctuations in both cold and hot temperatures, harsh radiation, and a lack of the usual gravity. How exactly these microbes survived on the moon is not completely understood, but the prevailing hypothesis is that the population was just large enough that the dead could sustain the living. The concept that bacteria could live in the harshness of space for years excited scientists all over the world, and potentially validated notions like the panspermia theory, the idea that life jumped from one planet to another via asteroids with microbes stowed away, dormant, deep inside the rock.

Feeling skeptical? Is it because there are no newspaper headlines from 1969 titled "LIFE FOUND ON THE MOON!" ? Or because the hunt for extraterrestrial life is still ongoing? Or maybe you feel unconvinced S. mitis could truly survive the harsh conditions of the moon. Or possibly you are simply a cynic.

The Importance of Proper Lab Technique 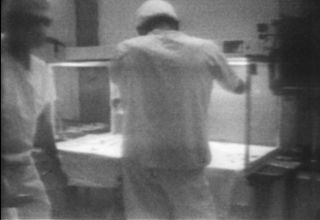 NASA astrobiologists in improper lab attire. Bare arms, hair and other skin can are exposed to lunar samples. Source

If you believed the story I told above, I admire your optimism. However, if you were skeptical of the story above you are not alone. In recent years NASA biologists have gone back into the 1969 records to see if the discovery of lunar life was truly a discovery or simply a fluke. What they found is remarkable. John Rummel, Judith Allton, and Don Morrison of NASA went through the archives of lab footage and found the source of S. mitis in the foam of Surveyor III camera: the Manned Space Center NASA astrobiologists (3). In the footage, the Manned Space Center biologists tasked with clearing the lunar samples and ensuring nothing from the moon contained any potential biohazards were, simply put, not dressed in proper lab attire and had poor lab technique. Grievously the astrobiologists were wearing short sleeved scrubs, head coverings that did not fully cover their heads, and untucked shirts. Additionally, the hood covering the camera was open below the untucked shirts, thus microbes from the room could go into the hood. Therefore, the Streptococcus mitis were most likely not stowaways that lasted three years on the moon, and were instead the astrobiologists probing into their own microbiota. So much for discovering that life can survive on the moon.

It is safe to say present day astrobiologists learned their lesson. When astrobiologists, or any biologists for that matter, work with microbial samples from the International Space Station (ISS), they wear biohazard suits to prevent similar contamination events as well as to protect themselves from any potential hostile alien microbes or life.

Other moons in our solar system may have a higher probability of harboring life. Jupiter’s moons, Europa and Enceladus, possess vast seas under a thick layer of ice that might harbor various life forms. On Saturn’s moon Titan, life is hypothesized to use liquid hydrocarbons instead of water as a solvent. However, these are stories for another time.

Is there life on our moon? I have a hard time saying 100% no. Whenever we humans proclaim there is no way life can exist in certain places such as the deep sea, hot springs, the desserts in Antarctica, etc. life always surprises us. In saying that to live on the moon would not be easy. As we know, the moon lacks any forms of water, has little gravity, experiences wide swings in temperature, and has no protection from solar radiation. Any organisms on the moon would have to survive all of those perils continuously.

For all that, we already know that certain life forms such as the tardigrade can survive the vacuum of space. Even B. subitilis spores can last approximately a year and a half in space-like conditions1. At the current moment, however, there is no evidence of any earth life form surviving extensively in space. The longest a human ever lived in space was 438 consecutive days a record held by Valery Polyakov who spent his time in the Mir space station. But let's not give up hope quite yet. Our ability to detect traces of life through advanced technology may give us an insight to trace lifeforms crawling in the lunar soil. All we need is another lunar soil sample. 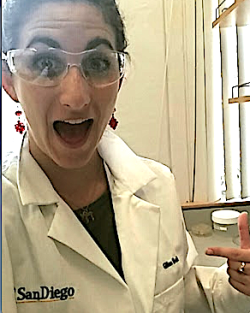 Gillian is a masters student in the Dutton lab at the University of California, San Diego