Microbes Make the Most of Milk

For the first year of our lives most of what we eat is milk. In fact, during the first four months it is the only thing we eat (Figure 1). For mothers, both breast milk and formula are popular options for getting a baby nourished, and while both breast milk and formula have the essentials needed to survive, these two forms of nutrition are not created equal. The difference has to do with microbes and what they get out of human milk.

Formula vs. Milk: what's the difference 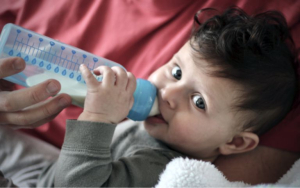 Created to mimic human breast milk, infant formula ty­pi­cally uses cow's milk as a base. Formula has saved the li­ves of many infants whose mothers could not breastfeed and is widely used as a matter of convenience by mothers who don't want to or don't have the time to breastfeed. But whether to feed your baby breast milk or formula is a controversial topic. A popular "back to the breast" move­ment advocates for a return to breastfeeding instead of using formula, with strong support from the medical com­munity. This is partly because of economic reasons and the beneficial skin-to-skin contact involved in breast­feed­ing. Breastfeeding is also a great way for a baby to obtain fresh microbes for their developing guts! And importantly for us microphiles, there is a large and growing field of research that focuses en­ti­rely on how the components of breast milk can shape infant gut microbiomes for the better.

Two observations from decades ago set the stage for discovering how consuming breast milk or formula has major consequences for microbial growth. The first observation came from microbio­lo­gists who found that breast-fed ba­bies had different intestinal microbiota than formula-fed ba­bies, which could in turn affect infant physiology. In fact, human milk was reported to contain a mysterious "bifidus factor" that promoted the growth of the beneficial gut bacterium Lactobacillus bifidus (now known as Bifidobacterium spp.). The second observation made by chemists was that human milk contained carbohydrates that were not found in cow's milk. A collaboration between the two groups led to the discovery of Human Milk Oligosaccharides (HMOs), unconjugated gly­cans that are now known to be structurally diverse and have multiple effects on the infant gut mi­cro­biome with important implications for a baby's health. 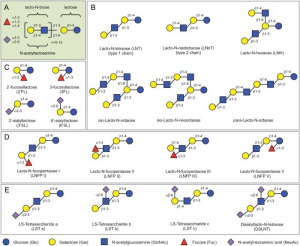 (Click to enlarge ) Figure 2. HMO blueprint and selected HMO structures. A HMOs follow a ba­sic structural blueprint. (Monosaccharide key is shown at the bottom of the figure.) B Lactose can be fucosylated or sialylated in different lin­kages to generate trisaccharides. C Lactose can be elongated by addition of either lacto-N-bio­se (type I) or N-acetyllactosamine (type II) disac­cha­rides. Addition of disaccharides to each oth­er in the β1-3 linkage leads to linear chain elon­gation (para-HMO); a β1-6 linkage between two disaccharides introduces chain branching (iso-HMO). D Elongated type I or II chains can be fu­cosylated in different linkages to form a variety of structural isomers, some of which have Le blood group specificity. E The elongated chains can also be sialylated in different linkages to form structural isomers. Disialylated lacto-N-­tetraose (bottom right) prevents NEC in neo­na­tal rats. Source

HMOs are the third largest component of breast milk be­sides water and casein, but about 99% are passed through a baby's intestinal system undigested and intact. There are more than 100 different HMO structures known, and the amounts and types of compounds present vary be­tween women and during different stages of lactation (Fi­gure 2). While babies don't use these compounds directly as a food source there are several potential benefits, in­clu­ding stimulating the growth of good bacteria and pre­venting infection by bad ones.

Perhaps the best known potential benefit of HMOs for in­fant health is that they function as a prebiotic to promote the growth of beneficial bacteria. It is thought that some beneficial bacterial species can more effectively use HMOs than neutral or potentially harmful species, and that they may be specifically "crafted" by the mother to cultivate these "good guys." For example Bifidobacterium infantis  is excellent at entirely consuming HMO for growth, and has specific operons dedicated for this purpose. Mean­whi­le, other Bifidobacterium  species are either less ef­fi­cient at or unable to utilize HMOs. HMOs also confer a growth advantage to B. infantis  over co-inoculated Bac­te­roides thetaiotaomicron  in a mouse model. How this po­tential benefit holds up in the context of a complex mi­cro­bial community is unknown.

HMOs don't just promote the growth of beneficial bacteria, they may also protect babies against infection by harmful microbes. One mechanism is by serving as an anti-adhesive. Many pathogens adhere to cell surfaces via lectin–glycan interactions and some HMOs closely resemble glycans that the pathogens attach to. Thus, they serve as soluble decoy receptors and prevent the patho­gens from actually binding to the mucosal lining and causing infection. This has been best demon­stra­ted for Campylobacter jejuni  infections, which are one of the major causes of infant mortality. HMOs also cover the mucosal lining and can competitively bind to substrates required for HIV en­try through mucosal barriers. This may explain why only 10 – 20% of infants acquire HIV through breastfeeding despite constant exposure, and demonstrates how HMOs can also protect against viral infection.

There are even more examples of the virtues of HMOs. Studies suggest that they can both directly and indirectly modulate the infant immune system. They also protect against a necrotizing entero­co­litis (NEC), which is a major cause of death and neurological complications in pre-term infants. Breast-fed infants are 6 – 10 times less likely to develop NEC than formula-fed infants. While this has been shown to relate to HMOs in a mouse model, properly controlled studies haven't been conducted in humans. There is also evidence that breast-fed pre-term infants have improved de­vel­opmental and intelligence scores later in childhood compared to formula-fed infants. This is li­ke­ly because high amounts of sialic acid, a compound important for brain development, are found in HMOs. And the potential benefits of HMOs may actually start with the mother, protecting against breast infections such as mastitis. It is worth noting, however, that some studies question whether there are any long-term differences between breast-fed and formula-fed full-term infants, and many immune system and overall physical health benefits appear to even out after the first few years of life.

So, can the seemingly huge oligosaccharide gap between breast milk and formula be bridged? Per­haps. Some formulas contain specific common HMOs or other non-digestible carbohydrates that can serve similar roles (at an additional cost, of course). The problem here is that there are so ma­ny different compounds, and they are expensive to make in a way that would net a profit. Babies eat a lot  of formula!

As far as cultivating beneficial microbiota in infants, this could potentially be done without the help of breast milk by introducing probiotic bacterial strains along with prebiotic compounds to support their growth and persistence. This combination of a probiotic and prebiotics is called a synbiotic. A recent study by Panigrahi et al. found that infants administered an oral synbiotic of Lactobacillus plantarum  plus fructo-oligosachaccharide significantly decreased neonatal sepsis and lower respi­ratory tract infections. However, the study was conducted primarily on breast-fed infants, so it is unclear whether such a method could replace some of the functions of HMOs entirely.

The magic of milk

There doesn't seem to be any strong evidence from long-term studies suggesting that breast-fed babies grow up to be better or smarter adults than formula-fed babies. Then again, I was fed formula, so perhaps I am biased. Still, no matter what you were fed or choose to feed your child or your microbes, there's no denying that human milk is amazing!

Rachel Diner is a Ph.D. candidate in Andrew Allen's lab at UCSD and the J. Craig Venter Institute in La Jolla, CA. She studies marine microbes and how they interact with each other, humans, and the environment. She is also a new mom.