More on "How to Tell Up And Down"

A Note from Elio: Coincidence would have it that shortly after we recently posted a piece that includes gravitropism, Alexander Weitzel, a student in a graduate course at UC San Diego that I co-teach with Joe Pogliano, wrote the following as part of a final exam. We post it here because it deals elegantly and in more detail with a fascinating phenomenon, how plants know which way is up and which way is down. The exam question was: "We learned in class that DNA and its counterions produces osmotic pressure that inflates the Bacillus subtilis forespore, contributing to its growth and expansion.  Search the literature and look for another example where a key biological process is thought to be driven by biophysical properties of cell constituents.  Summarize the process and how it works". 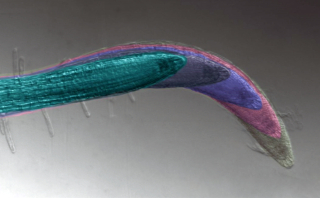 The process I will be discussing is plant gravitropism, the ability of higher plants to sense the vector in which gravity is acting and grow parallel to that vector, either in the positive direction (shoots and leaves) or in the negative direction (roots). This allows the plant to grow its leaves in the direction of a probable light source (if the seedling is buried and can't receive any phototropism signals) and its roots in the direction of probable water sources.

How does gravitropism work?

Involved are specialized cells called statocytes located in the parenchyma (in shoots) and in the columella (the root cap). I will focus on root gravitropism. Statocytes contain amyloplasts (also referred to as statoliths), free floating dense starch granules that, being heavier than the cytoplasm, naturally sediment to the bottom of cells. Plants that have had their tissue types that produce statocytes removed are agravitropic, meaning they do not respond to gravity. High powered magnetic fields that displace the amyloplasts to a region of the statocyte that is not the bottom, result in the plant growing in the direction of the displaced amyloplasts, but this response is not observed if the amyloplasts are not present. 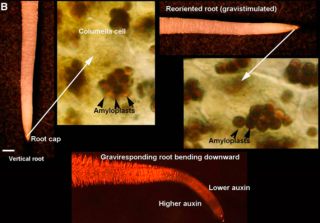 Figure 2. Images of the amyloplasts sedimenting to the new bottom (old left side) of a columella cell in a root tip after a 90o counterclockwise rotation. Source

Researchers originally hypothesized that the cytoskeleton plays a role in sensing amyloplasts displacement, similar to how a spider (the cell) uses its web (the cytoskeleton) to sense a wriggling bug (the sedimentation of amyloplasts). This does not appear to be the case, it was demonstrated that inhibition of the major cytoskeletal filament "actin" actually reduces the time it takes to observe a gravitropic response. A reasonable explanation is that such actin connectivity would make the cytoplasm thicker, making it more difficulty for amyloplasts to sediment. A defect in the actin cytoskeleton would make sedimentation easier, allowing the gravitropism response to happen quicker.

Taken all together, the root gravitropism response appears to be dependent on the sedimentation of statocytes. One other thing to note is that while the force of gravity is detected in the columella cells (at the root tip), the growth response actually happens in the proliferative zone of the root (located along the sides of the root). A downward bending action in a sideways root is achieved by increasing cell proliferation on the top of the root while decreasing proliferation on the bottom of the root. This separation between detection and response means that there must be some signaling pathway for the columella to communicate with surrounding cells to grow in a specific and responsive way. If you know anything about plants, you'd probably guess that these signals are auxins, and you would be correct. 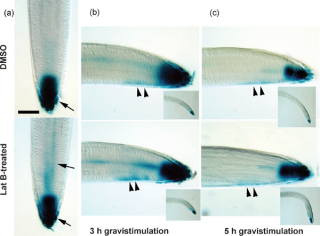 Figure 3.  When treated with Lat B (an actin inhibitor), the auxin signal (blue stain) increases. It is interesting to note how in both cases there is an auxin gradient between the new top and bottom of the root. The bottom has a greater auxin signal while the top has almost none. Source

The way that people observe root gravitropism is by rotating the whole plant 90o and watching what happens. First, the amyloplasts slowly sediment to the new bottom of the statocyte, a process that takes around 2 – 3 minutes. Shortly thereafter (minutes) a differential auxin gradient can be detected between the top and bottom sides of the sideways root (visible in Fig 3b and 3c, double triangles pointing to blue stained auxin on the bottom of the sideways root). This differential auxin gradient has been shown to be formed by an asymmetrical localization of PIN3 and PIN7 (auxin efflux carriers) upon alteration of the gravity vector (rotating the plant).

There is a problem.

The biophysical mechanism through which the plant "detects" gravity is known, amyloplast sedimentation. The signal that kickstarts the gravitropic response is known to be differential localization of auxin. The way in which those two are connected, however, is still unknown. Some people had hypothesized that there are mechanosensitive ion channels that are induced by the physical strain placed on the cell membrane by having a horizontal root, but this has been practically ruled out. Others believe that the amyloplasts are bound to chloroplasts and other organelles that interact as ligand receptors to the ER, Golgi, or plasma membrane upon sedimentation.  The evidence for this hypothesis is weak at best. As the problem stands, we know that gravitropism occurs in plant root tips, we know how the cells in the columella "sense" gravity, we know the signaling mechanism for the gravitropism response, but we do not know how these parts are connected. I think this is an incredibly interesting problem, one that deserves considerable investigation.

Among the most intricate examples of layering are sulfide-oxidizing bacteria that obtain their energy from oxidizing sulfides and use nitrate as the electron acceptor. In the shallow waters off the coast of Chile, such bacteria, in the genus Thioploca, make up gigantic mats. To quote from this blog, "sulfides are abundant in the sediment, nitrates in the water column. How to bring the two together? Thioplocas solve the problem by making tubular sheaths that stick out from the ocean's sediment. These sheaths can be as long as 15 cm. Inside them, filaments of the organisms glide up and down, gathering sulfides below and nitrate above. Thioplocas chemotax towards nitrate. They absorb it and transport it downwards, to where the sulfide is abundant, at speeds of about one centimeter per hour. In other words, thioplocas take an elevator to work." The topic of gravitropism in bacteria had an early historical mishap. It took the great Martinus Beijerinck to sort it out.

Among other examples of how bacteria travel along vertical axes, the most exciting perhaps are the magnetotactic bacteria. Again, the Wikipedia says: "To perform this task, these bacteria have organelles called magnetosomes that contain magnetic crystals. The biological phenomenon of microorganisms tending to move in response to the environment's magnetic characteristics is known as magnetotaxis (although this term is misleading in that every other application of the term taxis involves a stimulus-response mechanism). In contrast to the magnetoreception of animals, the bacteria contain fixed magnets that force the bacteria into alignment – even dead cells align, just like a compass needle The alignment is believed to aid these organisms in reaching regions of optimal oxygen concentration."

So here you have it, when it comes to gravitropism, animals, plants, and mushrooms all tell which way is up or down using tiny weights: small pebbles, organelles, and nuclei, respectively. Bacteria, when facing up-and-down related challenges, use external signals other than gravity, mainly by sensing chemical gradients, magnetism, and light. Chaque'un a son goût, but in Biology each taste works perfectly well to respond to a particular environmental trial. Vive la Vie! Alex Weitzel is carrying out his PhD in the Cooper Lab at the University of California, San Diego.