You may have seen the movie Phantom Thread. Starring Daniel Day-Lewis, it got six nominations for Academy awards. And it deals with mushrooms, something that doesn't happen in movies very much.

Here's the plot, in brief. A London couturier who sews for the upper classes gets into a romantic re­lationship with a younger woman. In time, trouble ensues, and she decides that in order to keep him under her control, it would be a good idea to feed him poisonous mushrooms. In his sickened state, he surely would become more tractable. Under the tutelage of an elderly woman, she goes out on the grounds of their summer estate to pick some mushrooms. After consulting a book, she cooks them up and serves them in a tea to her paramour. He vomits up a storm, then collapses at an inconvenient time as he works on a dress for a Belgian princess. In the process, he damages it, requiring his staff to work on it all night to fix it. He must take to bed, where he has a visual hallu­cination of his long-departed mother standing near him. The effects of the mushroom work so well that as time passes, a new treatment is called for. Back she goes and picks more mushrooms and, for a change, cooks them up in an omelet. This time, he eats them knowingly. The movie ends. 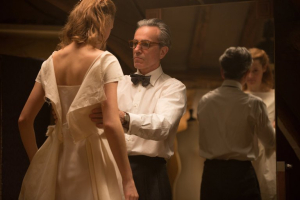 If I had been asked about the use of poisonous mush­rooms for this purpose, I might have said that it could work, but it is chancy. It would help if the perpetrator knew how to distinguish the desired mushroom from others. Besides, any mushrooms species is found at certain times of the year only and under the right wea­ther conditions. Also, the looked-for species better be common in the locality.

But what was the identity of the mushroom in the movie? Given the symptoms, which include severe nausea and vomiting, followed by prostration and hallucinations, the choices seem limited. What comes to mind is Amanita muscaria, the red-capped white dotted fly agaric that produces a variety of symptoms, the present ones included. It is common in Great Britain and easily recognizable. However, that's not it. A very short clip in the movie shows that the mushroom had gills that were brown in color, whereas tho­se of A. muscaria are white. We are left with few choices. A number of poisonous brown-gilled mushrooms may account for some of the symptoms, but species that generate this particular ar­ray are not common.

So, is the mushroom in the movie an invention of the director? Why not? The plot is pretty fanciful, so why not a bit of mycological license? I suppose that poisonous mushrooms may have been used with the intention of altering human relations, but if the purpose is to make one's partner sick, surely there are more foolproof ways to achieve this. Leave the mushrooms be!