If per chance you hear the phrase "press disturbance" you might conjure up images of chaotic news media. What with all the disturbing reports of fake news going around these days, who could blame you? At least, that was my first reaction when confronted with the term "press disturbance." But worry not reader, this post will not delve into any form of yellow journalism. It turns out that in ecology, press disturbance has a very specific meaning (and many of you are probably well aware of it already). Whenever any ecosystem under observation undergoes a stressful change it is cal­led a disturbance. To distinguish short-term from long-lasting disturbances, the terms pulse dis­turbance (short term) and press disturbance (long term) were coined. In the initial definitions, as applied to "large things" (as compared to the "small things" we consider in this blog), pulse distur­bances would emcompass such thing as droughts, where the number of members of the different species occupying the ecosystem would vary greatly but none would be irreparably lost. In contrast, press disturbances would involve a prolonged stressor that so changes the ecosystem as to change it permanently. But (and in particular as they apply to microbial ecosystems) the terms are now used to refer simply to short term versus long term environmental stressors, relative to the gene­ration times of the community members. From this perspective, a press disturbance would be a stressor that, due to its duration, has the potential to alter communities beyond the possibility of recovery. It is indeed a very interesting question to pose: Will microbial communities that undergo press disturbances have the resilience to bounce back to their pre-disturbance state or will they be altered forever? One possibility might be to ask whether a person's gut microbiome is or is not resilient to the press disturbance of months-long antibiotic therapy? For an example of how this question has been addressed see here. But of course, there are myriad other press disturbances on microbial communities worthy of investigation. With the increase of anthropogenic influences in diverse natural settings, it is interesting to investigate the effects on microbial communities that human-initiated press disturbances have already had. One particular example that drew my atten­tion recently involves the somewhat bizarre phenomenon of coal mine fires. 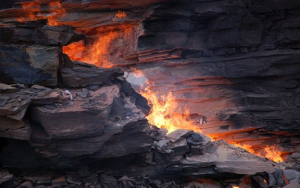 Figure 1. Image of a coal fire that has been burn­ing since 1916 in Jharia, India. Source

Fires in underground coal deposits occur naturally, with some of them burning for millennia. However, the num­ber of coal fires has increased dramatically worldwide since the Industrial Revolution as a result of human acti­vi­ties, primarily mining. This is because once mines are abandoned coal seams left exposed can easily ignite. Worse yet, abandoned mines are often the sites of land­fills and the trash deposited there is often burned and quite often this leads to the triggering of coal fires. Once a coal mine fire starts it is virtually impossible to extin­guish. Some of the fires that were started by human ac­tivity have been burning for centuries. The fires continue to rage underground as they follow the very large coal seams. It is estimated that there are thousands of uncontrolled coal mine fires burning around the world today. One of the most insidious examples is the fire burning in Jharia, India, which started in 1916 (Fig. 1). Strangely, there are villages on the areas affected by the fire, an indication of the extremes under which humans can live. Perhaps the most infamous coal mine fire burning in the United States is the one in Centralia, Pennsylvania. 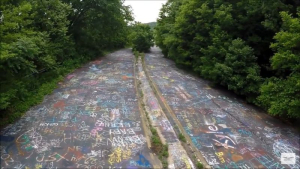 Figure 2. Grafitti on an abandoned section of sta­te highway 61 which crosses the now nearly ab­andoned town of Centralia, PA. Source

The town of Centralia, Pennsylvania was incorporated in 1866 as a result of coal mining in the region during the mid-1800s. Centralia's population peaked in 1890 at a little bit under 3000. The population decreased as coal mining activity slowed down but there were still about 2000 peo­ple living in Centralia in 1962. Around Memorial Day of that year, in an effort to clean the town dump the trash lying there was burned. Unfortunately, the dump was located on the remains of an abandoned strip mine and the exposed coal seams caught fire. Efforts to contain the fire proved ineffective. As a consequence, Centralia is now a ghost town; at last count Centralia had seven remaining residents in 2013. There is certainly an eerie feeling for anyone visiting this abandoned town, something that can be appreciated from the graffiti covering the abandoned section of state highway 61 (Fig. 2). And the fire still burns and it is predicted to burn for at least another century. While humans have almost completely aban­doned Centralia, what has happened to its microbial inhabitants?

The members of the laboratory of Ashley Shade at Michigan State University were interested in answering precisely that question. To this end they set out to sample the soils of Centralia to as­sess the effects of the coal mine fire on the composition of microbial communities therein. First, of course, they had to have information on the progress of the fires that burned underground. They were fortunate in that regard because the work had already been largely done for them by Jenni­fer Elick of Susquehanna University and published in 2011. Using thermal infrared imagery and compiling lots of prior data, Jennifer had determined that there were two fire fronts advancing east to west at a rate of about 2 meters/year. As the fire burned underground, the soil tempera­tures at the surface increased, sometimes reaching 80˚C. But, as the fire expanded into new areas, it also retreated from some of the previously affected sites. Thus, the advancing fire pro­vi­ded a perfect scenario of press disturbance, where some areas were affected by the higher tem­pe­ratures due to the fire for several years but were then returned to their prior temperatures as the fire expanded to new areas. 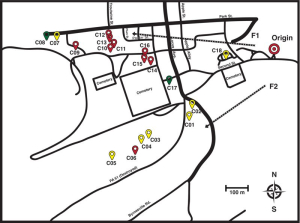 Now, the changes in the microbial community com­po­si­tion could have been followed along time at individual sites in a longitudinal study. But that, of course, would have required surveillance and sampling over many years. The alternative was to carry out a crossectional analysis, sampling surface soil at many sites along the fire trails such that some sites were unaffacted (refer­ence), some had been affected but were back to normal temperatures at the time of sampling (recovered), while others were still in the midst of years of being fire-affec­ted. That is exactly what Ashley Shade and co-workers did. During October 5th and 6th of 2014, they collected soil samples along the two westward moving fire fronts (Fig. 3). In total they collected soil samples from two unaffected sites, seven recovered sites and nine fire-affected sites. They took the samples to the lab and proceeded to carry out extensive microbial community composition analyses.

(Click to enlarge )
Figure 4. Within-sample (alpha) diversity of fire-affected, recovered, and reference soils in Cen­tralia for bacterial and archaeal community (a) phylogenetic diversity (all P<0.001); (b) richness (total no. observed OTUs clustered at 97% se­quence identity, all P<0.001); and (c) evenness (all P not significant). Source

They analyzed the microbial content of their samples using two experimental approaches. For one, they cal­cu­lated the number of cells per gram of soil by sepa­ra­ting the cells from the soil, followed by staining and mi­cro­sco­pe imaging. From this they concluded that here were no statistically relevant differences in cell numbers across the three types of samples. For their second approach they used the sine qua non of modern day microbial eco­logy: direct nucleic acid extraction from the samples fol­lowed by amplification and sequencing. In their case, they limited the analyses to bacterial and archaeal small subunit (16S) rRNA sequences. Through quantitative PCR they determined that the numbers of 16S rRNA copies per gram of dry soil show­ed no statistically significant differences across all samples, consistent with their cell count results. From this the authors concluded that the "overall communi­ty size is relatively stable across the fi­re gradient and that any changes in community structure along the fire gradient are due to chan­ges in member abun­dan­ces rather than to differences in the total number of individuals (commu­ni­ty size) among soils." So, how different were the abun­dan­ces of different members of the samp­led microbial communities? As perhaps might be expect­ed because of the selection imposed by high temperatures for prolonged periods, the fire-affected soils showed the lowest within-sample diversity, the lowest species richness and were the most un­even with respect to the distributions of the species present (Fig. 4). Clearly, the high temperatures had driven down the microbial diver­si­ty in fire-affected samples. 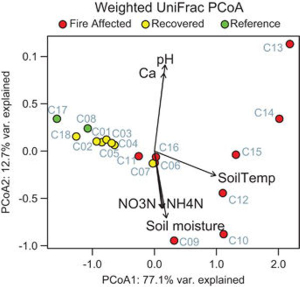 How similar or dissimilar were the communities of each of the samples? To assess the extent that each communi­ty resembled the others, the authors applied principal co­ordinate analysis (PCoA) to their data. Simply put, PCoA is a method to visualize the level of similarity of individual cases of a multivariate dataset. Importantly, this visuali­za­tion method makes apparent which variable accounts for most of the dissimilarity among individual cases. The results of PCoA analyses of the Centralia soil samples showed two remarkable facts about the different samples (Fig. 5). First, the fire-affected samples (red dots) were the most dissimilar. Not only were these samples unlike the reference and recovered samples, they were extremely dissimilar from each other. The high temperature (which proved to be the variable with the most explanatory va­lue) led to extremely different microbial communities. The authors suggest that these extremely dissimilar out­comes could be the result of very different dormant (that is, non-growing) species present in low abundance in soils prior to the fire reaching them but which served as "seeds" that grow and take over once the fire affects the soil. Second, and perhaps most remarkab­ly, the recovered soil samples (yellow dots) are quite similar to each other and – most importantly – are similar to the reference soil samples (green dots). The conclusion: after fire affects the soil communities, sending them to quite divergent extremes, the communities recover and return to being close to their original state once the fire subsides. In short, soil microbial communities in Cen­tralia, in contrast to its human community members, showed robust resilience after this press dis­turbance. Consider this then: If at times you feel overwhelmed by the consequences of the press disturbance that the anthropocene as a whole is signifying to our planet, you might find solace in the thought that once the impact of human activities decreases, the planet's microbial inhabitants will have the resilience to repair the damage we have done.