Not long ago, perhaps while we were still in grade school, bacteria were thought to be lonely, inde­pendent and utterly unicellular organisms. Bacteria were seen as mere clones of their "mother" bacterium from which all fellow colony-inhabitants originated, perpetually competing for food and space. This, of course, was a gross oversimplification. Bacteria and archaea (see here), aggregate to form multicellular communities that behave as a single organism and cooperate to keep this "self" alive. We call these biofilms, and they are the most abundant form of microbial life on Earth. Comparable to a city that requires a variety of industries to thrive, bacterial cells survive their rough environment by working together.

Figure 1. The life-cycle of a Bacillus subtilis  bio­film. This process occurs in stages which com­prise the development, maturation and disas­sembly of the community. Motile cells with fla­gella differentiate into non-motile matrix-pro­du­cing cells that become organized in chains and are surrounded by extracellular matrix (or­ange). In mature biofilms matrix-producing cells sporulate (dark brown spores). In aged biofilms the cells disperse in the environment. Modified from Source. Frontpage: Model describing growth-rate oscillations and the interactions between two biofilms. Source

The aggregation of bacterial cells, it turns out, is depen­dent on environmental changes such as variation in nu­trient availability. However, little is known about how mi­crobial cells communicate to function as a single organ­ism. And beyond that, do individual biofilms communica­te with others? So, the first fun fact for today, the answer is yes – they compete and even cooperate to survive in the same niche. But what is the signaling that takes place between biofilms? How do different biofilms communica­te, compete, or cooperate?

How Do Individual Biofilms Talk to Each Other?

Here's a scenario to answer these questions. Imagine a microscopic land where two cities, each composed of bac­terial biofilm, coexist. Their land is provided with a steady flow of nutrients, which is all that the two biofilms need to grow. Sounds like a paradise, heh? But what happens when the nutrients get to be limit­ed? Now, another fun fact: as biofilms grow, they engage in collective growth-rate oscillations. Ra­pid growth of the biofilm results in a shortage of nutrients for those bacteria living in the center of the 'city.' This nutrient stress inhibits growth until the biofilm takes-up enough nutrients to supply the bacteria in the center. These can now start to grow again. Therefore, the expansion of the bio­film colony behaves in an oscillating manner, stopping and re-starting growth. Thus, there are per­iods of eating, growing, and eating again. Understanding this, we could easily think of a solution for neighboring biofilms competing for the limited nutrients. They could simply agree to take turns to eat! That way, each biofilm can have 100% of the nutrients when it is its turn, instead of having only 50% when both are competing. It turns out that bacterial biofilms are indeed smart enough to apply this strategy! 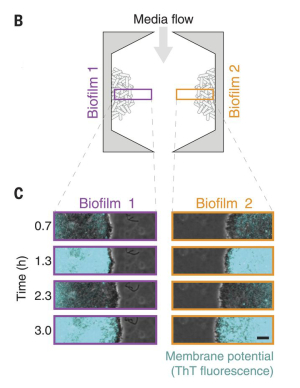 Figure 2. Microscopy set up and biofilm. B) mi­cro-fluidic chamber diagram C) Showing the growth of biofilms 1 and 2. Can see synchro­ni­zed growth at 1.3 and 3.0 hours. Source

A recent study by the Süel lab at the University of Cali­for­nia San Diego showed that communication between two Bacillus subtilis biofilms coordinates this kind of survival strategy. B. subtilis is a bacterium often found in a bio­film in soil. In these experiments, biofilms of this organ­ism were not in direct contact but were close to one another. They shared glutamate as the food source re­quired to synthesize the proteins required for growth. The biofilms respond to glutamate starvation through growth-rate oscillations. Glutamate also plays a role in communication, by binding to ion channels in the bacte­rial membrane, which allows an inflow of positively charged potassium ions. This creates an electrical signal that is used in inter-biofilm communication.

The authors grew two biofilms in a microfluidic chamber that allowed continuous flow of a medium enriched with glutamate (Fig. 2). They visualized the oscillations of growth rate by plotting expansion rate of the colonies against time (Fig.3). The phase difference between the curves of biofilm 1 and 2 describes the difference in growth rate oscillations. In-phase means synchronized oscillation, anti­phase, time-splitting oscillation. They observed communication via electrical signaling using a spe­cific dye as an indicator of the bacterial membrane potential. 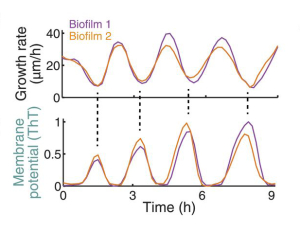 Using time-lapse phase-contrast microscopy, Süel et al. found evidence to support their hypothesis. They show­ed that the two distant biofilms could exhibit syn­chro­ni­zed oscillations in both growth rate and electrical sig­nal­ing, suggesting that the two biofilms can interact and couple their oscillations (Fig. 4).

As we said already, one approach biofilms can use to overcome nutrient limitation is to take turns feeding, a so-called time-sharing strategy. Besides competition, communication strength also plays an important role in the community's decision making to grow or eat. Süel and colleagues used a mathematical model to further predict how these two factors affect growth-rate synchronization using glutamate as the only food source. Before proceeding, they made a few assumptions. One, that these biofilms were communicating through potassium ion channels and that this communication could be coupled to the growth dynamics of the biofilms. Two, that com­mu­nication would increase at higher glutamate concentrations because of its role as a regulator of ion channel activity.

Lastly, the model further predicts that the transition to antiphase dynamics depends on the strength of the competition. To test this, the researchers made mutants in gltA (ΔgltA), the glu­ta­ma­te synthase gene. These strains cannot synthesize their own glutamate and rely solely on glu­tamate added to the medium. Indeed, here the glutamate concentration had to be increased by 25% to generate the predicted in-phase os­cillations between ΔgltA biofilms (Fig. 4D). 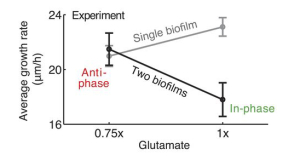 Figure 5. Two biofilms have a higher growth rate than a single biofilm when less glutamate is present. Source

Both mathematical modeling and experimental ob­ser­va­tions suggest that in response to nutrient starvation, bio­films resolve conflicts with their neighbors by switching to a time-sharing strategy. Time-sharing allows biofilms full access to the resources during their growth period instead of only half of the resources if they grew in syn­chrony. In the presence of low concentrations of gluta­mate, biofilms grow at a faster rate (by taking turns to access all the resources) than biofilms that competed at higher glutamate concentrations. This is quite the op­po­site to the growth of a single biofilm, which positively correlated with glutamate levels (Fig. 5). The authors suggest that this is the re­sult of going from resource-splitting to time-sharing.

The work of Süel's lab shows that when resources are limited, biofilms had the "intelligence" to implement a resource-sharing stra­tegy in order to resolve conflicts with neighboring biofilms. The results demonstrated the benefits of time-sharing and that the growth of biofilms can be affected by both the nutrients and a resource-sharing strategy.

The researchers have set up a robust model to better understand the communication among biofilms, creating the basis for further investigating the communication and growth strategies in the more complex environments where microbiomes are found. Future studies might focus on testing the coupling between communication and competition for food even between biofilms formed by a variety of species. Does such cooperation occur only in bacteria from the same species, which have evolved to help each other colonize the same niche or host, or are these dynamics intrinsic characteristics of all biofilms, independent of their species?

This work raises several other questions: is there a minimum distance needed for biofilms to communicate? Also, since glutamate is used for both electrical signaling and as a food source, what would happen if the strength of competition and communication were uncoupled?

A fundamental question remains: why do biofilms choose a seemingly altruistic time-sharing strategy for survival instead of the unilateral consumption of the scarce nutrient? That's a story for another day! 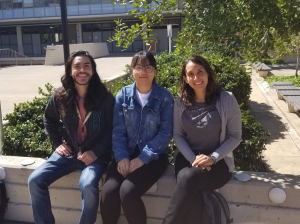 Nathan Aaron and Yao are biology graduate students at the Uni­versity of California, San Diego and Maria Isabel at San Die­go State University.