The death of Stanford's Charley Yanofsky on March 2018 at age 92 marks a significant punctuation mark in the history of genetics and molecular biology. Charley was a remarkable person in all as­pects of life, including in his interactions with family, friends, colleagues, students, and postdocs. Truly a man of many talents and one looked up to and fondly admired by all.

Charley's truly fundamental scientific accomplishments made him one of the world's most influen­ti­al geneticists. He was a member of prestigious academies and among many honors received the Lasker Award, the Genetics Society of America Medal, and the National Medal of Science. 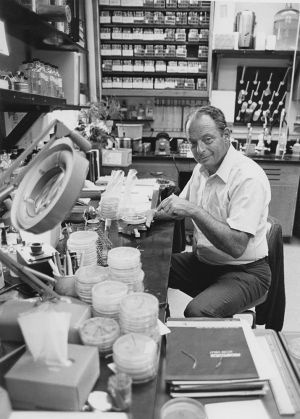 His research focused on the regulation of trypthophan bio­synthesis in E. coli, Bacillus subtilis  and Neurospora cras­sa. By aligning genetic mutations in the trpA  gene with amino acid changes in the TrpA protein, his lab pro­vided in vivo support for the one gene–one enzyme hy­po­thesis proposed earlier by Beadle and Tatum. His lab also found out that mutations altering the codon read by a particular tRNA could suppress a mutation by inserting a wild type amino acid at the incorrect codon – so called suppressor mutations – thus revealing an important fle­xibility in gene expression. Notably, his lab discovered transcription attenuation, a form of gene regulation that depends on transcription termination in the 5' un-trans­lated leader region of the operon – a region termed the transcription antiterminator (see frontpage).

Those of us fortunate enough to have worked under Charley's friendly guidance have been extremely lucky. We probably would not have had our careers, but for him. He immediately made new comers to his laboratory welcome and his office was always open to all. Everyone in his lab, from visiting Professors to dishwashers and media makers were equal participants in the larger operation. Notably included was Virginia Horn / Vania (Ginny), without whom many in Charley's lab would have had a hard time. Ginny was with Charley for 42 years. Charley also liked to do get his hands dirty at the bench, which often led to publications of his (and Ginny's) work.

The Yanofsky home was a most hospitable place for his lab "family". We have fond memories of the warm welcome we received there. After animated scientific discussions, we played competitive games of croquet in the back lawn followed by coffee and dessert.

Iwona Stroynowski, another Yanofsky alumna, writes: "Anecdotal reminiscences of Charley are his coming in early in the morning and feeding his fish in the aquarium by his office, his love of his flower boxes on the walkway outside, or making tours of his lab on Friday afternoons with a screw­driver and other tools, looking for things to fix. Or getting angry and writing scathing res­pon­ses to Cell editors for commenting that bacterial models are less scientifically interesting than mammali­an ones. Or explaining, when there was an ongoing war between virologists about ownership of HIV discoveries, that each field is defined by the founding fathers and that the tone of the discus­sion and the criteria for recognition are in great measure dictated by people who serve as role mo­dels for their followers." Indeed.

The greatest legacy Charley left us is that success in science is, in good measure, provided by those who serve as role models. Charley took that responsibility seriously and, upon reflection near the end of his career, that was the accomplishment of which he was most proud. Thank you, Charley. 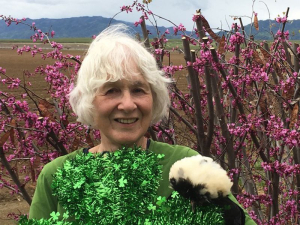