We had learned earlier that Philanthus triangulum beewolves – solitary digger wasps that prey on bees, hence their name – employ a "cocktail" of nine different antibiotics to protect their offspring from detrimental fungal infections. The antibiotics are produced – I repeat from the earlier post – by a bacterial symbiont, 'Candidatus Streptomyces philanthi' (Figure 1), which the females cultivate in antennal glands and secrete into the brood cells prior to oviposition (=egg-laying). They are ta­ken up by the larvae and incorporated into their cocoons, thereby protecting them against fungal infections. Weeks or, after hibernation, months later, eclosing adult females acquire the bacteria from the cocoon's surfaces, thus completing the vertical transmission of the symbiont. 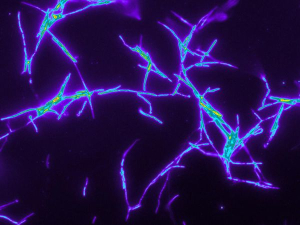 A recent study by the Kaltenpoth lab at the Institute of Mo­lecular Biology in Mainz, Germany, revealed that the Streptomyces philanthi symbionts of 25 studied beewolf species produce a stunningly rich assortment of altoge­th­er 49 compounds belonging to three classes of antibiotics. How is this diversity of antimicrobial compounds gene­ra­ted at the molecular level? Can synergistic or antagonistic interactions of compounds present in the mixture affect their activity against potential pathogens? Answers to these two questions would allow the researchers to ad­dress an even more interesting topic: how did the anti­biotic mixture change over evolutionary timescales and to what extent do the patterns reflect phylogenetic con­straints and ecological adaptations? But first things first...

There are 130+ described Philanthus species that hunt bees – some prefer bumblebees – on all continents. Yet, an earlier study had shown that each of 28 analyzed Philanthus species harbor one strain, or lineage, of the Streptomyces philantri symbiont. To assess the full spectrum of anti­biotics synthesized by the various S. philantri lineages when symbiosing with "their" beewolf spe­cies, Engl et al. collected cocoons and females from various locations in the Americas, Africa and Europe, determined 25 species, and analyzed extracts by mass spectrometry. State-of-the-art mass spectrometers can detect minute amounts of virtually any chemical substance in complex mixtures, qualitatively and quantitatively. But assigning peaks in mass spectra to particular com­pounds still requires detective skills and, of course, access to extensive reference spectra libraries. In several instances, the researchers had to actually count the ions to determine concentrations because reference substances for calibration weren't commercially available. 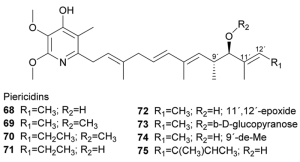 They found, in total, 49 symbiont-produced (putatively bioactive) compounds, 9 of which had been found pre­viously in other streptomycetes, 9 already identified in Philanthus triangulum, and 31 newly identified. Of these compounds, 45 were piericidin derivatives, 3 strep­to­chlo­rin derivatives, and one was nigericin. The astonishingly varied "bouquet" of piericidin derivatives prompted the researchers to compare, at the sequence level, the pieri­cidin biosynthetic gene cluster (PKS) of Philanthus tri­an­gulum with corresponding gene clusters of other Strep­to­mycetes that had been studied for piericidin synthesis. They found a perfect match of gene order, and protein similarities in the 65% range. This suggested to them that the S. philantri piericidin synthesis machinery works in a more relaxed fashion, with the derivatives brought about by va­ri­a­tions of the "normal" pathway. Such 'variations' could include incorporation of different pre­curs­ors (for biochemistry experts: methylmalonyl-CoA and/or malonyl-CoA) in the initiation step as well as in the elongation steps of the linear polyketide chain, or skipping some steps entirely, and, lastly, variations in the post-PKS 'tailoring steps' of amidation, cyclization, hydration, and methyl­a­tion of the polyketide chain (Figure 2). That's clearly a more economic approach to stock‑up a phar­macy's assortment than running a separate production pipeline for each drug! Interestingly, the beewolves' pharmacies are not equally well stocked: while the researchers detected 46 compounds in the Philanthus triangulum subsp. triangulum sample, there were only 6 in the Philanthus albo­pilosus sample. However, most samples contained between 10 and 20 compounds at varying con­centrations. In conclusion: the compound mixtures were similar but no exactly alike, each specific for a single beewolf–S. philanthri  symbiosis rather.

The art of mixing antibiotics

Figure 3. Bioactivity of different combinations of piericidin A1 (PA) and B1 (PB) and streptochlo­rin (SC) in agar diffusion assays against A M. guil­liermondii, B Y. lipolytica, and C A. oryzae. Anta­gonistic effects (i.e., significantly lower in­­hi­bi­tion zones of mixtures than one of the sin­gle substances) are highlighted by magenta box­es (according to ANOVA and Tukey HSD post hoc tests; *P < 0.05, **P < 0.01, ***P < 0.001). Source

Not only the number of compounds and their amounts affect a mixture's biological activity but also their syn­er­gis­tic and/or antagonistic interactions. To learn more about such interactions, Engl et al. performed agar dif­fusion assays with combinations of the three most ab­undant ingredients, piericidin A1, B1, and streptochlorin, against three different fungi, Aspergillus oryzae, and the yeasts Yarrowia lipolytica and Meyerozyma guillier­mon­dii. Piericidin B1 did not influence the activity of piericidin A1, but it enhanced inhibition of streptochlorin against Y. lipolytica, and decreased the combined activity of pieri­ci­din A1 and streptochlorin against M. guilliermondii. Strep­tochlorin, on the other hand, generally increased the ac­tivity of piericidin B1 but reduced the inhibition of yeasts in mixtures containing piericidin A1 (Figure 3). Although they used just three fungi as proxy for the unknown nature of the fungal microbiota at the sample sites and tested them with only 3 of the 40+ compounds in combinations, the authors found both synergistic and antagonistic interactions. They can thus safely 'extrapolate' that even subtle chan­ges in the composition of the antimicrobial mixture are likely to differentially affect opportunistic pathogens, and may allow for fine-tuning the antimicrobial defense to local pathogen com­mu­ni­ties. Also – and this may partly explain why the beewolf–Streptomyces symbiosis has not not run into an 'Antibiotic Resistance Crisis' during the past ~70 million years: a combination of antibiotics can slow down the evolution of resistance in potential pathogens for two main (known) reasons. First, if at least two compounds in a mixture act antagonistically, a microorganism that evolves re­sistance to one of the compounds experiences a higher effective inhibition by the remaining com­pound and thus has a decreased fitness compared with nonresistant cells. Synergistically acting compounds, on the other hand, favor a faster evolution of resistance because any arising re­sis­tance mutation against one compound quenches the synergistic inhibition. Second, intrinsically nontoxic compounds in a mixture can boost the activity of inhibitory compounds by neutralizing resistance mechanisms (a well known example: the non-antibiotic β-lactam analog clavulanic acid inhibits certain β-lactamases).

Evolution of a pharmacy 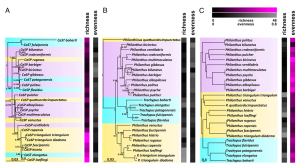 (Click to enlarge ) Figure 4. Phylogenetic and geo­graphic influence on richness (number of com­pounds) and evenness (Shannon's E, roughly: proportional distribution of the components in a mixture) of the beewolf symbiont-produced an­tibiotic mixture. A Symbiont phylogeny (CaSp: 'Candidatus Streptomyces philanthri'), B host phylogeny, and C dendrogram based on a lo­ga­rithmic distance matrix of sampling locations, all in comparison with heat maps displaying compound richness and evenness. Species are color-coded by sampling location (purple, North America; blue, South America; orange, Europe/ Africa). Richness and evenness heat maps are presented in color if a significant phylogenetic (Blomberg's K) or geographic (PGLS) influence was detected; otherwise, they are presented in gray. Branch numbers in the phylogenies are Bayesian posterior probability values. Source

By molecular phylogenetics, Kaltenpohl et al. had traced the origin of the beewolf–S. philanthri symbiosis and its coevolution back to an ancestor of the Philanthini tribe some 70 million years ago (and had, by the way, obtained indications for rare horizontal symbiont exchange among different beewolf species). This allowed Engl et al. to as­sess the intriguing questions: how did the symbiont-pro­duced antibiotic mixture change over evolutionary time­scales and to what extent do the patterns reflect phy­lo­geny constraints and ecological adaptations? Such ques­tions can be tackled by applying a battery of statistical methods that pull out significant correlations in multi­va­ri­ate data tables, that is, distance matrices. One of the dis­tance matrices represented the Philanthini phylogeny, the second the phylogeny of the symbionts, and the third the sample sites (expressed as logarithmic distances of the sampling locations). The antibiotic mixtures were con­verted into distance matrices to account for the different numbers of compounds (richness) and their proportional abundance (evenness). They found that while the number of compounds (richness) was influenced by the phyl­oge­ne­tic background of the symbiont (Figure 4 A), the even­ness of the mixture was significantly influenced by geo­graphic location, suggesting an adaptation to the local en­vironment (Figure 4 C). The authors summarize: "The first finding is consistent with evolutionary changes in the genetic basis of secondary metabolite biosynthesis that limit or expand the number of produced compounds. The second finding suggests an environmental influence on the quan­ti­ta­tive expression of compound biosynthesis. Such expression changes presumably allow for rapid adaptations to the local environment (temperature, humidity, soil microbial community) by quan­ti­tatively adjusting the composition of the antibiotic mixture." 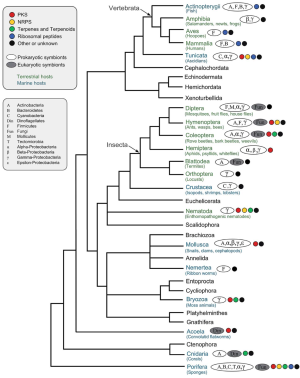 The term 'defensive symbiosis' was not coined in con­trast to 'nutritional symbiosis' (for example, the aphid–Buchnera symbiosis), but rather to emphasize a some­what different "goal." The beewolf–Streptomyces sym­biosis is an example for such a 'defensive symbiosis' among Eukaryotes and Bacteria, in which a cocktail of compounds produced by a single symbiotic bacterial strain is capable of providing efficient protection for the eukaryotic host against an array of opportunistic bac­te­rial and fungal pathogens. But this is not a unique evo­lu­tionary somersault. Flórez et al. reviewed in 2015 the then known 'defensive symbioses' – 19 and counting – and point to an interesting feature found repeatedly among animal–microbe protective associations: the si­multaneous employment of multiple defensive che­mi­cals, produced by either a single or several symbiotic partners (Figure 5). Call this 'combination prophylaxis',  an approach that starkly contrasts with the conventional prophylactic approach to prevent infections in surgery patients by using a single broad sprectrum antibiotic.

And there is another, more application-oriented aspect that Flórez et al. mention: "Animal–microbe defensive symbioses ... are a promising research target for the field of natural products discovery, due to their immense che­mi­cal potential and the advantages of studying the mi­cro­bial producers directly embedded in an ecological context (i.e. fulfilling a role for their eukaryotic host), as opposed to free-living microorganisms. Furthermore, discovered natural products are more likely to be applicable in medical contexts, since they have been naturally tested for side effects on, at least some, eukaryotes." Which is, in my opinion, a pretty good argument when it comes to de­ve­loping promising strategies to tackle the antibiotic resistance crisis (see here and here for a fairly recent two-part 'situation report').