Mycorrhizal fungi are known to carry out many activities beneficial to plants, such as transporting water and nutrients, protecting against pathogens, and permitting communication between plants. Do they also carry pathogens such as viruses or bacteria? If no, why not? Read more →

Aaron Angerstein, Maria Isabel Rojas, and Yao Yao | Not long ago, perhaps while we were still in grade school, bacteria were thought to be lonely, independent and utterly unicellular organisms. Bacteria were seen as mere clones of their "mother" bacterium from which all fellow colony-inhabitants originated, perpetually competing for food and space. This, of course, was a gross... Read more →

by Elio | Let's risk an exaggeration. Stanley Falkow, whose recent death we mourn, could be called the modern embodiment of Robert Koch. The risk here seems reasonable because the parallels are remarkable. Like Koch, Falkow started a whole school of research, this one focused on molecular bacterial pathogenesis. Read more →

by Christoph | This post features electrons, which are among the smallest things possible. There are, of course, even much smaller things than electrons but this blog keeps clear of the quantum realm, most of the time. Yet to make up for the electrons' teensyness – if they could keep still some 4 × 1021 would fit into... Read more →

by Cathy Squires | The death of Stanford's Charley Yanofsky on March 2018 at age 92 marks a significant punctuation mark in the history of genetics and molecular biology. Charley was a remarkable person in all aspects of life, including in his interactions with family, friends, colleagues, students, and postdocs. Truly a man of many talents... Read more → 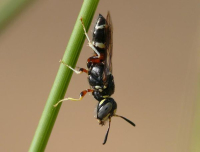 by Christoph | We had learned earlier that Philanthus triangulum  beewolves – solitary digger wasps that prey on bees, hence their name – employ a "cocktail" of nine different antibiotics to protect their offspring from detrimental fungal infections. The antibiotics are produced – I repeat from the earlier post – by a bacterial symbiont, 'Candidatus Streptomyces philanthi', which the... Read more →

The Loss of An Old Army Buddy

by Elio | Allan Campbell died recently, and science lost an eminent microbial geneticist. He discovered truly central mechanisms in phage biology, for example, how temperate phage integrate into the genome of their host and how they exit from it (the Campbell Model). And I lost a treasured pal, as Allan and I were... Read more →

by Elio | "Happy is he who was able to know the causes of things" is a statement by the Latin poet Virgil (70 – 19 BCE) that I have carried with me for some years. I don't mean to suggest that I had a classical education, although I might have acquired one had my family not have to... Read more →