Three months ago, I introduced to this blog the "Ocean's Tiniest Predator" based on a very recent pa­per by Kamennaya et al. (2018) who claimed to have identified Braarudosphaera bigelowii, a mem­ber of the photosynthetic algal clade Haptophyta, as a predator of the abundant marine Cy­a­no­bac­te­ri­um Prochlorococcus. Our reader Benedetto pointed out instantly to three critical com­ments on this peer-reviewed paper in the PLoS Biology comments section, and, in one case, a re­ply by the corresponding author of the paper, Mikhail Zubkov (thanks, Benedetto, for posting in our Disqus comments section!). Because the three commenters Jon Zehr, Anne Thompson, and Daniel Vaulot (all experts in marine microbiology and familiar with the picoeu­kar­yo­tes and their bacterial "companions") raised seriously critical issues, I was left with two options: either retract my post and apologize for overzealously adhering to STC's mission (...emphasize the unusual and the unexpected phenomena), or let you, Read­ers, witness an ongoing scientific controversy among competitors (disclosure: Zehr, Thompson, and Vaulot have published together while, to the best of my knowledge, none of them together with Zubkov). As you read these lines you know that I chose the second option. Let me add here that both, retract­ions and debate, are normal processes in science, which only become nasty when plagiarism or fraud come into play. Neither of these is the case here, so I will proceed with outlining some of the criticisms of the Kamennaya et al. paper. 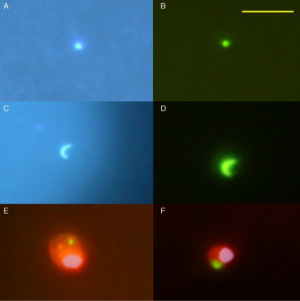 Figure 1. Epifluorescence micrographs of free-li­ving Prochlorococcus  (A,B) and SAR11 clade (C, D) cells from the equatorial region after DAPI staining (in blue), while the green colour shows the positive signal of the HRP labelled probes. Lower panel: epifluorescence images show the association between a Prymnesiophyceae and Prochlorococcus  cell (E), and Prym­ne­si­o­phy­ce­ae and SAR11 cell (F). Images E and F are an overlay of three pictures of the same cell obser­ved under UV excitation (showing the blue nu­cleus after DAPI staining), green light excitation (red cytoplasm after TSA-FISH with the PRYM02 probe) and blue light excitation (green cell after TSA-FISH with prokaryote probe). The scale bar is 5 μm and applies to all figures. Source. Front­page: Prochlorococcus  cell (thick arrow) held by and presumably separated from B. bigelowii JC142 during sorting and dehydration. Scale bar = 0.2 μm. SEM, scanning electron microscopy (question marks added to indicate that the identification of the cells as B. bigelowii  JC142 (larger cell) and Prochlorococcus  (smaller cell) is challenged). Modified from Source (Open Access PDF here)

Anne Thompson criticizes that Kamennaya et al. did not calibrate their cell-lysis, PCR, and sequencing procedure by an internal standard (for example, by 'by-sorting' bac­te­rial/picoeukaryote cells of known identity and con­cen­tra­tion) to ensure that the proportional distribution of DNA sequences reflects the relative abundance of the flow-sorted cells. Chloroplast-derived 16S rRNA se­quen­ces of Braarudosphaera bigelowii  JC142 were clearly do­minant with 22%. However, 16S rRNA se­quen­ces of "oth­er" picoeukaryotes were not negligible as they accounted for as much as 16%. As these "other" picoeukaryotes have sizes not significantly different from B. bigelowii and, ex­cept for the rarely observed flagellated ones, fairly simi­lar morphologies it is extremely difficult to visually dis­cri­minate them from B. bigelowii. Anne Thompson con­sid­ers it "a leap to conclu­de that relative abundance of se­quenced cell sorts accurately represents the relative abundance from microscopy and can be used to conclu­de the identify of single cells observed by microscopy". "Leap" in this context would translate to "not the most parsimonious explanation", which we scientists are ex­pec­ted to put forward. Moreover, an earlier study had obtained evidence that four major groups of pico­eu­kar­yotes (including Haptophytes, that is, relatives of B. bi­ge­lowii ), graze on Prochlorococcus  (Kamennaya et al. do not discuss a possible relevance of these findings to their own).

The "prey" may not be Prochlorococcus

Jon Zehr challenges the identification of the bacteria at­tach­ed to the larger Braarudosphaera-type cells as Pro­chlo­rococcus  based only on parallel sequencing of sor­t­ed cells. Since UCYN-A and Prochlorococcus  cells can hardly be distinguished by size and morphology, and the parallel sequencing lacked calibration (see above), the ob­tained ratio of appr. 1:1 of UCYN-A to Prochlorococcus  16S rRNA sequences is not sufficient to prove the identity of the attached cells as Prochlorococcus. This ratio might in fact be shifted in favor of Prochlorococcus  but it is not clear from the Material&Methods section of the Kamen­na­ya et al. paper whether they had included a correction for rRNA operon copy number (UCYN-A has 6 rRNA operons while most Prochlorococcus  strains, including MIT 9301 that is most similar to their sequences, have 3). In particular, the number of 16S rRNA reads for UCYN-A does not al­low to calculate to which extent the UCYN-A sequences were derived from endosymbionts of the Haptophyte or from attached cells. For this, and to unambiguously show that Prochlorococcus  was among the attached cells, FISH experiments on a representative sample would have been re­quired. This technique had already been successfully applied in an earlier, related study co-auth­ored by Mikhail Zubkov (Figure 1). Probably, applying the advanced technique of correlative micro­scopy (CLEM) would have led to the most reliable data but not all labs have access to the expen­si­ve equipment required to perform such experiments (Figure 2).

So, what are we left with?

We have, documented by the electron micrographs of Kamennaya et al., a bunch of picoeukar­yo­tes with highly similar cell sizes. Among them is a non-quantifiable majority of phototrophic, non-scaled Braarudosphaerae, and all picos are only a tad larger than the ball-shaped bacterial cells to which most of them (84%) appear firmly attached by their mouth-like cytostomes. Since it is not possible to reliably discriminate between Prochlorococcus  and UCYN-A cyanobacteria based on cell size and morphology, and since 16S rRNA sequences of both were found in the sample in equal relative amounts (26% vs. 25%, respectively), and since no data for in situ  determination of the identity of the attached bacteria (FISH) were presented by Kamennaya et al., the most parsimo­ni­ous explanation is that picoeukaryotes of 11 genera, mostly Braarudosphaerae, were found attach­ed to either Prochlorococcus  or, in roughly equal numbers, to UCYN-A cells. The ratio would shift in favor of attached Prochlorococcus  if the proportion of UCYN-A already residing as endosymbi­onts in their picoeukaryotic hosts were known, which isn't. Together, this allows to infer without restraints that, even when assuming a completely skewed distribution, there is at least initially no detectable morphological difference between grazing (=attachment of a ball-shaped Proclo­ro­coc­cus  to a picoeukaryote's cystome) and uptake of a potential endosymbiont (=attachment of a ball-shaped UCYN A cell to a Braarudosphaera's cystome). I'm tempted to re-phrase the original title of the post as "Ocean's Tiniest Predators".

A very interesting if somewhat inconsistent remark was made by Daniel Vaulot in his PLoS Biology comment to the Kamennaya et al. paper: "This work relies on a single sorted sample, which is my opinion raises some problem because Prochlorococcus, UCYN-A and Braarudospharaceae are ve­ry ubiquitous in the ocean, so this "pomacytosis" should be wide spread and found in other samp­les. Why has it not be seen before?" The fact that the findings of Kamennaya et al. were based on processing and analyzing a single sample is certainly a weak point, which the reviewers of the pa­per could have taken as argument for its rejection, which they didn't. However, that "pomacytosis" has so far not been observed by others that study the ubiquitous picoeukaryotes and their "asso­ci­a­ted" bacteria is not that surprising. Advances in the sciences are often – if not usually – kick­star­ted by someone literally seeing things for the first time that others failed to see even when in plain sight. The necessary scientific debate of such "Firsts" is what drives advances in knowledge. 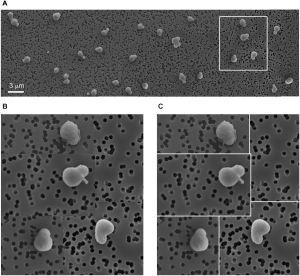 (Click to enlarge )
Figure 3. A Original Fig. 2A from Kamennaya et al. (2018) (partial) and caption: "(A) The collage depicting that the sorted smallest picoeukar­yo­tic algae were dominated by a single morpho­lo­gical type of cells molecularly identified as B. bi­ge­lowii  JC142. Note that the majority of the B. bi­gelowii  JC142 cells are associated with prey cells molecularly identified as Prochlorococcus". (the section shown magnified in B and C is indi­cated by the added frame). B magnified section of A. C frames indicate where snippets of elec­tron micrographs were "stitched together" to create the collage in A. All Modifications by the author.

I did not include in my original post one particular figure that Kamennaya et al. presented in their paper for a rea­son (Figure 3 A). Not that this panel of electron-micro­sco­pic "portraits" of picoeukaryotes with their attached bac­te­ria isn't top-notch scanning electron microscopy, and esthetically pleasing, even outright beautiful, it is! But I skipped it – in favor of other, no less stunning pictures – because it too easily evokes the impression that these pairs of "pico-hugging-bug" were abundant in this clip­ping from a larger electron micrograph, at least when not looked at carefully. They were at best moderately abun­dant, as can be seen on one of their original electron mi­crographs (Source). As Kamennaya et al. explicitly write in the caption to their Figure 2A, this is a collage, and I count 15 separate pictures stitched together (detail in Figure 3 B). This is not a case of unethical behavior or scientific fraud, to be clear! But personally, as read­er and as author, I much prefer pictures in scientific pub­lications that refrain from "nudging" viewers/readers into seeing something the authors want to emphasize. I'd have had no problem with illustrating my original post with a ver­sion of this panel of "picos-hugging-bugs" as depicted in Figure 3 C, that is, with frames indicating the individual snippets. In addition, as creator of such a col­lage I would have taken care to not cut one of the picos almost in half, they deserve better (can you spot it?).