This post features electrons, which are among the smallest things possible. There are, of course, even much smaller things than electrons but this blog keeps clear of the quantum realm, most of the time. Yet to make up for the electrons' teensyness – if they could keep still some 4 × 1021 would fit into the period at the end of this sentence – they are featured here in two roles. When acce­le­ra­ted at 200 kV in a transmission electron microscope (TEM) the wavelength of electrons comes close to 2.5 picometers and allows for the visualization of macromolecular and subcellular structures in the sub‑nanometer range. Such structures cannot be resolved by conventional light microscopy that is constrained to resolving structures in the ~200 nm range (see here in STC for more). So, by electron microscopy, electrons can help elucidate the structure of outer membrane extensions (OME) that some bacterial cells use to shuttle… electrons, you guessed it. Spoiler: there's no way to see electrons in persona, but at least some in fairy lights, almost (Figure 1). 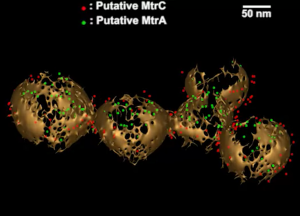 Figure 1. 3D isosurface view of the outer mem­bra­ne extension (OME) in Fig. 2 A with all of the interior and exterior densities (putative MtrA + MtrC, respectively) represented as model points in green and red, respectively (Scale bar: 50 nm). Screenshot from Movie S12, at min 1:32. Source

When bacterial cells need energy they usually employ two biochemical pathways, glycolysis and respiration that read, in short and neglecting exact stoichiometry: C6H6O6 + O2 → CO2 + H2O. Well hidden in this chemical equation is what actually drives energy conversion: 4 H+ + 4 e– + O2 → 2 H2O. And the key term here is: 4 H+ + 4 e–, that is, the enzymatic separation of hydrogen ions (H+) from elec­trons (e–). The hydrogen ions are pumped out of the cyto­plasm to build up an electrochemical gradient across the inner membrane that powers the cell's dynamo, ATP syn­thase. While replenishing their ATP pool the cells have to dispose of the electrons, which do not simply "diffuse away". Again without giving the exact stoichiometries, these electrons are funneled through several inner-mem­brane complexes towards complex IV (cytochrome c oxi­dase). This enzyme catalyzes their reaction with O2 to yield first [O2]· radicals, and as endproduct H2O. Thus oxygen (O2) serves as electron acceptor and allows bacteria breathe with ease. Anaerobe bacteria can "breathe" by using other soluble elec­tron acceptors, as for example nitrate (NO3) or sulfate (SO4). This, of course, requires different enzymes for the last step. Trickier is the use of insoluble electron acceptors, for examples metal oxides such as manganese oxide or ferric iron (Fe3+)-containing compounds. A number of bacteria from different phyla have turned master electricians and virtually "plug cables into a socket" of such metals, that is, cellular extensions termed 'microbial nanowires', which were introduced to STC back in 2008. 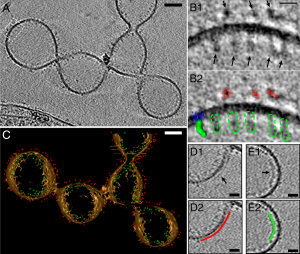 (Click to enlarge ) Figure 2. Positions and pack­ing of decaheme cytochromes (deca=10) along the outer membrane (OM) extension length in S. oneidensis. A electron cryotomography (ECT) image of an unfixed OM extension showing den­si­ties on both the interior and exterior of the OM corresponding to putative MtrA and MtrC cyto­chromes, respectively (Scale bar: 50 nm). B1 en­larged view of boxed area from A. B2 com­pa­ri­son of EM densities in B1 with the crystal struc­ture of MtrC, low-resolution SAXS model of MtrA, and the MtrB homolog LptD, highlighting the si­milarity in overall shape and size of these struc­tures to the observed EM densities. Red, MtrC crystal structure; green, surface view of MtrA SA­XS model; blue, LptD crystal structure; dotted green, outline of putative MtrA densities on the EM map (Scale bar: 10 nm). C a 3D isosurface view of the OM extension in A with all of the in­terior and exterior densities (putative MtrA and MtrC, respectively) represented as model points in green and red, respectively (Scale bar: 50 nm) (see Movie S12) D–E representative regions from the OM extension in A demonstrating dif­fe­rences in packing density of MtrA and MtrC. Continuous exterior (D1) and interior (E1) den­si­ties that may be related to tightly packed MtrC and MtrA, respectively. D2 and E2 are dupli­ca­tes of D1, E1, respectively, with model points or lines highlighting the interior (green) and ex­te­ri­or (red) densities (Scale bars: 20 nm). Source

Among the first bacteria that were studied for their abi­li­ty to "breathe metal" and "grow on electrodes" was She­wa­nella oneidensis MR-1. An earlier study had already conclusively shown, by combining conductivity measure­ments and atomic force microscopy (AFM), that this ca­pa­city depends on cellular appendages, the notorious 'nano­wires'. Now a recent study by the El-Naggar and Jensen labs revealed more structural details of these 'appen­da­ges', and identified them as outer membrane extensions (OMEs) (Figure 1). Their method included the following steps, briefly: 1. grow S. oneidensis on a metal grid under anaerobic conditions to promote the production of OMEs and in the presence of a (non-toxic) fluorescent membra­ne stain, 2. fix the cells and their OMEs at various time points by treatment with glutaraldehyde, 3. plunge-freez­ing of the grids to prevent the formation of ice crystals that would distort or destroy subcellular structures, 4. mo­nitor the status of cell growth and OME formation by fluorescence light microscopy (fLM), 5. virtually si­mul­ta­ne­ous scan the samples by electron cryotomography (ECT) at angles ranging from –60° to 60° in 1° increments (thus creating minute tomographic 'slices'), 6. 3D image the tomographic slices. Here's a guide for you: Figure 2 A shows a tomographic slice (ECT), 2 B the same level after 3D imaging, and Figure 1 the complete 3D image from the same viewpoint (you can follow this reconstruction in their Movie S12). By combining fLM (steps 4) and ECT (step 5) with a technique dubbed correlative light-elec­tron microscopy (CLEM) they were able to overlay pictures taken at different magnifications and attribute particular OMEs to "their" cells (Figure 3). In the majority of their pictures, the OMEs appear as chains of outer membrane vesicles (OMVs) or, more colloquial, waist-y membrane blebs that are morphologically readily distinguished from flagella, pili, or extracellular polymeric substances, and can exceed the producing cells in length.

But how are these 'fairy lights' switched-on? Which constituents of the OMEs are responsible for electron transport? S. oneidensis possesses a number of periplasmic and OM-bound multiheme proteins of the cytochrome c family in addition to cytochromes that reside in the inner membrane (IM) that are responsible for electron funneling during respiration (the hemes are the prosthetic groups of multiheme cytochrome c proteins that transport the electrons). Of these "non-IM" cyto­chromes, MtrA contacts the OM from the periplasmic side of the vesicles, and MtrC sits on the out­side (see here for a diagram). Subramanian et al. observed in their electron micrographs suspi­cious smaller patches of "knobs" (Figure 2 B,D,E) that corresponded in size to that of the (known) crystal structures of MtrA and MtrC, respectively. They deduced from the observation that both ty­pes of "knobs" were by >50% reduced in selected OME vesicles produced by a Δmtr mutant strain that these two proteins constitute part of what makes the OMEs conductive for electrons. Like all membrane proteins devoid of a cytoplasmic "anchor" MtrA and MtrC have no fixed positions in the membrane and can literally "float" sideways, and, as they do not cover the membranes comple­te­ly but occur in patches, electron transport is likely to include electron movement by inter-mole­cu­lar "hopping" in addition to intra-molecular "funneling" through stacked hemes.

Cellular 'appendages' like the outer membrane exten­si­ons (OMEs) of Shewanella are really small and rather fragile, especially under the harsh conditions to which they are exposed during the electron microscopy proce­dure. Therefore, Subramanian et al. took care to not pro­duce artifacts (something that haunts all electron micro­sco­pists). They monitored the number and appearance of OMEs in un-fixed vs. fixed samples and found that al­though the number of intact OMEs was very low in un-fixed samples, they looked indistinguishable from those in glutaraldehyde-fixed samples. Also, the constrictions along the OMEs that gives them the appearance of chains of waist-y membrane blebs were observed under both conditions, including the electron-dense material (of yet unknown composition) in the periplasm of the blebs (Fi­gure 3). An alluring but unproven assumption is that this internal 'belt' is composed of re‑purposed components of the cellular machinery normally constricting cells during cell division. The researchers took time­lapse series of individual cells to follow the protrusion and retraction of individual OMEs and found them to be highly dynamic: protrusion and retraction occurred within an hour, approximately, and included budding and branching, and positioning and dissolution of the belt-like constrictions. In this respect, Shewannella's nanowires resemble neurons with their extending axons more than the copper nanowires of the hardware store.