Let's risk an exaggeration. Stanley Falkow, whose recent death we mourn, could be called the mo­dern embodiment of Robert Koch.  The risk here seems reasonable because the parallels are re­mark­able. Like Koch, Falkow started a whole school of research, this one focused on molecular bac­terial pathogenesis. His alumni, many who are now luminaries in their own right, are number­ed in the hundreds. Of course, some of the recent stars of the field came from elsewhere but that was true in the late 1800's as well. 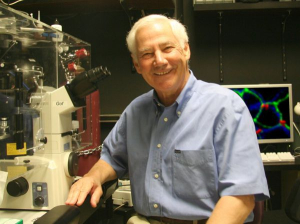 The Koch analogy is strengthened by Falkow's pro­cla­ma­tion of the "Molecular Koch's Postulates", wherein he laid down the law for how to prove the nature of bacterial vi­rulence factors using genetic tools. Just like Koch's postu­la­tes, Falkow's needed later adjustments, but at the time of their inception, they played a crucial role in the de­ve­lop­ment of modern microbial pathogenicity.

Falkow's origins also point to a connection with the 19th century, as he started out doing clinical lab work, a do­mi­nant concern of microbiology in Koch's days. He only la­ter entered into the mainstream of modern microbiology, starting out with key experiments on the nature of plasmids. In time, his lab turned to using bac­te­ria mutants to establish the nature of virulence factors The first one was Invasin, a protein re­qui­red for the entry of Yersinia pseudotuberculosis into host cells, which was discovered by his post­doc Ralph Isberg. He recently wrote a heartwarming and personal account of Falkow's role in the discovery.

All who knew Falkow, some of us included, were enchanted in his enthusiasm, his wit (sometimes expressed in, let's say, dubious words), and his concern for others. To know him was to admire him.

Falkow wrote two pieces for this blog, both notable for his willingness to share early experiences, and to do it in his unique ‘voice.' One is concerned his early contribution to the modern field of fecal transplants, the other on his qualms when starting out teaching large classes.

He leaves a large void.