« No hiding among the trees: forensic phylogenetics | Main | Retrospective, June 2018 »

On Bacteria Getting Fat

In bacteria and archaea, lipids seem to be found mainly in the cell membrane. Can you think of possible functions for lipids elsewhere in bacterial and/or archaeal cells? On first inspection, these two opening sentences have the makings of an STC Talmudic Question. Except for the fact that intracellular fat accumulation or, more precisely, cytoplasmic lipidic inclusions were already described in bacteria during the first half of last century. Witness as example Kenneth Burdon’s nice hand drawn renditions from 1946 of Sudan black B-stained cells. So, call this the Talmudic Question that wasn't. But I do find the topic of intracellular lipids quite fascinating and very much worthy of a brief exploration here in STC. While much has been learned about these lipids in the many decades since they were first discovered they remain somewhat enigmatic and not every microbe enthusiast is aware of their existence. 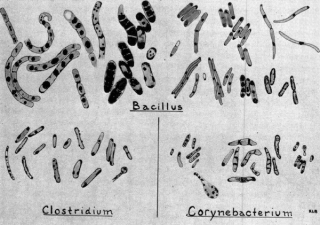 There are three general types of intracellular lipidic accumulations that have been described in archaea and/or bacteria: polyhydroxyalkanoates, wax esters, and triacylglycerides. By far the most widespread of these are the polyhydroxyalkanoates, found in both bacteria and archaea (though apparently the Enterobacteriaceae, members of the genus Lactobacillus and the methanogens lack the capacity to produce these polymers). Like several other polymers, for example glycogen, polyhydroxyalkanoates accumulate when cells become starved of a non-carbon nutrient while still in the presence of an excess of a source of carbon. Despite being lipidic in nature, one is hard pressed to think of polyhydroxyalkanoates as fat. Rather, they are more like plastics. In fact, these polymers gained a lot of notoriety as a potential source of biodegradable plastics. Likewise, wax esters, which are not found in archaea, are more like beeswax and not fat.

The third intracellular lipidic accumulation, that of triacylglycerides, occurs through a widely conserved process that appears to be quite similar in bacteria and eukaryotic cells – the formation of lipid droplets. Yes, bacteria "get fat" in the same sense that adipocytes "get fat," through the formation of these intracellular organelles that are bounded by a phospholipid monolayer and are full of triacylglycerides. Among the bacteria, lipid droplet formation has been observed primarily in some members of the phylum Actinobacteria. In some cases, such as in cells of Rhodococcus opacus, these fats can accumulate to become up to 70% of the total cellular dry weight. 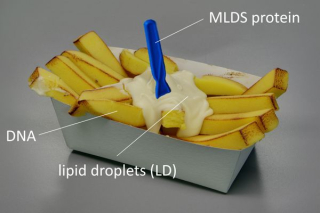 As might be expected, triacylglyceride accumulation results when cells are starved for a non-carbon essential nutrient – usually nitrogen – while still in the presence of an excess supply of a carbon source. Thus, the function of bacterial lipid droplets was assumed to be simply to store a carbon and energy source. This was also the predominant view for the function of lipid droplets in eukaryotes for many decades. But slowly the study of lipid droplets in eukaryotes revealed additional roles for these organelles in intracellular molecular trafficking and signaling. These additional functions are mediated in part by proteins that specifically localize to the phospholipid monolayer enclosing the droplets. Quite interestingly, proteomic analyses of lipid droplets isolated from Rhodococcus jostii led to the discovery of a droplet-associated protein, MLDS. Deletion of the gene encoding MLDS led to significant alterations in the size and content of the droplets. Significantly, the discoverers of MLDS noted that the protein, aside from its lipophillic domain, contained a putative DNA binding domain. In a recent study they were able to demonstrate, both in vivo and in vitro, that MLDS mediates the association of lipid droplets with DNA. Loosely, you can consider MLDS as the fork that sticks through and helps hold together the mayonnaise (lipid droplets) and the fries (DNA). Interestingly, mutants lacking MLDS showed increased cell lysis under nitrogen starvation and a slight increase in DNA damage upon exposure to UV light. This is very early in the game, but it does appear that fat accumulation by bacteria does not simply play a role in storing a carbon and energy source, it seems that fat accumulation will also have a function in DNA protection and stress survival. Who would have thought so! There is much still to learn about the hows and whys of bacteria "getting fat."