The Microbial Ecology of Chocolate

Being retired, I no longer get the opportunity to brainstorm with post-doctoral candidates hoping to join the lab about possible projects to pursue (an activity that I greatly enjoyed for many years). But ideas of interesting research areas in the microbial sciences still arise often in my mind. So I will, on occasion, use these short format Thurday posts in STC to put some of these ideas "out there" in the hopes that there might be some takers willing to explore them. Call it the dessert of my career. And dessert is exactly what I want to talk about today because, for many, there is no better dessert than chocolate. 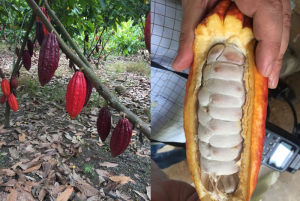 Chocolate (from the Nahuatl word xocolatl) is now almost universally consumed as dessert but it was certainly not always the case. Edible preparations from the seeds of the beautiful cacao tree (Theobroma cacao) pods were consumed in Mesoamerica without sugar for several thousand years before the conquistadores introduced this "food of the gods" to Europe. But always, microbial activity has been the sine qua non for converting the bitter inedible seeds into chocolate. While much is now known about the involvement of microbes in the making of chocolate (for a wonderful time-tested review see here), this remains a relatively underinvestigated area of microbiology (though there are a few labs working on the subject, the articles here, here, here and here make this evident). To me, this represents a great opportunity for research. 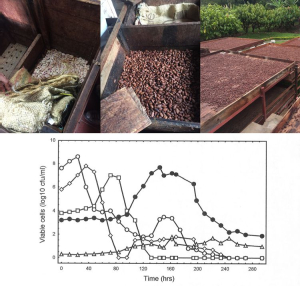 The role of microbes in chocolate production starts soon after harvest, when the pods are cracked open. The husks are discarded and the mucilage-covered seeds placed in containers and kept there for about a week, with regular turning for aeration. Afterwards the seeds are allowed to dry in the sun for another week, greatly reducing their moisture content and consequently put­ting the brakes on microbial activity. The ecological suc­cession that occurs during these two weeks during which mucilaginous pulp is degraded makes cacao fer­menta­tion, in my opinion, an ideal system for experimen­tal ecology that has scarsely been exploited. There is a very orderly coming and going of ethanol-producing fungi, followed by peaks of lactic acid bac­teria, acetic acid bac­teria, spore-formers and filamentous fungi. This suc­cess­ion has clear biological outcomes: the ethanol, lactic acid and acetic acid that permeate the seeds are essen­tial for flavor and aroma development while the spore-formers and filamentous fungi generate off fla­vors. While partly understood, this system is primed for many more in-depth studies. What are the exact roles of the micro­bial strains? Do unique flavors and aromas vary as a con­se­quence of specific microbial genes? How do the microbial species present interact with each to other? There is such a wonderful potential for inte­grating ecology, genomics, genetics and chemistry. There even is a well-defined synthetic five-strain community that mimics the results of natural fermentation!

In addition, I think these times are ripe for diving into the studies of this ecosystem. Up until the last couple of decades, processing of cacao beans did not pay much attention to the development of exotic aromas and flavors. But in recent years there has been a growing interest in producing (and, of course, consuming) specialty "single origin" chocolates. As new varieties of Theobroma cacao are developed by plant breeders, chocolate producers are beginning to recognize that the development of unique taste characteristics depend on the microbial communities present. Yet, the molecular details underlying the ecology of cacao bean maturation remain largely a mystery waiting to be explored. Any takers? If so, don't hesitate to ask, I'll be more than happy to put you in contact with cacao growers more than happy to have microbial scientists as collaborators.