In our age of metagenomics, the uncultivable microbe is no longer a ghost-like entity whose exist­ence is to be surmised. Instead, 'uncultivables' now occupy prominent daises on a microbiome stage. Fine and good, but cultivation is still a mainstay in microbiological work and growing a some­one in the lab is still highly desirable. In the case of environmental microbes, this can often be ac­complished by combin­ing the understanding of the chemical and physical properties of their na­tu­ral habitat with a lot of patien­ce. Most bacteria and archaea grow at ludicrously slow rates in the environment, so growth in the lab must be expected to require long incubation periods. Here is an example of success, the cultivation of the ubiquitous marine bacterium Pelagibacter ubique.

But matters are different when it comes to pathogens. The majority can in fact be cultivated – ask any clinical microbiologist – and the list of uncultivable ones is relatively short (for a review, see here). The list includes notable human pathogens such as the leprosy bacillus, Rickettsiae, Chlamy­diae, and others. But the question arises, is the list getting shorter? Some pathogenic bacteria face a problem akin to that of viruses, lacking essential enzymes for biosynthesis and energy metabo­lism. Consider the leprosy bacillus. It has a reduced genome of some 1,600 open reading frames (less than half those of the tubercle bacilli). A detailed analysis concludes that "it is lesions in the metabolism of carbon sour­ces that best explain why M. leprae cannot be cultured axenically. To­gether with a complete, but very limited and essentially single route for electron transport, M. le­prae appears to have become confined to a specialised niche in the host." 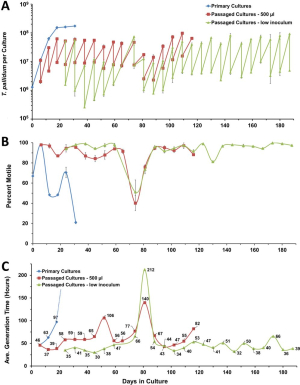 Figure 1. Long-term cultivation of T. pallidum sub­sp. pallidum Nichols in a tissue culture sys­tem (experiment 1). A In this “sawtooth” plot, the number of T. pallidum organisms per cul­tu­re upon harvest and the number inoculated in the next subculture are shown for each time point. B Percent motility provides a measure of viability. C Average (Ave.) generation time, re­pre­senting the time in hours divided by log2 (fold increase) for each time point. Source. Frontpage: Treponema pallidum (Nichols strain). 11,000×. Source

In two other instances, brainy and meticulous genome-ga­zing has led to the concocting of culture media that support the growth of two previously recalcitrant organ­isms, both intracellular in life habit. They are the agents of Whipple’s disease, Tropheryma whipplei (see here), and of Q fever, Coxiella burnetii (see here). We ce­le­bra­ted the latter achievement in these pages (Coxiella Es­capes from Cell).

The current issue of mBio, pretty much my favo­rite jour­nal, has two germane stories, one straightforward, the other contentious. The former is a paper by Edmond­son, Hu, and Norris announcing the long-term in vitro culture of the syphi­lis spirochete Treponema pallidum (see front­page). This would be even bigger news if they had achie­ved axenic growth of this organism, something that has escaped untold investigators for some 100 years. What they did accomplish, however, is quite significant: they grew the organism for a long time in the test tube in co-culture with rabbit epithelial cells. By messing around with the composition of the me­di­um and its gas phase, they achieved what had eluded pre­vious investigators, the exponential growth of the spi­ro­che­tes for over six months. The organisms remained motile during this time and retained their infectivity when injected into the skin of rabbits.

The other story in this issue starts with a letter by Liu, Fahle, and Kovacs, who say they could not repeat the in vitro cultivation of the pathogenic fungus Pneumocys­tis jirovecii of AIDS fame, accor­ding to the method described by Schildgen et al. These investigators respond to this letter and don’t agree with it. We are again talking about a co-culture system, between this fungus and an airway epithelium cell line. Liu and colleagues say that they followed the published procedure ex­actly, with no growth detectable by qPCR. The response by the Schildgens points out that their system does not always work, for reasons to be determined when they obtain further funding. They further suggest that the patient from whom the material for cultivation was obtained may have been on antibiotics, which could have carried over in the inoculum (Pneumocystis being a fungus, we are talking about drugs like trimethoprim/sulfamethoxazole, to which it is sensitive). My guess is that the topic of being able to grow Pneumocystis in culture is of sufficient importance that other labs will jump in and eventually sort it all out. And cultivating the unculturable will con­tinue to be a forefront issue in microbiology.