In a post two month ago, I referred to 'defensive symbioses'. In a nutshell: one or more symbiotic bacteria produce a cocktail of antibiotics that provide protection of a eukaryotic host against an ar­ray of opportunistic bacterial and fungal pathogens. I introduced the term not in contrast but in addition to the better known 'nutritional symbioses', for example, the aphid–Buchnera symbiosis. I had also mentioned that 19+ of such 'defensive symbioses' have been studied to date and are rea­sonably well understood. But can you imagine how such 'defensive symbioses' evolved in the first place? Laura Flórez and her colleagues might have found a clue in their recent study of the sym­bio­sis of Burkholderia gladioli  with the beetle Lagria villosa. As it turns out, this is a convoluted story of "friend & foe" rather than of "friend or foe" as the saying goes. 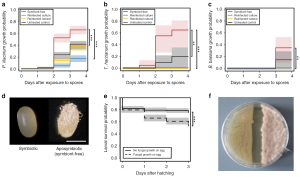 (Click to enlarge ) Figure 1. B. gladioli  symbionts protect L. villosa  eggs from fungal infestation. In the absence of the symbionts on L. villosa eggs, there is a higher probability of three fungi to grow: a P. lilacinum, b T. harzianum, and c B. bassiana (all three from the Ascomycota divi­sion of Fungi); "reinfection" refers to application of cultured B. gladioli Lv-StA cells ("culture") or symbiont mixes isolated from eggs ("natural") to washed eggs. d Picture of a representative symbiotic and aposymbiotic egg after 4 days of exposure to P. lilacinum  spores. Scale bar, 0.5 mm. e Growth of P. lilacinum  on the egg has a negative effect on the survival of the larvae du­ring the first days after hatching. f In vitro co-cultivation of B. gladioli Lv-StA (left) and P. lila­ci­num  (right) on potato dextrose agar showing inhibitory activity of B. gladioli Lv-StA. Source (Open Access PDF here). Frontpage: The B. gla­dioli  symbionts produce metabolites that are active against Purpureocillium lilacinum, a na­tu­ral fungal antagonist of the beetle L. villosa. A Sinapigladioside produced by L. villosa StA exhi­bits antifungal activity against P. lilacinum. Wells 1 – 3 correspond to sinapigladioside at 1, 0.5 and 0.25 mg/ml, respectively, well 4 to the negative control (solvent=acetonitrile) and well 5 to the positive control (Ketoconazol). B A ca­ryoynencin-containing fraction inhibits the growth of P. lilacinum  in vitro  (upper picture). Negative control (solvent=methanol) (lower picture). From Supplementary Information of Source (Open Access PDF here)

Females of bicho capixaba, the invasive South American soybean pest with the scientific name Lagria villosa, a beetle species of the Lagriinae family within the order Coleoptera, carry bacterial symbionts within two pairs of accessory glands associated with their reproductive sys­tem. (An aside, just to keep the record straight: also soy­bean (Glycine max), which is cultivated in industrial-scale monocultures in South America, particularly in Argentina and in Brazil at the expense of the Amazon rainforest, is an invasive species, of course, as it originates from South East Asia.) The beetle's symbionts are transmitted verti­cally on the egg surface and some enter the eggs shortly before hatching. They then colonize invaginations of the cuticle in the dorsal part of the embryo that later close to form three internal compartments. Flórez et al. found by sequencing field‑collected females and eggs, and larvae raised in their lab that ~70% of the obtained 16S rRNA sequences clustered with Burkholderia gladioli (we had mentioned the betaproteobacterial genus Burkholderia in this blog here, here, and, most recently, here). B. gla­di­oli is a well-known plant pathogen and, according to Fló­rez et al., at least three highly similar B. gladioli strains co-infect L. villosa (Brazil) and its sister species L. hirta (Europe), L. nigricollis, L. rufipennis, L. okinawana (in Ja­pan, all three), plus Ecnolagria sp. (Australia). It appears that the coexistence of multiple symbiotic B. gladioli strains within individual beetles is a common feature in the Lagriinae.

The authors found that one strain, B. gladioli Lv-StA, is capable of growing in the lab independent of its host. By chromatography and mass-spectrometry of culture su­per­natants (HPLC‑MS), they identified four bioactive com­pounds: toxoflavin, caryoynencin and two novel ones, the macrolide lagriene (not to be confused with lagrein, an en­ticing pinot noir variety from South Tyrol, Italy) and the isothiocyanate sinapigladioside (for struc­tural formulas see here; Source). Plate assays – you can see examples of them on the frontpage, and in Figure 1f – revealed that toxoflavin and lagriene are active against two common soil bac­te­ria, Brevibacillus laterosporus and Bacillus thuringiensis, respectively, while caryoynencin and si­napigladioside display antifungal activities against Purpureocillium lilacinum, an egg entomo­pa­­tho­gen (=pathogen of insects) and a natural enemy of L. villosa adults and larvae. 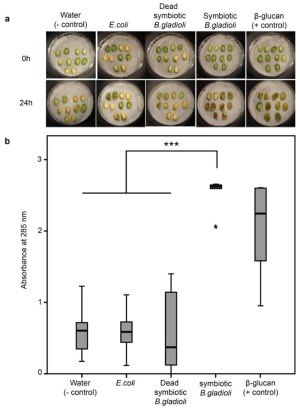 Figure 2. Burkholderia symbionts of the beetle L. villosa elicit a defense response in soybean cotyledons. Cotyledon assay determining gly­ce­ollin production (=infection marker) by soybean upon inoculation with B. gladioli symbionts iso­la­ted from L. villosa, in comparison with nega­ti­ve (water, E. coli and dead B. gladioli) and posi­ti­ve controls (β-glucan, a known elicitor of defen­se mechanism in plants). a Red coloration after 24 h is indicative of glyceollin production as ob­served in B. gladioli and β-glucan treatments; b UV-spectrophotometric measurements at 285 nm support significant differences in glyceollin amounts in the different treatments (Kruskall Wallis test with Dunn post-hoc test, n = 8 coty­le­dons per group, ***p < 0.001). The center value of the boxplots represents the median, the whis­kers denote minimum and maximum values, and the star represents an extreme outlier (mo­re than 3 interquartile ranges from nearest box edge). From Supplementary Information of Source (Open access PDF here)

To mimic the natural setting in the lab, Flórez et al. pla­ced L. villosa eggs on a sterile, nutrient-free substrate soaked with P. lilacinum spores (more precisely: in 96-well microtiter plates, the individual wells 'inoculated' with one egg and 50 spores; 120 eggs each from six different egg clutches, distributed in sets of 30 eggs for each of four treatments: surface-sterilized, reinfected with eggs-wash, reinfected with B. gladioli Lv-StA culture, and untreated). They then monitored the hatching of larvae and fungal growth over 4 days and found that surface-sterilized eggs experienced fungal growth sig­ni­fi­cant­ly more often and at higher levels than control eggs (Figure 1a). Importantly, reinfection of surface-sterilized eggs with Burkholderia symbionts from egg washes or cultured B. gladioli Lv-StA significantly reduced fungal infestation (this control confirmed that the absence of the symbionts rather than surface-sterilization was re­sponsible for increased susceptibility to fungal growth). The protective effect of the symbionts was further cor­roborated by the significantly higher probability of fungal growth on untreated eggs from aposymbiotic (=symbiont-free) as compared to symbiotic mothers (Figure 1d). They also found a negative effect of P. lilacinum on the survival of the larvae during the first days after hatching (Figure 1e). In addition to reducing the growth of P. lilacinum, B. gladioli Lv-StA also inhibited the growth of the fast-grow­ing soil fungus Trichoderma harzianum and the ento­mo­pathogen Beauveria bassiana, on L. villosa eggs. The lat­ter results point to a more general antifungal protection of the L. villosa eggs by the symbionts (Figure 1b+c).

That's all well for the beetles, but does the Burkholderia gladioli symbiont profit from protecting Lagria villosa eggs from fungal infections? To address this question, Flórez et al. tested the efficiency with which the bacteria are transferred from the beetles to soybean plants. They placed symbiont-carrying (female) beetles onto individual soybean leaves for 3 days and removed them thereafter. Fun aspect of this experiment: since beetles aren't notorious for a sessile lifestyle but rather prefer to roam about they confined them in tiny cages that covered the 'target' leaves. Once the beetles were removed, the plants were grown for another 12 days before harvesting the leaves. They then found, by quantitative PCR (RT-qPCR) with Burkholderia-specific primers, a dif­fe­rence by >2 orders of magnitude of Burkholderia sequences on "beetle-infested" leaves versus control leaves. Apparently, the Burkholderia symbionts sort-of "leak" from the intestinal reservoirs of their (female) host beetles quite efficiently. The authors had, of course, checked beforehand that Burkholderia gladioli elicits a defense response in soybean cotyledons (Figure 2) and can in­fect the plants systemically (see here; Source). A full-blown B. gladioli infection leads to a reduction of seed numbers produced per soybean plant. That's what you would expect from a plant patho­gen! Because plant-pathogenic bacteria like B. gladioli are always in a fierce (nutritional) compe­ti­tion with fellow bacteria and a plethora of "decomposer" fungi, it's no big surprise that they evol­ved defense mechanisms based on antibiotics. So, why not share these antibiotics with your horse ... um, host that gives you a ride to the next plant? Or, as the authors say:"Our findings provide evidence for a transition from a plant pathogenic to an insect mutualistic lifestyle, and describe an ecological setting in which it likely occurred. They also support that such shifts are not necessarily unidirectional, but can be dynamic on both ecological and evolutionary timescales."