How Much Does Biology Weigh?

In nature's infinite book of secrecy, a little I can read.
Shakespeare, Anthony and Cleopatra (Click to enlarge ) Figure 1. Graphical re­pre­sen­ta­tion of the glo­bal biomass distribution by ta­xa. A Abso­lute biomasses of different taxa are repre­sen­ted using a Voronoi diagram, with the area of each cell being proportional to that taxa global bio­mass (the specific shape of each poly­gon car­ries no meaning). This type of vi­su­a­li­za­tion is simi­lar to pie charts but has a much high­er dynamic range. Values are based on the esti­mates pre­sented in Table 1 and detailed in the SI Ap­pendix. A visual depiction without com­po­nents with very slow metabolic activity, such as plant stems and tree trunks, is shown in SI Ap­pendix, Fig. S1. B Absolute biomass of different animal taxa. Related groups such as ver­te­bra­tes are located next to each other. We estimate that the contribution of reptiles and amphi­bi­ans to the total animal bio­mass is negligible, as we discuss in the SI Ap­pendix. Visualization per­formed using the online tool bionic-vis. C Bio­mass distributions across different en­vi­ron­ments and trophic modes. Abso­lute biomass is represented using a Voronoi dia­gram, with the area of each cell being proportional to the glo­bal biomass at each environment. Values are based on SI Appendix, Table S23. We define deep subsurface as the marine subseafloor se­diment and the oceanic crust, as well as the ter­restrial substratum deeper than 8 m, excluding soil. D Fraction of the biomass of each kingdom concentrated in the terrestrial, marine, or deep subsurface environment. For fungi and protists, we did not estimate the biomass present in the deep subsurface due to data scarcity. E Dis­tri­bu­tion of biomass between producers (autotrophs, mostly photosynthetic) and consumers (hetero­trophs without deep subsurface) in the ter­res­tri­al and marine environments. The size of the bars corresponds to the quantity of biomass of each trophic mode. Numbers are in gigatons of carbon. Source. Frontpage: Earth from space. Source

The very last thing that happened to me at the June 2018 ASM's Atlanta meeting (Microbe 2018) was a particularly rewarding coincidence. As I was ready to step on an esca­lator at the convention center, ready to go to the airport, a young man stopped me and asked to talk to me. It was Yinon BarOn, a student at Israel's Weizmann Institute and one of the three authors of a very recently published ar­ticle that presents a comprehensive estimate of the weight of the whole biosphere − all the living creatures on Earth. He was pleased to hear that I indented to write this up for STC, which made for a gratifying if brief con­ver­sa­tion.

The authors of this seminal work based their biomass cen­sus of all life on Earth on an analysis of hundreds of re­cent studies and on generating estimates for taxa for which there was no previous relevant data. There is much in this paper for non-microbiologists and microbiologists to ponder upon. First, for the latter, the not so good news. By these estimates in this paper, bacteria do not comprise half the biosphere by weight, as per the cherished 1998 Whitman et al. estimate, but are only about 13% of the total. Plants far outweigh eveything else, comprising so­me 82% of the total. So much for bragging rights… Still, the good news is that although bacteria are in second place by weight, they outclass all the other eukaryotes (which are a puny 3% of the total). The weight of all ar­chaea, by the way (why are archaea so often “by the way'd"?) is said to be about one tenth that of the bac­te­ria.

It bears saying that the earlier estimate was pretty much on the mark with regard to the number and weight of bac­terial cells but underestimated the cumulative weight of plants. The present authors say that their plant cal­cu­la­tions are based on quite robust data. (I guess this may be due in part to the fact that most plants don't move much from place to place.)

There is a formidable amount of work here. It embraces the measurement of the weight (in terms of carbon) of all prokaryotes, eukaryotes, and viruses, in other words, all the entities of Biology. This census purports that most of the biosphere's members are found on land, although microbes dominate in the oceans, where about 70% of the biomass consist of bacteria and protists. The deep subsurface of the oceans, about 15% of the biosphere, is mainly bacterial and archaeal. Keep in mind that this biome is metabolically not very active, with generation times of months or possibly thousands of years − not what one usually ex­pects of prokaryotic cells. 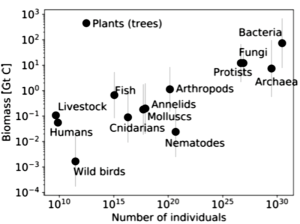 Figure 2. The relation between abundance and biomass of different taxa. The total number of individuals in each taxon is plotted against the total biomass of the taxon. The error bars re­flect our uncertainty projection of the biomass estimate. Source

The paper is relatively short and highly readable, the real work to be found in no less than 112 pages of Supporting Information. Here are 23 tables of data that provide the methodology used to estimate the global biomass of each and estimates of the uncertainties involved in the calculations.

The authors point out that more needs to be done. They say: "...for other groups, such as terrestrial arthropods and protists, quantitative sampling of biomass is limited by technical constraints, and comprehensive data are thus lacking." Additionally, they state: "...there are entire environments for which our knowledge is very limited, namely, the deep subsurface environments such as deep aquifers and the ocean's crust, which might hold the world largest aquifer. Studies in these environments are scarce, meaning that our estimates have particularly high uncertainty ranges and unknown systematic biases. Main gaps in our knowledge of these environments pertain to the distribution of biomass between the aquifer fluids and the surrounding rocks and the distribution of biomass between different microbial taxa, such as bac­te­ria, archaea, protists, and fungi." 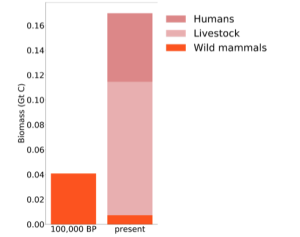 Opportunities for filling gaps and solidifying conclusions abound. Thus, the authors point out that: "Identifying gaps in our knowledge could indicate areas for which further scientific exploration could have the biggest im­pact on our understanding of the biosphere. As a con­cre­te example, we identify the ratio between attached to un­attached cells in the deep aquifers as a major contributor to the uncertainties associated with our estimate of the biomass of bacteria, archaea, and viruses. Improving our understanding of this specific parameter could help us better constrain the global biomasses of entire domains of life."

The paper also attempts to assess the impact of humans on the biosphere. Humans in toto weight about 3% of all animals and a bit less than all domesticated animals (≈0.06 Gt carbon vs. ≈0.1 Gt carbon). However, they out­weigh all wild mammals by about 10×. The authors also attempt to evaluate the impact of human activities on the biomass, but here uncertainties in the data tend to cloud the conclusions. However, estimates suggest that human activities have led to a significant decrease in the biomass of wild mammal, fish, and plants. I would think that this kind of information will transcend the limits of the biological discourse and be used to address social and political issues. 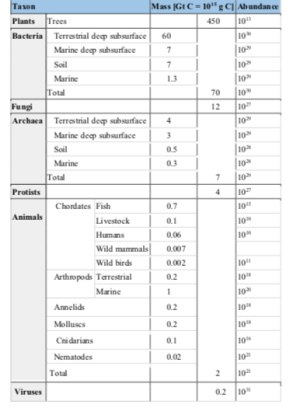 Figure 4. Summary of estimated total biomass and abundance of various abundant taxonomic groups. Values are based on a literature survey as detailed in the SI Appendix. Reported values have been rounded to the closest order of mag­nitude in log scale thus reflecting the associated level of uncertainty. Source

To return to the deeper meaning of this comprehensive and far-reaching exploration, I brought up to Yinon that most of plant biomass is made up of inactive extracellu­lar materials – think wood in trees, cell walls in the stalks of smaller plants. He agreed but reminded me that a lot of bacteria are in practically the same metabolically inert class (to see how the data stack up without such quasi non-living material, go to Fig. S1 in the paper's supple­men­tal material). So, it matters how you contemplate the biomass and what you mean by its weight. Regardless, these hard-won calculations will serve as a baseline for future considerations on the importance of this planet's passengers for the well-being of our spaceship.