How To Turn An E. coli  Into An Archaeon (Sort Of) 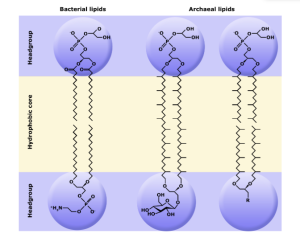 Things pop up in microbiology that are truly astounding. The claim that one can partially turn a bacterium into an archaeon rates high on this list. Archaea and Bacteria be­long to different main branches of the tree of life and have many distinctive biochemical and structural dif­fe­rences. Among the most telling of these are their mem­brane lipids, which in Bacteria (and Eukaryotes) have straight-chain fatty acids linked to the 3-carbon of gly­ce­rol through an ester link. In contrast, Archaea have iso­prenoids linked to the glycerol’s 1-carbon via an ether link. In addition, some Archaea go further along their own way and dispose of the lipid bilayer by fusing the tails of two phospholipid molecules to make a single layer, ostensibly for protection. One can turn to other salient differences between Archaea and Bacteria, such as their macromolecule-synthesizing ma­chinery, the structure of their cell walls, or to environmental their preferences. But the lipids cer­tainly have a strong hand defining the cellular differences between these two domains of life. 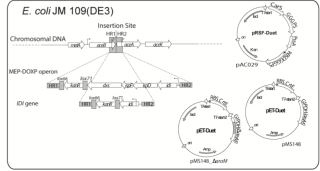 (Click to enlarge) Figure 2. Schematic re­pre­sen­tation of the engineering of E. coli JM109DE3 showing the integration of the MEP-DOXP ope­ron or the IDI gene into the chromosome and the three vectors harboring the genes encoding ether li­pids enzymes. For an explanation of what these genetic elements are see the text of the paper

Believing as I do that lipids don’t always get their proper respect and place in the biological limelight, I welcome such emphasis. It follows that if differences in lipid com­position matter, that these should be hard to manipulate. Imagine my surprise when I read a paper that reports the successful cloning into E coli of genes for archaeal enzy­mes involved in lipid metabolism, with the result that a substantial amount of its lipids is now archaeal. This should shake your faith in something. Is nothing sacred?

Researchers from various labs in the Netherlands engin­eered E. coli to make a membrane that has a hybrid (he­terochiral) composition, consisting of both ether-linked and ester-linked fatty acids, on either a glycerol-1-phos­phate or glycerol-3-phos­phate backbone. The trick, in brief, was achieved by cloning a number of ‘ether lipid’ genes and others from various Archaea and Bacteria to synthesize the archaeal equi­valents of phosphatidylglycerol and phosphatidylethanolamine. To maximize the yield, these ge­nes were placed under a lac promoter at a strongly transcribing domain of the chromosome, near oriC. Up to 30% of the lipids in this strain had the archaeal configuration. Note that the enzymes G3PDH and G1PDH, that are involved in the synthesis of glycerol-1-phosphate and glycerol-3-phos­phate respectively, do not share any structural or functional homology, being members of evo­lu­tionarily unrelated protein families. The authors also tampered with the polar head group to allow it to recognize the archaeal constituents. They carried out considerable work to demonstrate that the lipids made had the proper stereochemistry. This required determining the specificity of vari­ous enzymes involved in lipid synthesis towards the archaeal and bacterial substrates, as well as synthesizing a number of these compounds to compare them to the natural ones. By and large, the expected schemes checked out. 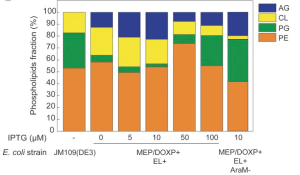 What is it like to be an E. coli with such an un-bacterial load of lipids? When induced to a moderate level, the cells grow well, at about the same rate as the parent strain (although what they show is a linear plot, which doesn’t allow one to readily 'read' what the exponential growth rate is. A semi-log plot, plus working at lower cell densities, would have helped here). They found, however, an apparent lag in growth, suggesting that the engin­eer­ed strain must undergo some adjustments (but apparent lags are also seen if the inoculum contains few viable cells). Inducing the cells to express their 'lipid genes' to a high level, however, causes problems. They now grow more slowly and become elongated and slightly thinner. Growth was slowed down and the cells made 'lobular appendages' that later became detached. The likely rea­son is that, when lipid production is increased, other cel­lular processes do not keep pace. Wisely, the authors concluded that for many of their experiments it was better to stick to conditions of lower levels of induction. 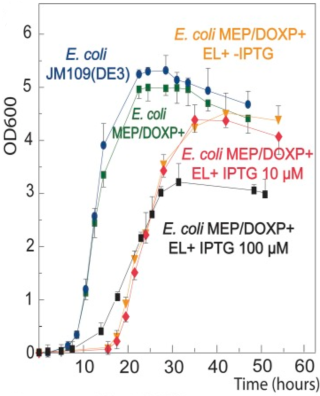 Next, how do the engineered strains respond to stresses? Keep in mind the propensity of Archaea to be extremo­philes. Indeed, exposure of these strains to 58°C reveal­ed an enhancement of resistance as compared to the con­trol strains, which did not survive 50°C. The chimeras were also better able to withstand freezing and thawing, as well as exposure to butanol. One unexpected and as yet unexplained result was that these cells became en­rich­ed for cardiolipin at the expense of phosphatidyl­gly­ce­rol.

How to reconcile these findings with the notion that the reason Archaea and Bacteria parted ways is that they made lipids that do not work in combination. This 'dis­cor­dant hypothesis' proposes that each kind of  homoge­ne­ous membrane is more stable than when combined to­gether. The authors say: “However, it is inherently diffi­cult to test such a hypothesis in vivo, as the conditions of early evolution would need to be replicated and one would need a microorganism with a mixed membrane.“ So, the present genetic manipulations yielded just the system needed for such in vivo testing. Clearly, archaeal and bacterial lipids can coexist in the same membrane, which gainsays the notion that they can’t.

Archaeal lipids are thought to confer greater resistance and better survival under harsh conditions. Overtly, this goes for the E. coli containing such lipids, whose fitness is somewhat improved upon some stresses. As the authors point out, greater robustness may be of use in biotechnological ap­plications. We have encountered stunning surprises before about what E. coli can and cannot do. Clone into it a single gene for the eukaryotic protein caveolin, and the cells become replete with membrane vesicles. Is there a general conclusion to be derived from such results? Prokaryotic cells, bacterial in the instance of the paper discussed here, can exist with significant deviations from their 'normal' biochemistry and appear to be much more malleable than one would have as­sumed. Yes, nothing is sacred!