I recently attended the ASM Microbe 2018 meeting in Atlanta and have a short report to make. I went to my first such meeting as a graduate student in 1952 and to many others subsequently, so this was hardly a new experience for me. One reminiscence: At the 1952 meeting, there was a dinner for the attendees, for which they had to pay. Not having much money, I skipped that. My reward was that I missed coming down with a food poisoning outbreak that affected many of the participants (the microbes’ revenge?). 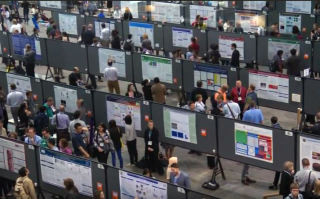 I don’t have a precise count of the attendees at this meeting, but there were many thousands. Please don’t laugh if I tell you that I thought that the place was full of young people, perhaps in greater number than before. What could be nicer? I hope it’s not just my old age speaking.

In recent years, ‘Microbe’ merged together two meetings, the traditional ASM annual meeting and ICAAC, a conference devoted to antimicrobial agents and chemotherapy. How does this merger work? I heard various opinions on this matter, but what I gathered from most is that it functions quite well. True, the meeting is now larger, but each of two previous ones was big anyhow, far from being a small, more intimate conference. Of course, an advantage of the current arrangement is that areas of scientific overlap will benefit from the greater spectrum of presentations. Let me make a general, if obvious, point about this. Microbiology is becoming ever more an integrative science and workers in traditionally distinct areas speak a common language and, increasingly, share a wide range of techniques. Consequently, microbial ecologists will now profit from listening to talks by clinical microbiologists and vice versa. Not so in the old days, when each branch of microbiology tended to build a defensive silo for itself. Almost.

With hundreds if not thousands of papers presented it would be silly to try to summarize all that transpired within the cavernous halls of Atlanta’s convention center (I was lent an electric  mechanical scooter to get around and managed not to hit anybody). But I came away with the thought that there was a theme that got special emphasis. It is what we could call 'microbes in space.' Not that 3-D microbiology is a new topic: see the pronounced concern for biofilms or complex developmental structures. But more is being done to include the role of space in many phenomena being considered. Due in good part to the development of wondrous techniques, the subject is acquiring a new depth and width. I have in mind such novel approaches as spectral imaging, as used in the Gary Borisy lab, which allows one to determine the 3-D location of dozens of florescent dyes, or, as in Dianne Newman’s lab, the hybridization chain reaction for studying complex microbial spatial relationship in the sputa of a patient. These and other stupendous technical developments have fostered the development of a new-sounding science, microbial biogeography.

Not all microbial biogeography depends on fancy new methods. See an example, presented by J. P. Barraza from Marvin Whiteley’s lab. They wanted to figure out why Pseudomonas aeruginosa and Staph aureus can coexist in the lungs of Cystic Fibrosis patients when in the lab pseudomonas kills the staph. Is space an issue? So, they grew the two organisms together in shallow containers, shaking one and keeping the other stationary. Guess in which the staph stayed alive and in which it died? Yes indeed, in the stationary culture the staph lived, in the shaken one it got killed. Under the microscope, the cells in the stationary culture made distinct, separate arrays, which ostensibly allowed the staph to live away from its killer. What could be simpler?

I won’t guarantee gems like this one at every session, but I can assure you of a good and informative time at future ‘Microbes.’ But there is more to this it than the science. You see, we share a lot with our fellow microbiologists. In fact, we belong to a guild, a point I made earlier here but which I would like to repeat in this context. I said then: ‘I am intensely aware that I belong to a group of people united by their particular professional interests. Whenever I meet another microbiologist for the first time, I feel a high degree of affinity with him or her. We can immediately converse about common interests, and especially about people we both know. There is usually only one “degree of separation,” two at most, depending in part on generational differences… Looking into this a bit deeper, I find that this sense of belonging matters a lot to me, and to my mental well-being, no less. I have derived and continue to derive emotional support from being a member of a community of people joined together by common experiences and shared concerns.‘ At meetings such as the one I attended, such matters come to the fore. I chanced upon old friends and made some new and valued acquaintances. It felt good. If you believe me, consider coming to future ‘Microbe’ meetings.

Abstracts for Microbe 2019 (San Francisco) are now open. Submit yours before August 3rd, 2018.

And of course, we also recorded a live episode of This Week in Microbiology with the entire TWiM team!