« Why, oh, why, can't life be less complicated? | Main | Cultivating the Uncultivable »

We are pleased to offer #204  of the monthly reviews of  protein spotlight, published by the Swiss-Prot team of the SIB Swiss Institute of Bioinformatics. Since 2000, protein spotlight articles describe a specific protein or family of proteins on an informal tone.

It has happened to all of us. You are seated in a good restaurant and the waiter has just brought you the wine you ordered. He solemnly shows you the label. You nod, and he proceeds to slit open the lead seal with the tip of his corkscrew. Pealing the seal off the bottle neck, he then screws the screw into the cork which he extracts with a muffled pop. He may bring the cork to his nostrils and sniff it, then with one hand behind his back, he will carefully fill the glass of the person who is to in­form him whether the wine tastes fine, or not. And on rare occasions, it does not. But you're never quite sure. So you ask the person sitting opposite whether they would care to try. And they're not sure either, so you both say to the waiter that the wine is lovely, thank you. Yet, over dinner, there's a slight musty taste each time you take a sip of wine. This characteristic faint off-taste – coined cork taint – is caused by the presence of chemical molecules known as chloroanisoles in the wine. Scientists recently characterized an enzyme, that they named chlorophenol O-methyltransferase, from the filamentous fungus Trichoderma longibrachiatum  that is responsible for their production. 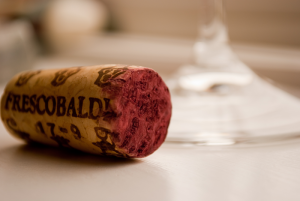 This may not sound like news. For years now, wine produ­cers have known that microbes are to blame for cork taint. However, it turns out that the microbes themselves are less to blame than the presence of chlorophenols on the cork itself. Chlorophenols are toxic chemical sub­stan­ces that derive from human economic activities. Among those responsible for introducing them into the en­vi­ron­ment are the pharmaceutical industry and numerous pes­ti­cides used for agricultural purposes. As the years went by, the accumulated presence of chlorophenols in our surroundings began to modify the quality of our water, soil and air, and their use in biocides has since been restricted in many countries – save the use of trichlorophenols (TCPs) in fungicides for wood, and hence cork oak (Quercus suber ). Most corks for wine bottles are made out of the bark of cork oak. If TCPs are present on the cork stopper be­fore bottling, and Trichoderma longi­bra­chi­a­tum  is lurking there too, then the fungus will pick up the TCPs and turn them into trichlo­ro­ani­so­les, which is what ends up tainting the wine.

No one knows the exact circumstances that led to the discovery of wine. It is likely that one of our ancestors picked berries which were kept in a bowl a little too long, and began to ferment. Dipping a finger in the alcohol lying in the bottom will have dealt with the rest. The oldest archaeological traces of wine – understand by this fermented fruit – were found in China and date back to 7000 BC. The first evidence of wine production dates back to 4000 BC in Armenia where wild grapes still grow today. Producing wine, however, means that you have to find a means of preserving it, and this was done by storing the wine in wooden barrels lined with pine resin. The taste for wine gra­du­al­ly spread westwards to Europe. By the middle ages, it had become a religious symbol for the Catholic Mass, and the Benedictine monks began to produce it on an industrial scale in France and Germany. The wine industry flourished up to the late 19th Century when grape phylloxera de­vas­ta­ted all of Europe's wine vineyards – save for those in the Balkans where local varieties still sur­vi­ve today. Since then, the art of wine-making has changed radically, and spread to other continents, such as North and South America, South Africa and Australia.

Chlorophenol O-methyltransferase, or CPOMT, is the enzyme that transforms trichlorophenols in­to trichloroanisoles (TCAs) in Trichoderma longibrachiatum  through O methylation. CPOMT pro­du­ces different kinds of TCAs, among which 2,4,6-TCA which is the essence of cork taint. CPOMT is actually induced by chlorophenols themselves. This implies that these particular chemical com­pounds – which stem from human industrial activities in the first place – are able to cross the fun­gal membrane and stimulate the synthesis of CPOMT which, in turn, transforms the toxic pollu­tants into the less harmful trichloroanisoles. There has not been enough time for evolution to de­sign an enzyme whose goal is to clean up our mess. So, the methylation of TCPs into TCAs must be due to a very fortunate set of circumstances, and CPOMT's main activity must be the methylation of substrates that still remain to be identified. Nevertheless, CPOMT is indeed expressed to counter the toxic effect of TCPs and therefore represents a form of resistance to man-made pesticides.

So, in a roundabout way, CPOMT is doing us a favour. Chlorophenols (CP) can indeed do a lot of da­mage to humans, not to mention other animals and no doubt plants. As an illustration, scientists have been able to associate CPs with lung cancer, asthma and heart disease in people who work in rural communities, pesticide manufacturing industries, textile industries or petrochemical indus­tries. Toxicity is due mainly to the high reactivity of the hydroxyl group in CPs that can react with proteins and nucleic acids (DNA) in the cell, thus resulting in serious cellular damage. When the hy­droxyl group is blocked by O methylation, almost all toxicity is lost; all you get is that mildewy taste in drinking water, certain foods, dried fruit, and... Brazilian coffee... 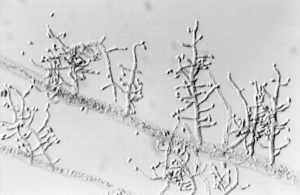 Like their substrates, though far less harmless, chlo­ro­ani­soles are also significant environmental pollutants and found in the soil, in rivers and marine sediments, in lakes and, of course, in the bark of cork oak. Though chemi­cal­ly very stable, they can be biodegraded by bacteria and lig­ninolytic fungi. Between the 1950s and 1970s, many hous­es in Sweden were built with wood that had been treated with pesticides that contained chlorophenols. This gra­du­al­ly created a major indoor environment problem with hous­es smelling musty and causing adverse health ef­fects. And you only need 2 − 4 ng of TCAs per litre of wine for humans to perceive cork taint. However, at each sniff (which is why you end up saying to the waiter that the wine is okay after all), we smell it less becau­se of our olfactory system's rapid habituation to TCA.

Trichoderma longibrachiatum  or CPOMT may present a way of getting rid of some of these harm­ful chemicals we have pumped into our environment. It would be helpful to develop reliable toxi­ci­ty tests to detect the presence – and levels – of chlorophenols at a specific location. The wine-ma­king industry loses 2 to 7% of its bottles every year – which is a lot of money too – and would bene­fit greatly from tests that could evaluate the presence of chlorophenols in cork planks before they are used to make cork stoppers or that could discern the presence of TCAs on the corks them­sel­v­es before they are inserted into bottles. Cork taint may also result from materials other than the cork stoppers themselves. Wine cellars are full of wood, from the barrels the wine is kept in to the cellar's ceiling constructions, and TCAs are particularly volatile and could easily contaminate part of the wine-producing equipment. In a way, cork taint is something of a backlash. And microbes seem to have found a way to deal with it faster than we have. 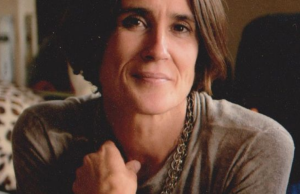 Vivienne is author of the  protein spotlight and of the book 'Tales From A Small World'. She is a mem­ber of the Swiss Prot outreach team at the Swiss In­sti­tute for Bioinformatics.