« The History and Politics Surrounding our Attempts to Harness and Control Germs | Main | How Much Does Biology Weigh? » 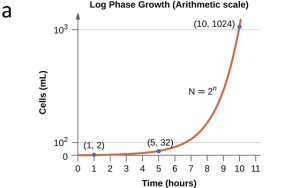 Figure 1a. Graphs illustrating population growth during the log phase for a bacterial sample with an initial population of one cell and a doubling ti­me of 1 h. When plotted on an arithmetic sca­le, the growth rate resembles a curve. Source. Frontpage: Bacterial growth phases. From a You­Tube video.

Take our word for it. For experiments involving growing cells, bacterial or otherwise, God meant you to pay at­ten­tion to the conditions of growth. He also meant you to plot the results of a growth experiment on semi-log pa­per. Why? Plotting the log of the number of cells versus time buys you the following:

Look at the two plots of the growth of an E. coli  culture in Figures 1a + 1b. Which of the two do you think is more informative? 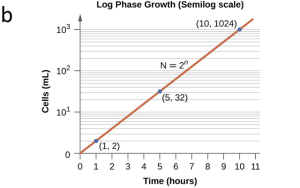 Figure 1b. Graphs illustrating population growth during the log phase for a bacterial sample with an initial population of one cell and a doubling ti­me of 1 h. When plotted on a semilogarithmic scale (meaning the values on the y-axis are loga­rithmic), the growth rate appears linear. Source

But don't take our word for it. Read instead two of the best things ever written in microbiology, 'Bacterial Growth: Constant Obsession with dN/dt' and 'Apples, oranges and unknown fruit', both by Fred Neidhardt. He said: "Whether the goal is modelling or simply any worth­while quantitative study of microbial me­tabolism or phy­siology, the brutal fact is that all the numbers depend on the growth condition of the cells being measured."

He said further: "Measuring and publishing the growth rate is the best way to define and authenticate the phy­siological state of the cells. Check your favourite journals. How many papers describe the growth conditions and re­cord the growth rate? The shameful fact is that studies are still being conducted with insufficient attention to growth conditions, and without mention of growth rate – 'early log', 'mid-log' and 'late log' are phrases that should be banned. However pain­stakingly acquired, the quantitative data from one laboratory can rarely be combined with those from another, and the databases for microbial me­tabolism and physiology consist of apples, oran­ges and unknown fruit."

What caused this outburst on our part? It is the great frequency with which these "Neidhardt te­nets" are not heeded. Often, the information on the growth conditions used in the experiment is scarce, as if supplied grudgingly. We are dismayed to see paper after paper showing growth cur­ves plotted linearly, without regard for the fact that as the culture's density increases with time, a straight line in a linear plot means that the growth rate of individual cells is actually decreasing. What does this tell you?

C'mon, let's do something…