« The Microbial Life Exhibition at the Harvard Museum of Natural History | Main | What To Do When You Run Out of a Cherished Symbiont? »

How to Build a Giant Winogradsky Column

In part one  of my tour of the Microbial Life exhibition at the Harvard Museum of Natural History (HMNH), I wrote that the microscopy station and the live bacterial colonies are my personal favorites. Actually, those are my second and third favorites. I was saving my "most favorite" exhibit for its very own post: a giant-sized, living and changing Winogradsky column. Invented by Sergei Winogradsky in the 1880s, these columns begin as little more than pond muck or garden soil, and over a few months in the presence of light, develop into vibrant displays of colorful microbial growth. Such muddy microcosms are a staple of general microbiology lab courses and the subject of microbial ecology research to this day. The one we made for the HMNH is simply an over-sized version of the classic set-up. Because I had the pleasure of seeing this one through design, sediment collection, incubation stages and even helped hoist it up on the final exhibit platform, I know everything about how it was made. To make the column, I drew from many resources, some traditional, others non-traditional, some easy to find, others not. I hope that this guide will help others who want to create such oversized Winogradsky displays. 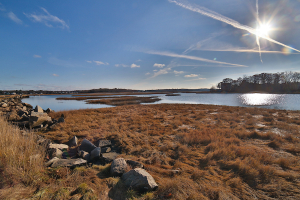 Figure 1. The sediment collection site: a marsh in Gloucester, MA.

The first consideration is the choice of size and shape of the display vessel. The typical shape is indeed cylindrical, although one may also design rectangular "Winogradsky panels." (See panel examples at Ginkgo Bioworks in Boston and at the Exploratorium in San Francisco). For the HMNH exhibit, we chose the classic column but modified it by designing an inner hollow space  with no sediment. Including such inner dead space greatly reduced the volume of sediment to be collected, the amount of additives needed, and the total weight, all without affecting the final result. No matter the shape, the vessel needs to be sealed since the microbes in there will produce unfavorable gases, like hydrogen sulfide. Working with Sylvie Laborde at the Harvard Museum, we designed a hollow 6 foot column with a sealed cap and strong base for mounting, and had it fabricated by a local plastic company. 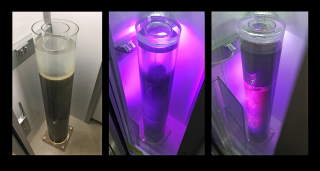 The making of a Winogradsky column is a fairly flexible and forgiving process. The first step where this flexibility is manifested is the selection of source of the sediment. One can collect it from fresh water rivers and ponds, all kinds of marine sites, or from backyard soil. The sediment contains the initial microbial inoculum. Thus, collecting sediment from sites with different physical and chemical properties which harbor different compositions of microbial species, will result in diverse visual properties and growth dynamics. I chose to collect sediment from a salt marsh north of Boston. I wanted to simulate the species and colors seen in layered microbial mats found in New England salt marshes. 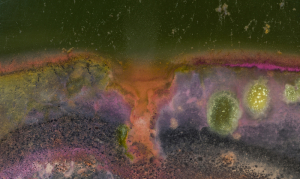 Next, I processed the sediment and introduced some key additives. I transferred the environmental sediment from buckets to a large container and removed large rocks and other debris by hand. I then took an extra "non-traditional" step by mixing the sediment with diatomaceous earth (sold in bulk at hardware stores for insect control) and sand. My final mix was over ten gallons: equal parts processed sediment, diatomaceous earth, and sand. Because the diatomaceous earth is white, it lightens the mixture from dark brown to gray. This allows for greater contrast and visibility of microbial colors. Furthermore, the fine diatomaceous earth and sand particles make the mixture more homogenous and provide fresh surface area for microbial colonization. I added marsh water as needed while mixing, looking for a smooth, goopy, yet pourable mixture with the consistency of pancake batter.

I then added nutrients to support microbial growth. These nutrient additives are detailed in an excellent guide from the American Museum of Natural History. Just like with any culture medium in the lab, you need to add nutrients that promote microbial growth. Most homemade "recipes" call for a carbon source in the form of shredded newspaper (cellulose), and egg yolks as a sulfur source. You can also experiment by adding various nitrogen and phosphorus sources, but such additions are not required. Shredded newspaper acts as a slow degrading carbon source. If you work in a lab, you might also add a readily available carbon source like pure powdered cellulose. My "master mix" included both newspaper and egg yolks, as well as powdered cellulose, and additional nutrients from the lab.

Filling the column, choosing the lighting and incubation

Once I had my master mud mix, I set up the plastic column in a walk-in 25°C incubator in the Losick Lab, a few buildings over from the HMNH. With nothing more than patience and a funnel, I slowly transferred the mud mix from the buckets into the outer space of the column. I filled about three quarters of the total volume with the mud mixture, topped it off with marsh water (and some synthetic sea water) for an upper aqueous phase. I finally placed a tightly sealed plastic cap on the top of the column. 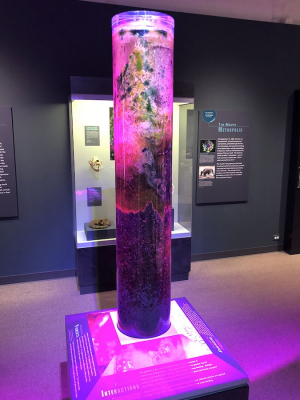 Figure 4. The column in place at the Harvard Museum.

Exposing the column to light that promotes the growth of photosynthetic species is the critical step. Bacteriochlorophyll and carotenoid pigments produced by purple photosynthetic bacteria and green sulfur and non-sulfur bacteria underpin the microbial growth patterns ranging from reds, purples, to oranges and greens in the anaerobic sections of the column. Meanwhile, aerobic cyanobacteria and algae turn the upper aqueous phase a dense green and yellow. Since we wanted robust growth on all sides, the standard sunlit window was not an option. I did some research and ultimately chose to use a variety of LED grow lights, the same energy-efficient lights used to grow plants indoors. Blue and red diodes within these LED arrays maximize light output in the parts of the visible spectrum utilized by the photosynthetic microbes. The combination of LEDs appears as a pink cast which, incidentally, makes for a fun visual effect.

Mounting and admiring the final product

We mounted the incubated column on a platform and placed interpretive panels below. The display has undergone continual transformations since the opening in February of 2018. A thick cyanobacterial and algal biofilm grew on the upper aqueous phase. The film wrinkled and grew so thick that one can hardly tell that there is water in that part of the column, except for a few windows where there are tears in the biofilm. We expect that this column will continue to develop for at least a decade, and hope that it remains in the museum for a very long time.

The Winogradsky column at the HMNH is not only my favorite exhibit at Microbial Life, it has also become a crowd favorite. Mark Carnall, Collections Manager from the Oxford University Museum of Natural History, tweeted photos during his visit, commenting that it is, "one of the nicest Winogradsky columns," and that it "Looks good enough to eat." We really appreciate that positive feedback! I'm not sure about the eating part though. If I ever removed the cap, there would be such a sulfurous blast of rotten egg smell that you might not eat anything for the rest of the day. It is beautiful to look at though, that is for sure! From the 1880s until today, Winogradsky columns remain one of the best ways to bring invisible microbes and their activities into the visible realm for all to see.

*All images taken by and courtesy of Scott Chimileski 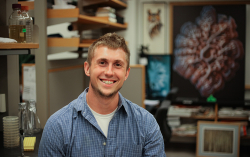 Scott Chimileski is a postdoctoral fellow in Roberto Kolter's laboratory at the Harvard Medical School in Boston, MA. Along with Roberto, he authored the book: Life at the Edge of Sight. More of his microbiology photography can be found on his portfolio website, Into the Microbial World.