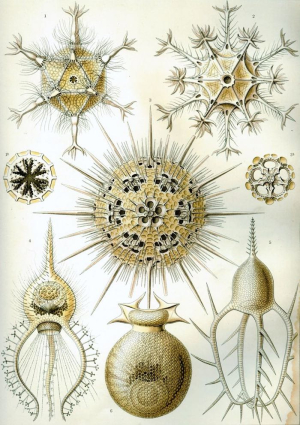 Silicon is the second most abundant element within Earth’s crust and is necessary for the livelihood of pro­tists, plants, and animals. Maybe best known, silica (SiO2 or opal) is used by marine organisms such as diatoms and rhizarians to build their glassy and often beautiful shells.  Less widely appreciated is that many plants, espe­cially grasses like rice, contain 5-10% of their dry weight as silicon. It performs vital functions, such as contributing to the strength of the stems, improved drought tole­ran­ce, and heightened resistance to fungal and bacterial in­fections. When it comes to animals, silicon is an essential element, albeit required in small amounts. It is necessary for making collagen and bone and thus is found in bone-making cells, especially in their mito­chondria. (All told, the human body naturally carries about one gram of si­li­con.) And beyond Earth, it is fodder for science fiction writers who look to silicon as an alternative to carbon-based life (need proof?– silica was found on Mars by the rover Spirit). Yet despite all of the ways that silicon con­tri­butes to the vitality of living systems, its biogeochemical cycle has been neglected.

It is in the oceans that the silicon cycle predominates. Here is where most of the exchanges of this element take place. Much of it is in the form of silica (SiO2) originating from rivers and glaciers, subma­ri­ne volcanic activity and its hydrothermal vents, plus from the weathering of marine basalt. The amount en­tering the oceans is impressive, totaling more than 108 tons per year.  Recycling of silica via biological activities varies from place to place but it involves about 10% of the total dissolved silica per year, which is a staggering amount. Diatoms account for the majority of this turnover, followed by Rhizaria, some flagellates, and some sponges. 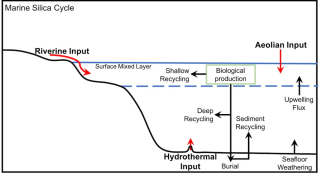 Figure 2. Cycling of silica in the marine envi­ron­ment. Silicon commonly occurs in nature as sili­con dioxide (SiO@), also called silica. It cycles through the marine environment, entering pri­ma­rily through riverine runoff. Silica is removed from the ocean by organisms such as diatoms and ra­diolarians that use an amorphous form of silica in their cell walls. After they die, their skeletons settle through the water column and the silica re­dissolves. A small number reach the ocean floor, where they either remain, forming a siliceous ooze, or dissolve and are returned to the photic zone by upwelling. Source

A recent paper  describes the unexpected role for certain rhizarias in the recycling of silica.  But first, what are the Rhizaria? They are giant ameboid protists (a half a mm across or greater) that include two major groups, the Ra­diolaria, known for sporting many needle-like pseudopods, and the lesser-studied Phaeodarea, which were recently split off from the Radiolaria on phylogenetic grounds. Both group make siliceous shells and in therein they differ from the equally fascinating Foraminifera, whose shells are made of calcium carbonate.

The researchers got their samples off the coast of California from depths down to 500 meters. They measured the silica content of 65 Pheodarea specimens, which turned out to be 0.37–43.42 μg Si/cell. With this information at hand, they calculated the silica flux between the various layers of the ocean.  It was known already that the transport of silica between the upper, light-receiving layer and the dark layer (starting at 200 meters down) by pheodarians is only 10% of the total. These investigators found that at greater depths (the 200-1000-meter-deep mesopelagic zone), the values were surprisingly higher, reaching 26% of the total silica flux. Being so large and with their high silica content, pheodareans sink at faster rates (23 m/day) than smaller species. Such trans­port of large amounts of silica to the bottom of the ocean is likely to have a large influence on the silica cycle.  In this study you will also find how the parameters of silica transport vary with geography and climate. 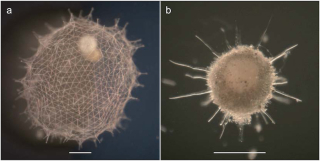 Figure 3. Micrographs of representative giant Phae­odaria from the families (a) Aulosphaeridae and (b) Castanellidae collected from the California Current Ecosystem. Scale bar = 500 μm. Source

There are several practical reasons why these siliceous organisms have been snubbed in comparison with other kinds of plankton. Pheodarea are delicate and break up when gathered with standard plankton nets, they are not well preserved in sediments, and they do not fossilize readily. Given that standard methods for gathering zoo­plankton specimens don’t work well here, the researchers moved on to a number of specialized techniques, hardly the ones used in a regular microbiological laboratory. They handpicked individual pheodareas from sediments and measured the silica content of single cells ranging in size from 470 to 3,920 μm.  To get an estimate of the volumes of the cells, they made morphometric mea­surements of their length and width. Further, they carried out in situ imagery using an underwater ca­mera rig called the Underwater Vision Profiler 5. This special camera is plunked down into the water column, where it can quantify the vertical distribution of particles >100 mm in size in real time.  In ad­dition, they deployed drifting sediment traps that contained a brine with formaldehyde for specimen preservation.

The silicon cycle does not occur in isolation. Quite the contrary, it is intimately connected to the carbon cycle, ergo to our concern for global warming. There is in fact a little appreciated carbonate-silicate cycle that deals with the transformation of silicate rocks to carbonate rocks and back. The former takes place by weathering and sedimentation, the latter by metamorphism and magnetism. This cycle matters a great deal in the carbon cycle and to the rate of release of carbon from rocks. One of the several che­mical reactions involved is the formation of carbonic acid in the atmosphere. This is a weak acid, but strong enough to dissolve silicate rocks, releasing soluble silica that eventually finds its way into the oceans to be incorporated into silicate shells, as we saw above. The role of Pheodareans in the carbon cycle is further highlighted here. The shells of dead organisms fall to the ocean floor, eventually to re-form calcium silicates and releasing CO2 in the process (the reaction looks like this: CaCO3(s) + SiO2(s) <=> CaSiO3(s) + CO2(g). In this planet’s history, the predominant reaction was to the left and thus a lot of CO2 was removed from the atmosphere. The result may well have been an ice age. Do you now agree that the silicon cycle deserves greater attention?

I thank David Lipson of San Diego State University for suggesting this paper.