« What To Do When You Run Out of a Cherished Symbiont? | Main | More Respect For the Silicon Cycle, Please »

If you'd ask people around you which hand tool characterizes a professional microbiologist, they would probably come up with the microscope. Much like hammer and saw would be named as typical car­pen­ter tools, or the plough as typical for farmers ('hammer and sickle' is a similar case, yet not the point he­re). The light microscope is in fact so much at the heart of microbiology – and biology in general – that one central theory, the cell theory, could not have been developed with­out it. But when the small things gather en masse  in lakes and in the seas their assemblies, called "blooms", can be so huge that micro­biologists have to turn to "macroscopes", that is, satellite ima­gery, to see them in their full glory. 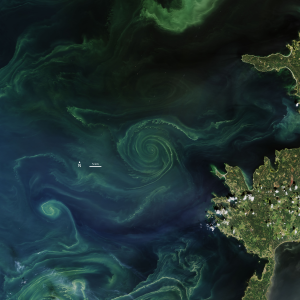 The NASA Earth Observatory published these days a stun­ning true-color satellite picture of a swirling green phyto­plank­ton bloom in the Gulf of Finland, a section of the Baltic Sea (Figure 1). Though it's impossible to know the genus and species without sampling the phytoplank­ton from the water, earlier studies by satellite observa­tions combined with in si­tu  sampling suggest that this par­ti­cu­lar "swirly" green bloom is likely to be cyano­bac­te­ria, pro­bably Nodularia. Some of the green could come from dia­toms, unicellular eukaryotes that are also rich in chloro­phyll. The Finnish Environment In­stitute (SYKE) has obser­ved the recent bloom from the wa­ter and found it to be mostly cyanobacteria. This was also evi­dent from the lar­ge amounts of cyanobacteria that were found at the Finn­ish beaches at the time of the bloom. (Figure 2).

If you look more closely at the superb vortex in Figure 1 you may wonder why it is not completely  like the vortex you see when you pull the plug in your bathtub. First, and unlike the situation in your bathtub, the direction of rotation, clockwise or counter-clockwise, is dictated by the Co­ri­olis force for vortices of this size. Second, there was nobody covertly pulling a plug at the bottom of the Baltic Sea near the Finnish coast. How do we know? What you do not see  is the typical 'bathtub vortex' with an indent in the center where air is pulled down together with water. This indicates that the vortex in Figure 1 is oriented upwards (and technically called an "eddy" or "gyre"), that is, it moves water and dissol­ved nutrients (NO3, nitrate, PO4, phosphate, and trace metals) from the bottom of the Baltic Sea to the upper layers of the water column. This enables explosive phytoplankton growth in the upper ~200 m, close to the surface. But, alas, vortex physics are highly complicated, as are most of fluid dy­na­mics. Not the least because physicists still struggle to fully understand the transition between laminar flow and turbulent flow, for which vortices are a special case. (Fun aspect: it's unlikely that you have es­timated how long it would take to drain the world's oceans by pulling the plug from an imaginary 10 m wide "hole" in the Mariana Trench. I think you will enjoy the calculation here.) 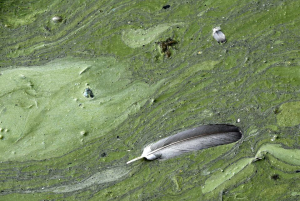 Without diving any deeper into vortex physics (pun inten­ded), it is safe to state that the rotary movement of the ed­dy is trig­gered by underwater currents at different depths that slowly mix water bodies of different temperatures and salinities, that is, different relative densities. The ed­dy is given its final shape by the Coriolis effect and the winds above sea sur­fa­ce. And yes, in contrast to what I said a few lines before, there is in fact an "upwelling" in the center of such eddies which can be measured by ca­reful examination of satellite pictures, and was found to range between 0 and 3 m for ed­dies with a diameter of >50 km (not discernible in Figure 1 due to the limited re­solution and the vertical imaging). The existence of such eddies, which can last for weeks or months, is now well documented for the Carribean Sea and can help to explain why phytoplankton blooms are also observed in the notoriously nutrient-poor Sargasso Sea.