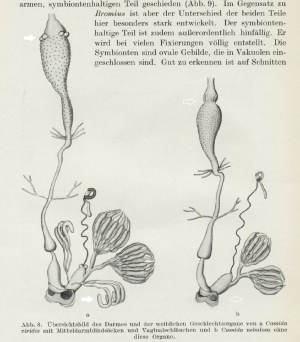 Way back in 1936, the zoologist H.-J. Stammer published a study of various beetles of the Cassidinae family (order Co­le­o­ptera) and their microbial symbionts. Among them was the thistle tortoise beetle, Cassida rubiginosa (front­page), an obligate foliovore, or put another way, a dedi­ca­ted vegan with a penchant for thistles (Cirsium sp.). Thistles were a pest for farmers in the pre-Roundup™ age, and some de­li­be­rately distributed C. rubiginosa in their grain fields to keep their growth at bay. Today, or­ganic farmers are again aware of the beneficial action of these beetles in protecting their crops (and consider Roundup™ a pest). Beauty and pests are, as always, in the eye of the beholder: another member of this family of vegans with 419 described species, Cassida vittata, snacks on sugar beet (Beta vulgaris) and is consi­de­r­ed a pest by farmers in the Mediterranean and the Middle East.

In histological thin sections, Stammer found bacterial sym­bionts in two specialized organs of C. rubiginosa, C. viridis, and three other Cassidinae: in the "Mitteldarm­blindsäcke", appendices at the lower part of the foregut (or at the upper midgut, but I won't start arguing with anatomists), and in the "Vaginalschläuche", appendices of the vagina in females. As both organs will be mentioned throughout this and the follow-up text yet their names are a pain even for (my) German ears familiar with long com­posite nouns, I will refer to the former as 'FG apps', and to the latter as 'OV vag tubes' (you can localize them in Figure 1 to not get lost in insect anatomy). Fun fact: the 'OV vag tubes' in C. viridis were first described by the French zoologist Dufour in 1825, six years before Darwin embarked on his voyage with HMS Beagle. 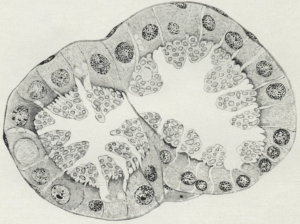 Figure 2. Section of the Cassida viridis 'FG apps'. Intracallular symbionts are visible in vacuoles of the epithelial cells. Note the pairwise arrange­ment of the 'FG apps' with the thin septum in between. Source

Interestingly, Stammer did not find these two conspicu­ous structures in C. nebulosa and C. flaveola, two Cassi­dinae species that he both found to be symbiont-free. He con­clu­ded, with a whiff of frustration: "The simultaneous absence of both organs is very striking and shows the close re­la­tion­ship between them. Unfortunately, it can­not be decided whether there is no symbiosis because the organs are mis­­sing or whether the organs are mis­sing because there is no symbiosis" (author's translation). While he observed the C. viridis symbionts inside vacu­oles of epithelial cells of the 'FG apps' (Figure 2) they were extracellular in high numbers and covered by a vaginal secretion in the lumen of the 'OV vag tubes' (Fi­gure 3A). Vertical transmission, to use present-day ter­minology, is apparently assured when eggs leave the va­gina with a "caplet" at the anterior pole, a patch of secretion-covered symbionts (Figure 3B), and the symbionts gobbled up by the hatching larvae not much later (4 days up to 2 weeks, depending on temperature). But why do C. viridis and C. rubiginosa put so much effort into offering their sym­bionts a "safe haven" by changing their own morphology – as compared to their symbiont-free cousins C. nebulosa and C. flaveola – and safeguard their vertical transmission by covering them in a secretion "caplet" that hatching larvae can't miss to eat? Stammer did not touch this topic, but it's not far-fetched to guess that it has something to do with nutrition... 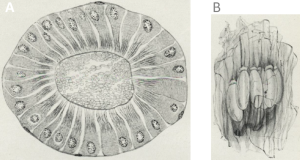 Figure 3. A Section of the C. viridis 'OV vag tubes' showing the symbionts in the lumen. B batch of C. viridis eggs with the prominent symbiont-con­taining "caplet" on top. Source

Herbivorous arthropods, vegan insects, come in two fla­vors, or call it "tribes" minus a phylogenetic connotation. One tri­be, the fans of junk food, have developed intricate drilling tools in their mouth parts that allow them to pierce plant phloem cells and suck the sucrose-rich sap contained with­in. But since they can't survive by nipping on a sugar-rich soft drink they depend on bacterial sym­bionts that contribute essential nutrients and metaboli­tes, in many cases amino acids and vitamins. The other tribe is more into wholefood but faces the problem of getting access to the highly nu­tri­ti­ous plant cell content that is concealed behind the cell wall, a pectin matrix ri­gidified by interwoven cellulose and hemi­cel­lulose threads. Appropriate tools to break down plant cell walls enzymatically are pectinases, but pec­tinase genes don't belong to the "basic equipment" of insect genomes. However, with such genes pre­sent in numerous fungal and bacterial genomes, two solutions are at hand for the always-hungry vegan insects: acquire pectinase genes by hori­zontal gene transfer (HGT) or hire a symbiont. Pectinase genes (plural) because there are, basically, two types known: PG and PL, which target the most abundant pec­tin variants, homogalacturonan and rhamnogalacturonan I. The stick insects (Phasmatodea) – or more precisely: their common ancestor – solved the problem once and for all by HGT from a close relative of the Enterobacteria­ceae Erwinia or Pantoeae (see here in STC). Similarly, weevils (Curculionoidea), long-horn beetles, and leaf beetles (Chrysomeloidea) share a set of homologous pectinase genes, who­se origin can be attributed to HGT from an ascomycete ~200 million years ago.

In the follow-up, 'Snacking on thistles (second bite)', I will come back to the above "why"-question and discuss a very recent study presenting evidence that C. rubiginosa chose the second option, that is, hi­ring a pectinase-proficient symbiont.