« Snacking on thistles (first bite) | Main | Of Mountains and Microbes… »

For the thistle tortoise beetle, Cassida rubiginosa, biting once into its preferred food is not enough, it takes a second bite. So, 80 years after the first description of a bacterial symbiont in C. rubiginosa by H.-J. Stammer, Hassan Salem and colleagues took up the thread and studied the symbiont to more de­tail. 16S rRNA-typing of four C. rubiginosa populations from New Zealand, the U.S.A., Germany, and Japan revealed Wolbachia in 44% of their samples and in all samples (100%) an unknown Gamma­pro­teo­bac­te­ri­um. Detecting Wolbachia was no surprise as this bacterium infects at least 20% of all known insect species, one study even claims a stunning 66%. The com­plete 16S rRNA sequence of the new­bie, which they aptly named Stammera capleta, allowed the researchers to place it among the Ente­ro­bac­teriaceae, phylogenetically close to the endosym­bionts Buchnera aphidicola and Carsonella ruddii, and the extracellular symbionts Pantoea carbe­kii, Ishikawaella capsulata, and Tachikawaea gelatinosa (Buchnera can be cultured in an insect cell line but no other of these symbiotic bacteria are cultivable – except by their hosts, of course – but I found sticking to the rules and typing the "Candidatus" prefix se­rially to all six simply too... well, tiresome). The genomes of Enterobacteriaceae typically range in size fom ~4 to ~6 Mb. In contrast, the members of the "symbiont branch" of the Enterobacteriaceae are no­to­rious for their reduced genomes (0.16 – 1.2 Mb), reflecting both their own host-dependency and their benefit to the host by providing necessary metabolites or enzymes that the host is incapable of syn­the­sizing. In this sense, genome size can serve as proxy for metabolic versatility. Salem et al. sequenced the Stam­mera capleta genome, and found it to be just 0.27 Mb in size, with an extraordinary low GC-con­tent of just 15.4% (garden-variety entero genomes have ~50% GC). They detected a meagre 251 open reading frames for proteins in this genome, and genes for the citric acid cycle, flagellar moti­lity, long-chain fatty acid synthesis, phospholipid and purine synthesis, vitamin B synthesis, and for all essen­tial amino acids are missing. I can't resist borrowing from Elio and call Stammera another bacterium "that doesn't know how to tie Its own shoelaces". Taken together, all this makes it the (so far) smallest genome of an extracellular symbiont. But as it has only been found "outside" when embedded in host secretions, its viability as planktonic cells remains questionable. Not in question is the status of Stam­me­ra as an obligate symbiont. 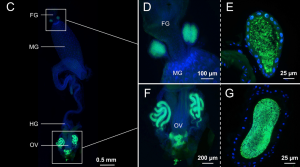 Salem et al. confirmed Stammer's localization of the symbio­tic bacteria in C. rubiginosa by fluorescence in situ hybri­di­za­tion (FISH) targeting 16S rRNA of Stammera, which gave clear signals within an adult female beetle's 'FG apps' and 'OV vag tubes' (Figure 1). Note that this technique did not allow them to unambiguously clarify whether Stammera was indeed intracellular in the four pairwise arranged 'FG apps', as suggested by Stammer, or rather contained in an extra­cel­lu­lar matrix (Figure 1E). It is conceivable that hatching C. ru­bi­gi­no­sa larvae, males and females, acquire the symbionts by eating their way out of the egg, and the symbionts pro­bab­ly find their way to the 'FG apps' more passively. How the symbionts mi­grate from the 'FG apps' to the 'OV vag tubes' of females is unknown but insect anatomy points to a direct route, that is, by leaking through the entire mid- and hindgut to the rectum where the latter meets the oviduct. It's known, on the other hand, that Buchnera endosymbionts of aphids can and do leave "their" bacteriocytes, by exocytosis, and reach the ovarioles, by endo­cytosis, via the hemocoel – but only if they hurry up because they de­te­rio­ra­te rapidly once they're "outside". By using a similar indirect route, Stammera could, in principle, reach the 'OV vag tubes' of female C. rubiginosa beetles, but this remains speculation for now.

By monitoring the number of C. rubiginosa symbionts across the various developmental stages of the beetle by quantitative PCR (qPCR), Salem et al. found ~3×106 in reproductively active females, a "star­ter population" of ~8×104 cells in the caplet of each egg, steadily increasing symbiont numbers during development, and ~9×105 in the 5th instar (they note that these numbers are ge­nome num­bers and not cell numbers since it is not known whether Stammera cells are monoploid). Surpri­singly, they found the symbiont numbers reduced to a few hundred in pupae, that is, during meta­morphosis. The cause for this steep drop is unknown but it seems unlikely that the symbionts sim­ply die of nutrient deprivation du­ring the pupal stage that lasts for no more than ~10 days. Thus, the real bottleneck for vertical trans­mis­sion of Stammera in its host is apparently not their migra­tion from the 'FG apps' to the 'OV vag tubes', or the caplet stage, which seems particularly risky at first sight, but the beetle's last developmental sta­ge before emergence of the imago (=adult) from the pupae. 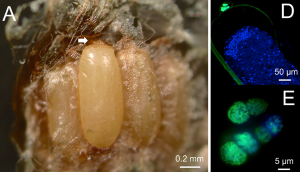 Figure 2. A Cassida rubiginosa eggs topped with caplets (arrow) at the anterior pole. FISH of a cross-section featuring an D egg and its E caplet highlighting the localization of Stammera within the spheres. Source

I concluded the 'first bite' with the question: why does C. ru­bi­ginosa put so much effort into offering its symbiont – a ra­ther incapacitated one, as we now know – not only free food but, in addition, a "safe haven" by covering it in secretion and even changing its own morphology? When Salem et al. raised aposymbiotic, that is, symbiont-free offspring from eggs in which the caplets had been steri­lized they found a survival rate of only 20%, a significant decrease compared to 70% survival of untreated eggs and 60% of control eggs (same sterilizing ethanol-treat­ment but without needle-pier­cing of the caplet). Clearly, the developing beetles fared much better avec symbionts!

To chew again, briefly, on a chunk from the first bite: vegan insects that prefer wholefood over phloem sap face the problem of getting access to the highly nutritious plant cell content that is concealed be­hind the cell wall, a pectin matrix. Since insect genomes are devoid of pectinase ge­nes they're left with two options: acquiring pectinase genes by HGT – that's what the stick insects did – or hiring a symbiont. Salem et al. obtained evidence that C. rubiginosa hired the symbiont to compensate for its lack of own pectinase genes. A comparative transcriptomic analysis of the 'FG apps' and the beetle's whole body revealed two transcripts that both matched exactly two puta­tive pectinase genes, PG and PL, in the Stammera capleta genome, and which were both signifi­cantly enriched in the 'FG apps'. No other tran­scripts coding for putative pectinases were reco­vered, indicating that the symbiont is likely the sole source for such enzymes in this symbiosis. In thin sections of C. rubiginosa stained with a PG-specific antibody, the Stammera-produced PG was preferentially found in the 'FG apps', in line with the tran­scriptional profile (Figure 3D). 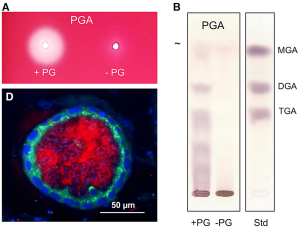 To actually nail the enzyme activity, which was so far "pu­ta­ti­ve" because derived from protein sequence compari­son, the researchers cloned the Stammera PG gene in E. coli. The heterologously expressed protein showed PG activity in an agarose diffusion assay with polygalacturo­nic acid (PGA) as substrate and (pectin-specific) rutheni­um red as indicator (Figure 3A). Analysis of PGA-break­down products by thin-layer-chromatography (TLC) in­di­cated that the hetero­ge­ne­ous­ly expressed Stammera PG is an endo-active enzyme capable of cleaving (biting!) homogalacturonan into galac­tu­ro­nic acid oligomers, as well as trimers, dimers, and mono­mers (Figure 3B). Al­though the same approach was so far unsuccessful for the Stammera PL enzyme, Salem et al. found a significant decrease in PG and PL activity in cell ex­tracts of aposym­biotic larvae as compared to extracts of symbiont-con­tain­ing larvae. It is reasonable, therefore to conclude that Stammera contributes to the wellbeing of its host by providing the pectinases necessary to get full access to food. Since pectinases are normally secreted proteins, the identification of genes for a putative homolog of SecA, a protein translocase, and for a putative pectinase production regulator, CorA, in the Stammera genome further supports this conclusion.

The C. rubiginosa–Stammera symbiosis is certainly not a 'defensive symbisosis' like the beewolf–S. phi­lanthi symbiosis, but also not a classical 'nutritional symbiosis' like the aphid–Buchnera sym­biosis, in which the symbiont contributes essential nutrients for both partners. Stammera pro­vi­des "tools" for get­ting access to food for both partners. Therefore, and to avoid further "granu­la­ri­za­tion" of categories, I suggest to call it a 'nutritional symbiosis sensu lato'.