« How to Build a Giant Winogradsky Column | Main | Occasionally, Microbiologists use Macroscopes... »

What To Do When You Run Out of
a Cherished Symbiont? The answer is easy: pick up another one. This happens with the cicadas, those noisy insects that have been in the mindfulness of humans since antiquity. Cicadas, like aphids, psyllids, leafhoppers and others, feed on plant sap fluids, which are rich in sugars but poor in amino acids and vitamins. Cicadas, then, are totally dependent on symbionts for their supply of what to them are essential amino acids and some other nutrients. Without such symbionts, such as the bacteria Sulcia and Hodgkinia, the cicadas would starve to death. However, these are iffy partners because, as is often the case for bacterial endosymbionts, their genomes are highly reduced, so much so that these bacteria may be on the way to being cast off. In some instances, this has already happened. So, what is a cicada in such a predicament to do? Displaying a sensible degree of promiscuity, cicadas pick up new partners, in this case, fungi endowed with biochemical skills similar to those of the partner they lost. 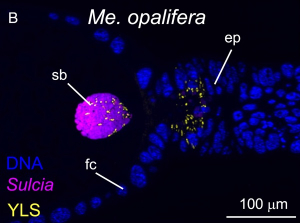 To pick up the story a step or two back, in some lineages of cicadas the Hodgkinia genomes are either absent or broken up into small minicircles (this remind me of the unusual genomic arrangement of the kinetoplasts of trypanosomes). Studying Japanese cicadas in particular, the authors of a recent paper found that all these species possessed the genomes of Sulcia, but, despite a comprehensive PCR and metagenomic analysis, only 9 of 24 of them had the genes of Hodgkinia. The Sulcia genomes are reduced, less than 0.3 Mb in size, good for some 200 genes max, but otherwise utterly kosher in carrying the genes required for the biosynthesis of cicada-essential amino acids. Not so for these cicadas' Hodgkinias, whose genomes are fragmented and quite different from the genomes of 'regular' ones found in other cicadas. Missing from these fragments are the genes that encode the biosynthesis of various essential nutrients, namely histidine, methionine, cobalamin, and riboflavin, which are not carried by the Sulcia. So, how do these cicadas cope with the dire need to acquire those nutrients that are essential to them?

The answer is that these cicadas contain yeast-like fungi that are seen by dissecting the insects and looking under a microscope. The Hodgkinia-lacking cicadas always have fungal associates, suggesting that evolution ensured that the bacterial symbionts are replaced by fungal ones. No species of cicadas was found possessing both Hodgkinia and fungi. 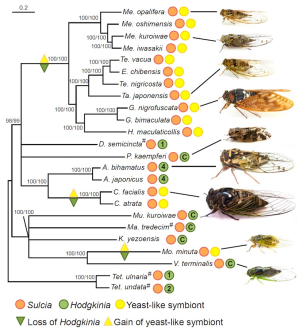 Figure 3. Phylogenetic relationship of cicadas and their infection status with microbial sym­bionts. A maximum-likelihood phylogeny infer­red from 15 mitochondrial gene sequences and 22 tRNAs (14,733 aligned nucleotide sites) of 20 Japanese cicada species, together with 4 previ­ously studied American species (highlight­ed by #), is shown. Detected microbial symbionts are mapped on the right side of each species name with orange circles for Sulcia, green circles for Hodgkinia, and yellow circles for the yeast-like fungal symbiont. In the green circles of Hodg­kinia, the number 1, 2, or 4 indicates the num­ber of distinct Hodgkinia genomes that form a complex. C (green) indicates highly fragmented Hodgkinia complexes in which the exact num­ber of genomes could not be determined. Colored triangles on the phylogeny indicate the es­ti­ma­ted replacement events from Hodgkinia to the fungal symbionts. Selected images of adult ci­ca­das are depicted to the right of the maximum-likelihood phylogeny. For the names of the species, see the text. Source

The main fungal symbiotic species belong to an interesting genus, the Ophiocordyceps. These are well studied parasites of insects. Some "enslave" ants and other insects by growing in their brain and modifying their behavior. The result is that the insects are driven to climb up plant stalks and impale themselves up high, the better for the emerging fungi to spread their spores. We have told this story a couple of times in STC (see An Evolutionary Tale of Zombie Ants and Fungal Villains & Knights and Tales From Planet Fungus)

The fungi found in these Hodgkinia-less cicadas are up to the task of providing essential nutrients to their host. The authors say: "The fungal symbiont genome of Meimuna opalifera retained all synthesis pathway genes for essential and nonessential amino acids, B vitamins, and nitrogen recycling, which included the synthesis pathway genes for histidine and methionine that are provisioned by Hodgkinia. These results highlight metabolic versatility of the fungal symbiont that is more than sufficient to compensate for the absence of Hodgkinia." To ensure vertical transmission, these fungi, along with Sulcias, are located not only in the specialized symbiont-carrying structures (bacteriomes, bacteriocytes) but also in the developing oocytes.

The authors tried to cultivate the fungi from a number of cicadas but only succeeded with the symbionts of Meimuna opalifera (could this be because in this host the fungal-symbiont replacement is at an early stage?)

It is evident that these fungi have a strong affinity for insects and that their interactions span from the parasitic to the symbiotic. In the words of the authors: 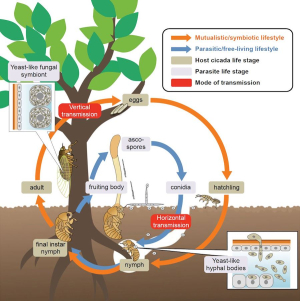 Figure 4. Schematic illustration of the hypo­the­tical ecological and evolutionary scenario as to how the fungal symbionts have been recruited from fungal parasites in cicadas. Source

"These results unveiled that while the ancient bacteriome symbiont Sulcia has been stably maintained in cicadas, the bacteriome cosymbiont Hodgkinia has not, which may be related to the extreme genome degeneration and fragmentation observed in some Hodgki­nia linea­ges." A detailed phylogenetic analysis revealed that the Hodgkinia-fungus and fungus-fungus replace­ments took place not just once but several times along different evolutionary paths. Thus, acquisition, loss and repla­ce­ment probably took place in a dynamic way. In the authors' words: "These findings highlight a straightfor­ward ecological and evolutionary connection between parasitism and symbiosis, which may provide an evolutionary trajectory to renovate deteriorated ancient symbiosis via pathogen domestication."