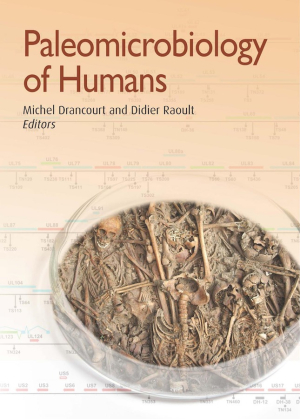 This coming Monday Jamie will have a post that reviews a book on the analysis of ancient DNA and the role that it has played in reconstructing the history of human migrations and genetic mixing. As our readers are likely aware, we are holobionts whose functional genetic makeup goes beyond just the human cells. Not surprisingly, investigation of ancient microbial DNA (paleomicrobiology) can also help scientists understand human history and evolution. The development and scope of this relatively young field is the topic of a recent collection of reviews published by ASM Press: Paleomicrobiology of Humans. Two of the key researchers involved in the development of the field, Michel Drancourt and Didier Raoult, serve as expert editors of the book. 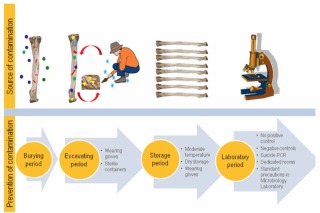 Paleomicrobiology and How to Do It

In their introduction, Drancourt and Raoult define paleomicrobiology as "a new field that aims to identify past epidemics at the crossroads of different specialties such as anthropology, medicine, molecular biology, and microbiology." In reality, the field is not precisely new as much as reborn through new methods. A 1969 paper by F.M. Swain published in Annual Review of Microbiology is the earliest usage of the term 'paleomicrobiology' that I can identify, there used synonymously with micropaleontology in reference to the discovery and study of microfossils. Like for other fields, what is 'new' here is the development of next-generation sequencing technology and metagenomic analysis that has allowed paleomicrobiology to go beyond consideration of organismal (cellular) remains to detailed analysis of molecular remnants.

Three chapters introduce readers to the recent overall developments of paleomicrobiology and its basic methods, with emphasis on source material for ancient DNA and how to ensure accurate work that eliminates modern DNA contamination (Figure 1). The logic behind the placement and ordering of these chapters is perplexing. Though these are reviews that most broadly introduce the topic of the book, they only begin at chapter 5, after reviews of using paleomicrobiology to look at epidemiological history in cemeteries and the relations between infectious history and human immune development. Aboudharam's "Sources of Materials for Paleomicrobiology" and "Human Coprolites as a Source for Paleomicrobiology" by Appelt et al. offers a pair of methodological introductions that pair nicely together. Yet, they are separated by the important "Paleomicrobiology Data: Authent[if]ication [sic] and Interpretation" by Drancourt, a survey that in turn pair nicely with Raoult's "A Personal View of How Paleomicrobiology Aids Our Understanding of the Role of Lice in Plague Pandemics."

The seemingly random ordering of these chapters within the book simply means that the book shouldn't be read in linear fashion per se. This doesn't detract much from the utility of the volume. As an academic title it is more meant for piecemeal consumption. And for the general reader this series of chapters will be of the most interest. Raoult's "Personal View…" is noteworthy for an academic review in that it is more of a personal essay on his paleomicrobiology research surrounding the historical transmission vectors of Yersinia pestis. The conclusions that his group drew from their work proved controversial, largely because of questions over reliability of ancient DNA samples and potential errors from contamination. His perspective – and passionate defense – of their work proves interesting regardless of one's degree of remaining skepticism around the issues. 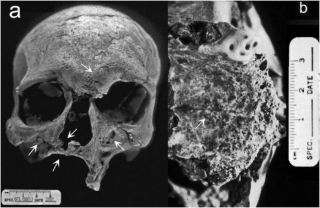 The latter half of Paleomicrobiology of Humans settles into disease-specific studies that the field has undertaken to help elucidate specific historical epidemics. The influences of smallpox, V. cholerae, Plasmodium, M. leprae (Figure 2), M. tuberculosis, Rickettsia, and Bartonella on periods of human civilization each get their due with individual reviews. Stories of Bartonelloses stood out for me, as these diseases of humans and other animals are not as routinely covered as others. (A cursory look indicates we haven't featured them on this blog.) Though only given a short chapter, I appreciated learning about the evidence for the historical roles Bartonella has played, such as in Napoleon's retreat from Russia in 1812.

Rather than focusing on a single disease, Le Bailly and Araújo broadly cover intestinal parasites in a review that includes discussion of applications to archaeology and parasitology alike. As one example, they cite increases in parasite diversity around 3400 BCE, corresponding to cultural and dietary adaptations that occurred due to the colder climatic conditions of the Piora Oscillation period. The role of insects in bacterial and protist disease transmission alike means that analysis of ancient markers of these animal species also garners discussion throughout the book. The volume closes with a chapter on paleoentomology, covering molecular analysis of modern and historic samples of human lice. Much of this review reiterates details found in previous chapters, but it nonetheless presents a useful recollection of the many microbial diseases that have affected human civilization in profound ways through a louse vehicle.

Scattered (again, seemingly randomly) amid the chapters that focus on disease are three chapters devoted to paleopathology and molecular evidence of the human response to historic pathogenic epidemics. The first, by Abi-Rached & Raoult (and alluded to above), looks specifically at human immune evolution. Situated later Olaitain & Rolain have a chapter entitled "Ancient Resistome", a short – but significant – review of evidence for pervasive antibiotic resistance even among ancient samples. The last of these chapters with a human focus is by Dutour; it should perhaps be read earlier as it offers a broad introduction to the historical pathogen-host relationship: "Paleopathology of Human Infections: Old Bones, Antique Books, Ancient and Modern Molecules".

How the Past Informs the Future

While the organization of Drancourt & Raoult's book could follow a more logical flow, it nonetheless serves as a comprehensive overview of the growing paleomicrobiology field. From the outside it seems as though the field has succeeded in establishing consistent methodology that has overcome some controversies to successfully document the presence of specific microbes and diseases in ancient human remains. While these findings have not necessarily led to any large rewriting of history, they have complemented and verified the findings of other fields.

One promise often spoken of in the book is that a greater understanding of the details of epidemiology of past diseases can help to inform current disease evolution and transmission. I wish the book had a chapter specifically devoted to future prospects of the field. Instead, most chapters end with brief and vague thoughts on where studies could go beyond simply recording the presence of a given species in human remains. With the relatively new developments in the field and slowly increasing number of researchers it is understandable that not much has yet been done to tackle more complex questions. But more speculations and call for prioritization of specific kinds of studies would have been an effective addition and conclusion to the volume.