Your busy STC team carries out frequent conversations in cyberspace. We though you may want to peek at what they are like, so here is a sample.

I am toying with an idea for a TQ but don't want to make an ass of myself (not again, see TQ #155!). It has to do with the mechanism of genome reduction in endosymbionts. I find that little has been said on how it comes about, but most of the inference is that it's due to the loss of single genes or perhaps operons. My question would be: could there be a mechanism that effected genomic reduction by the sudden loss of large portions of the genome? Opin­ions? 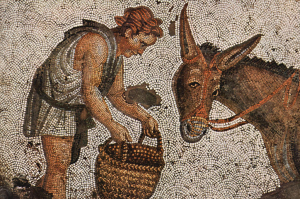 Figure 1. Apuleius's fable of the donkey in a By­zan­tine mosaic. Source

Elio, first, on the issue of making an ass of oneself... that always reminds me of Apuleius's Metamorpho­ses later known as "The Golden Ass." Highly recom­men­ded reading.... So, if curiositas occasionally turns one into an ass, at least it is a golden ass (Fi­gure 1) ! Worry not, a good life (in Epicurus sense) inevitably will turn us into asses, it comes with the territory and it is noth­ing to be ashamed of...

Second, on the possibility of a TQ revolving around the topic of genome re­duction... I don't know about "little is know about how it comes about." I am not an avid rea­der of the related literature. But I can point you in the right direction (I think). Plen­ty of descriptions I have heard from people of large scale de­letions... 1) Michael Desai (Har­vard) has deep-sequenc­ed the Lenski 60,000 generation E. coli ex­periment... plenty of whole­sale deletions observed. 2) Howard Ochman (Austin) lives and breathes genome re­duction mechanisms. 3) Our good friend Steve Finkel is also an aficionado of large scale los­ses. Cheers!

Hoping to not make ass of myself with my contribution: I have some circumstantial evidence for 'large deletions'. During my hunt for *all* oriCs in the Gammaproteobacteria, I took a more detailed look at the evolutionary history of the rnpA·rpmH·dnaA·oriC·dnaN·recF·gyrB region and that of the left-flanking cluster rsmG·mnmG·mnmE·yidC·yidD, which are conti­gu­ous in Pseudomonas but at a distance of ~80 kb (that's large, right?) in E. coli (where oriC is next to mnmG, formerly gidA). The entire set is also present and contiguous in Streptomyces, and Bacillus. In the genomes, I've seen indels with lengths of everything between ~.5 kb and to >200 kb. In all cases that I looked at, ones that were >30 kb were clearly simple inversions, smaller ones mostly looked like cut&paste from another chromosomal location (yidD is such a case: if it's not in between yidC and rnpA, you will likely find it somewhere else on the chro­mo­so­me). So, such rearrangements of chromosome-order occur pretty often (evolutionary time scale!), and genome sequences give witness of the successful events only, so it's hard to say whether they really occur more often than their "acci­dents" that result in large deletions. I think it's very likely that a lot of these larger inversions go awry, that is, are lost because the cells don't survive that. Except for the endosymbionts. 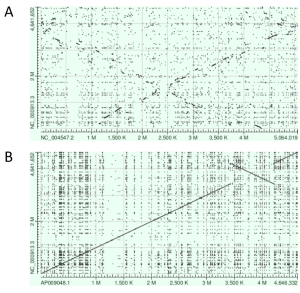 If successful inversions survive they result in these funny "dotted X" shapes that you get when you pro­ject, for ex­ample the Erwinia  genome onto the E. coli  ge­nome. When you do this for E. coli  MG1655 and W3110 you get a straight diagonal except that it is skipped by 180° for the inversion between two op­positely oriented rrn ribosomal RNA operons (Figure 2). how far apart are Erwinia and E. coli  ? ~200 mio years ? If you look closer at such "dotted X" diagrams you detect that they're ac­tually "nested inversions" in many cases. I think this dynamic behavior has to do with a stubborn selection for a nice GC skew. Ta­ken together: yes large deletions happen, and large in­ver­sions are a good indicator for that. Probably I made an ass of myself by writing (al­most) a thurs­day piece on the topic. Once you get me going... disculpe...

I think this SHOULD be a Thursday piece!!!

Would be a nice detour from our usual procedure: "conversion of a possible TQ into a thurs­day piece" by simply copy&paste our chat into the webpage : )
Including, of course, Apuleius!