Especially When You Can Initiate Treatment of An Infected Patient in 30 minutes!

Every now and then you read a paper and think to yourself, this might transform patient care. Such was the case when I read a paper suggested to me by one of our faithful TWiM (This Week in Microbiology) listeners, Dr. Volkan Ozenci of the Karolinska University Hospital in Sweden. The pa­per, Antibiotic susceptibility testing in less than 30 minutes using direct single-cell imaging, ap­pear­ed in a recent issue of PNAS. The authors take us on a remarkable journey, whereby in the not too distant future it may be possible to assess within 30 minutes the antibiotic susceptibility of microbes responsible for the over 100 million urinary tract infections (UTI) across our globe each year. Their healthcare provider will be able to prescribe a suitable drug almost as fast as the pa­tient can get dressed.

Resistance of microbes to broad-spectrum antibiotics represents a clear and present danger to human health. In order to mitigate this danger a strategy of "the right drug for the right bug for the right time" represents one of the best approaches to limit the emergence of antibiotic resis­tance. Yet, increased antibiotic resistance is a fact of modern medicine. It has grown at an alar­ming rate since the wide spread introduction of these miracle drugs in the 1950s through indis­criminate prescribing, incorrect use and, an absence of new antibiotics in the pipeline. 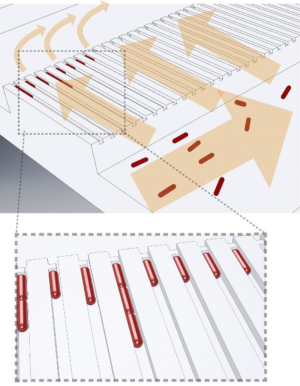 Figure 1. A liquid culture of the bacterial isolate or neat urine sample under evaluation for anti­biotic susceptibility is allowed to flow into the row of the modified micro­fluidic chip (large ar­row). A sufficient number of cell traps must be filled in order to enable the collection of a sta­tistically valid number of growth de­ter­mi­na­tions in order to meet the confidence intervals required for sensitivity determinations.Loading time for the 2,000 cell traps associated with each row was found to concentration depen­dent with 80% of the traps being filled within 30 seconds at cell density levels of 2 x 106 cfu/ml and 8% of the traps (160/2,000) being occupied within 10 minutes when evaluating samples containing dilute concentrations of microbes (1,100 cfu/ml). Abstracted Figure 1A of Source. Frontpage: A small part of a phase contrast image taken at 100× showing the back end of the cell trap, where the flow restriction region captures the cells during loading. from Source

Today, the time required to assess antimicrobial sus­cep­tibility often requires greater than 48 hours from the time of initial specimen collection. There are two prin­ci­pal methods to measure susceptibility, Kirby-Bauer (disk diffusion) or broth dilution. Both methods require a pure culture to determine susceptibility to the antibiotic. Each method is dependent on the principle that when sus­cep­tible microbes are exposed to antibiotics, their growth will slow or stop. If the microbe is resistant to the com­pound they will grow, generally at the same rate or a bit slower, should re­sis­tance to the antibiotic impose a fit­ness penalty on growth of the microbe. The method de­scribed in the paper here is no different and relies on the same principle of assessing susceptibility but greatly compresses the time required to reach a decision. How the authors accomplished time compression is given away in their title. Rather than measuring growth sus­ceptibility of a popu­la­tion, they measure the growth of single cells exposed to the antibiotic. Critical to their strategy is monitoring the growth of up to 4,000 single cells. Then, susceptibility profiles could be assessed by statistically comparing the differences between growth rates of individual microbes when they were exposed or not exposed to the antibiotic.

As you can imagine monitoring the growth rate of 4,000 individual bacteria by routine techniques is not trivial and would likely not result in time compression, at least not in my lab. However, the innovation they applied was ac­complished by the use of a microfluidic chip of a unique design, where the chip has two rows to trap bacteria, each row having 2,000 cell traps. Each trap mea­sures 1.25 x 1.25 x 50 µm, which is of sufficient size to capture one bacterial cell. Each cell trap was engineered with a constriction or bottleneck to prevent the bacteria from passing to the back channel, while allowing medium to flow around the cells (Figure 1). Their device is similar in design to the Mother Machine pioneered by Jun's lab at the University of California, San Diego. In order to assess susceptibility, they only needed to monitor how quickly individual bacteria in the traps divided, thus progressed down the constricted channel. They monitored all of this through phase-contrast microscopy, where measuring elongation or division of individual cells in their respective traps, was captured through automated computer control enabling an algorithm to calculate the speed with which each cell was dividing. In one row they provided nutrient medium without the antibiotic and the other they provided the same medium with the drug (Figure 2). Then, based on how fast the indi­vidual cells divided, it was possible to quickly assess sensitivity or resistance with a sufficient de­gree of confidence. The entire assessment lasts only 30 minutes, with an image being captured automatically each 30 or 60 seconds. They named their system 'Fast detection of Response to An­tibiotic Treatment', or fASTest. 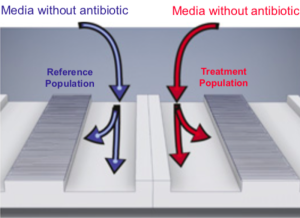 Figure 2. A liquid culture of the bacterial isolate being investigated or neat urine sample under evaluation for antibiotic susceptibility is allowed to flow into the two rows of the modified micro­fluidic chip. Upon filling of the individual cell traps Mueller-Hinton Broth with/without anti­bi­otic is allowed to flow into one of the two rows of the 2GMM. The 2GMM chip is continuously supplied with growth medium and incubated in a microscope cage incubator at 37°C. A Nikon TiE inverted microscope with a 20x phase con­trast objective, with a motorized x-y stage and CMOS camera is used to acquire an image eve­ry 30 seconds for a period of 30 minutes. Ima­ges were processed for detection of each row in the raw image with cell traps and empty traps being processed for cell pole detection using an algorithm developed in MATHLAB as described in the suppl. information associated with PNAS DOI:10.1073/pnas.1708558114. Figure adapted after Figure 2A of Source

You can witness for yourself the elegant simplicity of their system in action by viewing a series of time-lapse movies where you will marvel how they evaluated the susceptibility of E. coli (MG1655) to ciprofloxacin in the Growth Condition Mother Machine (2GMM) chip. In this remarkable 11-se­cond movie, 120 phase contrast images were captured using their automated system at 30-se­cond intervals. Even a cursory comparison of the top frame of cells against the bottom will con­vince you that ciprofloxacin (1µg/ml) does indeed significantly slow the growth rate of the E. coli. If you were wondering will this work beyond E. coli, they provide two other movies using an 100x objective, offering you a magnified view of how easily it is able to visualize growth of individual cells using another Gram negative rod, Klebsiella pneumoniae (Mo­vie S2) or a Gram positive coc­cus, Staphylococcus sap­ro­phyticus (Movie S3).

The key to time compression for the fASTest assay is in how quickly individual cell traps of the mo­dified mother cell chip can be loaded. Even when the concentration of bacteria in patient samples was low, ~104 cfu/ml, it was possible to collect 100 bacteria within 5 minutes. While this concen­tration of bacteria is considered to be in the lower range considered significant for clinically rele­vant UTIs, it was still possible to assess sensitivity of the mi­crobe to an antibiotic. Even at con­cen­tra­tions as low as 10 cfu/µl, pre-cultivation of the patient urine samples was not required, enabling assessment of susceptibility in as few as 100 cells.

Upon taking the system to clinic, they learned that when blindly screening 50 clinical isolates of uropathogenic E. coli (UPEC), fASTest was as effective as the gold standard disk diffusion test for ciprofloxacin recommended by European Committee on Antimicrobial Sus­cep­tibility Testing and practiced by their clinical microbiology laboratory. All of the 24 resistant strains and 25 of the sus­ceptible were correctly assessed by fASTest in less than 30 minutes.

While fASTest worked for urine containing as few as 100 cells, further testing is required to de­mon­strate its ability to be used for sepsis, mastitis, or meningitis. Yet, this system offers hope in our battle against antimicrobial resistance. Hopefully, in the not too distance future, healthcare providers will be able to offer patients the right drug, for the right bug, before they leave the exam room for the pharmacy. 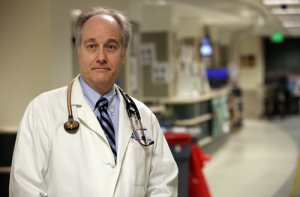 Michael Schmidt is a Professor of Microbiology and Immu­no­lo­gy at the Medical University of South Carolina and a regular contributor to the podcast This Week in Microbiology (TWiM).