The Human Story, as Told by Our Genomes

As one of our wiser bloggers put it, "I doubt that STC readers are focused only on microbiology. They must have other interests too." With that insight in mind, we're offering up our impressions of a couple of books only tangentially related to microbes. In this case, a book describing the in­creasingly detailed picture of human history that is coming into focus as more genomes of mo­dern and ancient humans are being sequenced. In other words, the history of a microbe host that is near and dear to our hearts. 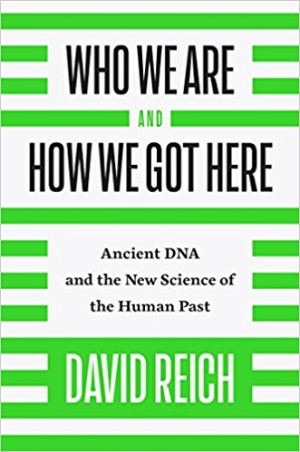 I'll take my genome whole, please
The book is Who We Are and How We Got Here, by David Reich – an ancient DNA researcher of the highest caliber. Let me clarify – Reich is by no means ancient himself. In fact, he was the mentee of a mentee of the famous ge­ne­ti­cist, Luca Cavalli-Sforza, who was known for, among other ideas, a bet he made in 1960 that the history of hu­mans and their migrations would be revealed by genomic sequences from present-day humans. Cavalli-Sforza tried to sketch human history by analyzing the geographical distribution of human blood groups. Although this work was a visionary tour-de-force, Cavalli-Sforza had the mis­fortune of being born a few decades too early. His pic­ture of human history was necessarily of low resolution, consisting of limited pixels – that is, genomic data.

Fast forward to the present, and we have the amassing of sequencing data far out-pacing our ability to analyze it. More data equals more pixels equals higher resolution. And thanks to the remarkable efforts of a small cadre of dedicated believers, the field of ancient DNA (the ex­trac­tion and analysis of DNA from fossils) has exploded, ad­ding depth to the emerging high-res picture. According to Reich, in 2010 only a few ancient genomes of hominins had been recovered and analyzed, inclu­ding those of our extinct cousins, Neanderthals and Denisovans; but by 2017, Reich's lab alone had sequenced DNA from more than 3000 fossils. And what is this high-res picture revealing? We'll get to that. 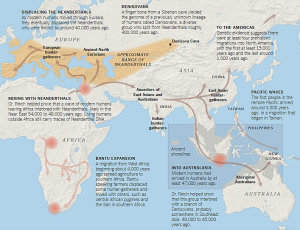 Figure 2. Map depicting the expansion of mo­dern humans out of Africa and their encounters with our now-extinct cousins, the Neanderthals and Denisovans. Source

But first, Reich explains how the information carried in our genomes informs the deep history of humans, from "mitochondrial Eve," to the human-specific mutations in a language gene (FOXP2), to the final nails in the coffin of the multiregional model of human evolution. He becomes most excited, however, when he describes how analyses of whole genomes, and not just single genes or mitochon­drial DNA, can reveal in quite intricate detail the patterns of migration and genetic admixture that explain the cur­rent distribution of human genetic diversity, that is, "who we are and how we got here." We sense that it is the very profundity of these questions that drives his research, and propels the field forward at such a rapid pace.

Migrating and mixing
So that the reader may fully appreciate the field of ancient DNA research, Reich guides us expertly through its challenges, both in terms of extracting high-quality sequences from bones that have lain packed in cave dirt for tens of thousands of years, and interpreting the data. The details lim­ned from these efforts are remarkable, and often challenge well-established hypotheses in the study of human origins. For example, while Cavalli-Sforza and many other population geneticists assumed that migration patterns were simpler in the past, growing in complexity as we near the present, ancient DNA is depicting a past that was just as dynamic as the present. Case in point: As recently as five thousand years ago, aided by a brand new mass-transit invention – the wheel – a large wave of migrants from the eastern European steppe rolled into what is today northern Eu­rope. The tale told in the genomes of Europeans? The steppe migrants replaced almost entirely the population of farmers and scattered hunter-gatherers that had been living there for some four thousand years prior. 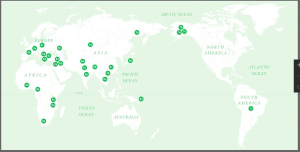 Figure 3. Map from inside cover showing the lo­cations of thirty mixture events described in the book. The theme that emerges is, "The people who live in a particular place almost never ex­clu­sively descend from the people who lived there far in the past." Source

Layered upon the migrations are mixtures among po­pu­la­tions resulting from interbreeding. Modern Europeans appear to be the products of the intermingling of three very different populations over just the past nine thou­sand years (not to mention dalliances with Neanderthals some 50,000 years ago that left their own genomic le­ga­cy). Reich emphasizes that, "The people who live in a particular place almost never exclusively descend from the people who lived there far in the past."

Such findings of ancestral complexity can sometimes clash with cherished or political notions of a culture's origins. Collaborating with Indian geneticists, Reich and his team found that the genomic data show that nearly all Indians except the small, indigenous population of Little Andaman Island ori­ginate from an ancestral mix of West Eurasians (including populations of Europe, the Near East, and central Asia) and East Asians. Politically, many Indians preferred previous findings based on mitochondrial DNA that suggested that modern-day Indians came from a more "pure" lineage that had been mostly isolated for perhaps tens of thousands of years. The idea that the Indian sub­con­tinent had been influenced by a wave of Eurasian migration could be somewhat offensive to cul­tural or national pride. Reich and his collaborator, Nick Patterson (statistician extraordinaire with a colorful path to genomics), sensitive to these issues, pitched for lineage designations that might be less offensive: "Ancestral North Indians" and "Ancestral South Indians." In any case, two divergent ancestral populations mixed in various proportions to give rise to modern-day Indians, akin to the collision of tectonic plates that formed the Himalayan mountains some ten million years ago, Reich notes.

The genetics of "race"
In the last section of the book, Reich bravely plunges into the issues of race, inequality, and the dangers of politicizing genetics. This section formed the basis of his highly discussed op-ed piece in the New York Times that hopefully every geneticist will read. A cringe-worthy anecdote involves an encounter with James Watson at a conference at Cold Spring Harbor Laboratory (I'm not going to give away the punchline; p. 263, if you’re interested). 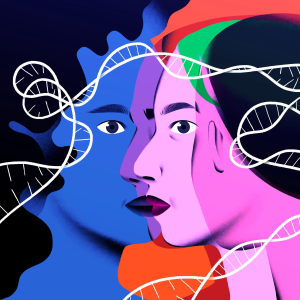 Figure 4. Illustration accompanying Reich's re­cent opinion piece in the New York Times, How to Talk About 'Race' and Genetics. Source

Reich refers to the studies of human population structure that are frequently cited to support the position that race is a social, not a genetic, construct – that is, that average genetic variation between populations is only slightly higher than variation within a population, and therefore does not support the idea of different "races". But he then warns that the politically progressive appeal of this position, combined with the legitimate fear of the use of genetic differences among populations to justify racism, have led to a dogmatism that effectively prohibits any study of genetic differences between populations. Reich points out that there are indeed subtle average dif­fer­en­ces that can be found between populations, for example, in the ability to digest lactose, or to breathe efficiently at high altitude. If geneticists avoid any discussion of such differences among populations, they abandon the field to anyone with a racist agenda, or merely a poorly exam­ined stereotype. Plus, more people may come to distrust scientists and particular findings as poli­tically motivated – a stubborn trend that needs to be reversed.

When thinking about race and identity, Reich places faith in the genome revolution to provide us with, "an even more important way to come to grips with who we are – a way to hold in our minds the extraordinary human diversity that exists today and has existed in our past." He draws an ana­logy between the Passover story and the story told by "the multitude of interconnected popula­tions that have contributed to each of our genomes": both stories serve to help us understand our relatedness to our ancestors and present-day cohabitants of the planet, giving insight into our unique place in the world.

"Our particular ancestors are not the point. The genome revolution provides us with a shared history that, if we pay proper attention, should give us an alternative to the evils of racism and nationalism, and make us realize that we are all entitled equally to our human heritage."

We have been kindly asked via Twitter – yes, STC is now on Twitter: @STCmicrobeblog – to swap the jacket of D. Reich's book (US edition) to that of the European edition. We at STC consider con­tent more important than outfit. Hence Jamie's review. Anyways, here we go...

Hi! Thank you for your review of David Reich's latest book published by @OUPAcademic - I see you have the US jacket rather than the European one which is attached here - might you be able to swap them? Thank you so very much :-) pic.twitter.com/sdKrEt96qd