The Truth Is In The Outcome Gifts From the Past

Coprolites - fossil feces - are nothing short of a marvel. A message from the past, they divulge important information about what their makers lived on as well as on how they lived. They were deposited in ecologically relevant sites and they display remnants of undigested food such as seeds, bits of plant tissue, pollen, starch grains, and, of course, DNA. Coprolites figure prominently in paleontological studies of all sorts, including of humans. They offer evidence of food predilection, predation, cannibalism, infestation by animal parasites (e.g., tapeworm eggs in 270-million-year-old sharks), and more. The study of coprolites has been crucial in the investigation of such key questions as the colonizing of the Americas, the diets of Neanderthals, and the domestication of animals.

The earliest known coprolites stem from the Cambrian period, about 500 million years ago and were likely produced by carnivores. Carnivore dung is more likely to become fossilized because calcium-rich bones and teeth decompose slowly. The longest known coprolite measures about 40 cm in length, obviously from a large animal (it was priced at auction at $8,000). Coprolites have also been made into jewelry.

How to tell a coprolite from inorganic object similar in shape? Not easy. Not every turd-shaped rock is a coprolite, far from it. Chemistry helps. Since the early 19th century, paleontologists have been studying coprolites with appropriate intensity, more recently resorting to the analysis of biomarkers, such as steroids and bile acids, which are not only specific to certain animal groups but also long lasting. And, of course, DNA. 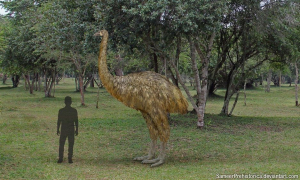 Moas and their coprolites

Here is an example in PNAS of what coprolitology (a neologism, if you permit) has unearthed. A group from New Zealand, Australia, and the US have studied the fecal fossils of extinct birds of New Zealand, the moas. Several species of moa lorded it over the landscape, some being 3.6 meters tall (the height of an African elephant) and weighing a quarter of a ton. Two hundred years after the arrival of humans, sometime before 1300, all were gone. But lucky for us, moa coprolites, about 7000 years old, are both abundant and well preserved.

The authors studied coprolites from 5 kind of moas that had lived in distinct habitats of New Zealand’s South Island. They analyzed their DNA content by high throughput screening and, reasonably, found that the ones from moas differed from those of mammals and modern birds.  A surprising fact is that the greatest diversity of what they ate were fungi, which also represent the dominant taxa in the samples. Most of these were ascomycetes mold and yeasts, probably derived from the environment and therefore not further studied. For the rest, edible basidiomycete mushrooms were abundantly represented, especially in coprolites from the moas that that lived in the mycorrhiza-rich (ergo mushroom-rich) southern beech forests.  Examples are such common mycorrhizal mushroom genera as Cortinarius, Inocybe, and Armillaria, as well as some puffballs. Mushroom DNA was also found in the kakapo,  a New Zealand flightless parrot that is known to be a mycophagist. The conclusion, warm to a mycophilist heart, is that the moas were mushroom eaters.  If the thought occurred to you that they may have vanished because they ate poisonous mushrooms, forget it: it’s human pressure for food that did it. Note that Mycophagy in birds besides kakapo and other parrots is not unheard of, but it is satisfying to learn that ancient moas had this taste. It was lost with time, as ostriches and kiwis do not share this palate. 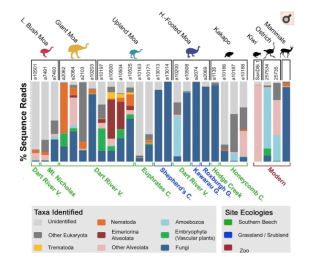 Figure 3. Proportions of reads per sample to taxonomic and ecological groups as determined using QIIME. All OTUs present in extraction blanks are filtered. Note the unequal total read counts among samples. Source

Being eaten by animals serves mushrooms to spread their spores, especially in species that do not primarily rely for it on wind dispersal. Take for instance those species in the genus Cortinarius, common in New Zealand, that are ‘sequestrated.’ That is, they don’t make fruiting bodies with open caps (mushrooms) that allow spores to be directly liberate into the air. Rather, their fruiting bodies are enclosed, and their spores contained within sac-like structures. Thus, they require the help of, say, fungivorous animals for their dispersal. This is of course true of extant truffles and a number of mushrooms species. The authors point out, with some reason, that New Zealand sequestrated mushroom species are very colorful, an appropriate way to attract birds. They speculate that moas and the nearly extinct kakapo parrot cannot be replaced in this role by the imported animal species, hence the survival of such mushrooms is threatened.  At present much of this is educated guesswork. Likely, more sequencing data down to the species level will shed more light on this topic.

What Else Did the Moas Eat? 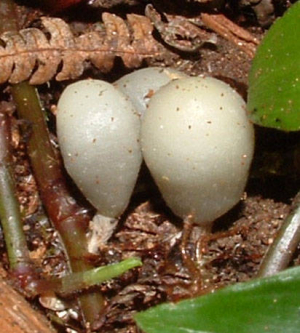 In conclusion, we know now that moas ate fungi, mosses, and ferns, and that different species had different tastes in plants, depending in part on the plant biota of their individual habitats.  Finding trematode DNA in coprolites of some moas also reveals their habitat predilections because these parasites are usually transmitted by eating aquatic vegetation or snails. All told, the smaller upland moas ate different food than the giant moas. Notice how much can be learned from the study of coprolites regarding the physiology and even how their creators interacted with their ecosystem. Isn’t it remarkable how much information can be extracted from such down-to-earth remains?

Elio discusses Coprolites and the Moa, in detail, on this episode of This Week in Microbiology