« Take a Deep Breath of... Methane | Main | Needles in a Metagenomic Haystack:Hunting for Molecular Plastic-Chewers »

Will the blight end the chestnut?
The farmers rather guess not.
It keeps smoldering at the roots
And sending up new shoots
Till another parasite
Shall come to end the blight. Fungi make toxins (called, not surprisingly, mycotoxins). This won’t surprise you because you know that certain mushrooms are poisonous and you may know of the aflatoxins, noxious chemicals made by molds that grow on stored grains. Mycotoxins include not only the afla­toxins but also ochratoxins, ergot alkaloids, and others. One species of fungus may make a number of different mycotoxins, and the same toxin may be made by several species. Many mycotoxins are heterocyclic polyketides. Such compounds have now been called ‘specialized me­tabolites,’ superseding the older term “secondary meta­bolites’ (see also here).

Aflatoxins are carcinogens produced by certain molds, notably Aspergillus flavus and A. parasiticus, which are abundant in warm and humid parts of the world. Afla­toxins are among the strongest carcinogens known. They are often found in improperly stored peanuts, sorghum, cassava, tree nuts, and a number of spi­ces. Aflatoxins are thus found in human foods as well as in feed for pets and agricultural animals. Adult humans are quite tolerant to these toxins, but children are said to be particularly sensitive, where it can lead to stunted growth and liver cancer. It appears that no animal species is entirely resistant to aflatoxins.

Ochratoxins are another group of mycotoxins produced by some Aspergillus and Penicillium species, the most prevalent being Ochratoxin A. If you want to impress your friends at a cocktail party, consider learning its chemical name, N-​{[(3R)-​5-​chloro-​8-​hydroxy-​3-​methyl-​1-​oxo-​3,​4-​dihydro-​1H-​isochromen-​7-​yl]​carbonyl}-​L-​phenyl­alanine. Like the aflatoxins, ochratoxins are made when grains are stored under conditions that favor the growth of molds. Ochratoxins are chemically stable, thus ordi­na­ry food processing will not substantially reduce their concentration in foods. A recent paper by an Italian group proposes that fungal viruses (mycoviruses) may modulate the production of ochra­toxins.

But first a word about the mycoviruses. They are widespread among the fungi, most but not all having double stranded RNA genomes. They were first reported in the cultivated button mush­room of the store (Agaricus bisporus) in the 1940s, where it causes widespread damage. As an aside, a three-part symbiosis involving a mycovirus of the endophytic fungus of the grass Di­chan­thelium lanuginosum makes the host become tolerant to high temperatures (discussed here). For a review of the mycoviruses of Aspergillus, see here. Interestingly, most mycovirus infections lead to decrease virulence of their fungal host, which makes them good candidates for biocontrol (see the poem above). Unlike prototypical bacterial viruses, mycoviruses do not lyse the host cell but reach high levels without cytotoxic effects  and are often cryptic (see here). 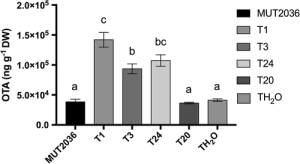 (click to enlarge) Figure 3. Ochratoxin A (OTA) quantification in MUT2036 and derived isolates. Isolates T1, T3 and T24 infected with Aspergillus ochraceus virus had an overproduction of OTA compared with that of MUT2036. Isolates TH2O (virus free) and T20 (infected with Penicillium aurantiogriseum totivirus 1) were not signi­ficantly different from the isogenic virus‐free MUT2036. Source

Now back to the ochratoxin-pro­ducing fungi. The au­thors of this paper showed that transfecting an ochra­toxin-pro­ducing  strain of Aspergillus ochraceus with viruses from a cognate strain led to the overproduction of the toxin (unlike what is seen in the usual fungus-virus interactions). However, they were unable to detect an upregulation of the mRNAs of genes known to play a role in ochratoxin biosynthesis, so the mechanism remains obscure. The author conclude: "Mycovirus‐mediated me­tabolite overproduction provides an additional para­me­ter to exploit the production of secondary metabolites from fungi. In addition, these results reveal a new factor that must be considered when predicting OTA conta­mi­nation in food and feed commodities. In fact, mycotoxin modulation should be considered on a case‐by‐case ba­sis when considering mycoviruses as biological control agents, especially where myco‐toxigenic fungi are considered targets. The beneficial effect of virus‐associated hypovirulence could be countered by an increase in mycotoxin production."