« How Bacteria on our Skin Might Prevent Skin Cancer | Main | On your marks, get set, go! »

Travel down the eastern slope of California's Sierra Nevada and you will run into a number of breathtaking sights. Ranking high among them is Mono Lake, a large shallow lake that sports a collection of strange limestone columns. Protruding some 30 feet above the water surface, these structures, known as chimneys, consist of calcium carbonate minerals, mainly as calcite (CaCO3) called tufa. The columns were formed underwater and the reason they are visible is that in 1941 the city of Los Angeles, in an effort to slake its growing need for water, started diverting the water of Mono Lake. This lowered the water level to half, doubled its salinity, and exposed the columns. The process has been stopped and the lake's water level is now allowed to fluctuate more normal­ly (See here for past and current levels). Meanwhile, no active growth of tufa columns has been re­ported since the 1980s. 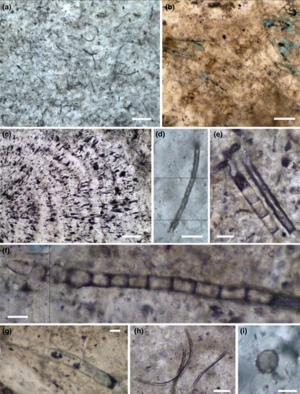 How were these structures formed? Was the process pu­re­ly geological, abiotic, or where living organisms invol­ved? Not a simple question, that. A recent paper in Geo­biology examines this question but as we are short of geo­logists at this blogsite, let us hear from the authors of the paper: "Distinguishing biologically influenced sedi­men­tary rock structures from abiotic ones in the field, or when selecting high priority targets from remote images, is a key challenge in the search for early and extra­ter­res­trial life. There are few recognisable millimetre to deci­met­re‐scale structures identifiable as definitively "micro­bial" in outcrop.  Free‐standing chimneys composed of carbonate, sulphate or silicate minerals, if requiring the influence of organisms to develop, provide a potential set of targets for terrestrial geological and astrobiological investigation (e.g., Walter & Des Marais, 1993)."

The authors discuss both geochemical and geobiological models that have been proposed and come down on the side of both, with an apparent preference for the latter. In favor of a biological origin is the finding of abundant microbes and algae at the site of active tufa growth. The study concludes that, among other things, biofilms en­cou­raged crystal growth by providing sites of calcite nu­cleation. They present detailed morphological observa­tions of the Mono Lake chimneys that reveal a large number of filamentous microbes, varied in size and shape. Using a barrage of techniques, including XRD, GC-MS, NanoSIMS, and scanning and transmission electron microscopy, they found organic biomarkers that are con­sistent with an origin as extracellular organic material (EOM). This paper is replete with details that speak di­rectly to the question of the biological origin of the Mono Lake tufa. It should be read carefully by those interested in this unusual set of events.