« Vaccines and the Fight Against Antibiotic Resistance | Main | Talmudic Question #158 »

Vibrio cholerae  is "kind of a big deal" in the bacterial world and a popular topic here on Small Things Considered. Beyond being the causative agent for the disease cholera, it's a model bacterium for studying horizontal gene transfer and interbacterial competition.

A recent study in Nature Microbiology sheds new light (literally) on how this happens. Using ad­van­ced fluorescence-based microscopy techniques combined with classic microbial genetics, the authors present exciting new insights into how V. cholerae  takes up DNA from the environment. The study confirms previously hypothesized mechanisms of DNA uptake, and also shows through stunning videos just how fast and flexible this uptake mechanism is. 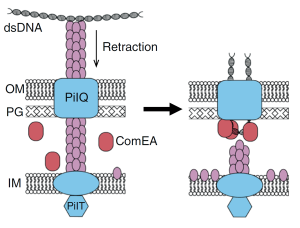 Figure 1. Proposed ComEA dependent mecha­nism by which double stranded DNA is force­fully pulled through the PilQ pore via a mo­le­cu­lar ratchet mechanism. Source

There are two common models proposing how bacteria bring DNA from the environment into the cell during na­tural transformation. A dominant theory poses that com­petence pili bind to DNA outside of the cell and then re­tract, pulling the DNA with it into the cell. These type IV competence pili are distinct from the type IV secretion system and other pili the bacteria produce. An alternative theory suggests that the pili act as "gatekeepers," essen­tially signaling the cell to allow passive diffusion of envi­ronmental DNA through the membrane.

The evidence that would distinguish between these mo­dels: does the pilus actually bind to DNA?

Previous microscopy studies suggested that DNA binding is exactly what happens. Using electron microscopy (EM), researchers had previously observed DNA co-localizing with the pilus. But there are two major problems with this type of evidence. First: it's static. EM gives you a snapshot that doesn't allow real-time observation. It just shows a potentially fortuitous moment in time. Secondly, how can you tell if the DNA is actually attached, or just-co-localized?

Using real-time fluorescence microscopy, Ellison and co-authors captured the entire "catch and reel" process. First, they altered a hyperpiliated pilT mutant strain so that it could become labelled with a fluorescent dye. They did this by replacing an amino acid residue of PilA, the major pilin sub­unit (Figure 1), with a cysteine that could be fluorescently labelled with a thiol-reactive maleimide dye. Then, they labelled both the DNA and the pili using a constitutively competent V. cholerae  strain (Figure 2). 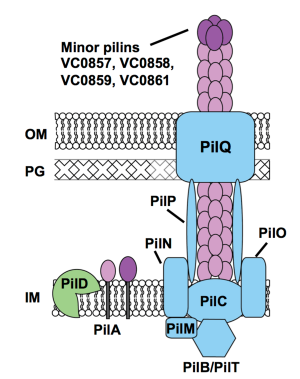 Figure 2. Diagram of the proposed Type IV pilus in V. cholerae including minor VC pilins at the pi­lus tip that, when mutated, can abolish DNA bin­ding capability. Supplementary Figure 1a of Source

Having observed this interaction, the authors next sought to disrupt it using targeted mutations. First, they identi­fied mutations that would reduce the DNA binding ac­ti­vi­ty. By altering positively charged residues in major and minor pilins, they identified specific minor pilin muta­tions (VC0858R165Q, VC0859K148Q, and VC0858R168Q, at the tip of the pilus in Figure 2) that inhibited or abolished DNA binding and in some cases altered transformation effi­ciency and pilus dynamics.

Additional experiments that examined cellular proteins involved in DNA uptake into the periplasm and pilus re­traction, showed that pilus re­traction is necessary but not sufficient for DNA uptake. A fluorescently-fused ComEA protein, a protein essential for natural transformation that binds to DNA in the periplasm, was frequently and readily observed, but only after retraction of the pilus (Figure 3). Confirming previous studies, ComEA knockout mutants could not internalize DNA even with normal type IV pilus dynamics. This impor­tant role of ComEA and other mechanistic features in V. cholerae  DNA uptake is discussed in a previous STC article.

Together these results allude to a natural transformation process, where DNA binds to the tip of an extended pilus which then triggers the ComEA-dependent mechanism to pull DNA through the outer membrane and into the cell (Figure 4). 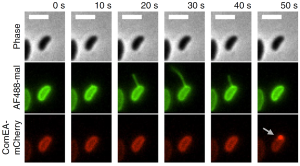 Now that the authors confirmed the importance of pilus binding and retraction for DNA transport into the cell, they generated and published several real-time videos (one example at the end of this post) showing spectacu­lar features of this well-studied system. They are pretty amazing, so give your cat videos a rest (do as I say, not as I do) and check them out!

One notable observation: the type IV pili that V. cholerae  use aren't rigid, static structures: they writhe, wiggle, and move. In fact, what first caught my eye about this story was a striking clip showing a flexible and fast moving pi­lus capturing the DNA and "reeling" it in. While many news articles described this as a "harpoon-like" system, it seems to me much more closely related to fly fishing.

This is in contrast to the murderous type VI pili of V. cholerae , which are indeed harpoon-like. Zo­ued et al. eloquently called these "nano-cross-bows." These can be used to kill other bacteria, at which point V. cholerae  can then then take up their precious DNA. However, the type VI pilus doesn't actually bind to it. That being said, the systems are related, and common cues can trigger both the killing and DNA-uptake mechanisms. 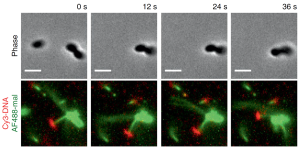 To catch this potentially valuable DNA, V. cholerae  gene­rates these pilus assemblages at a staggering rate, and then retracts them even faster. The pili are about 1 µm long, and about 47% of cells grown in competence-indu­cing conditions generated one or more within one mi­nute. Since the bacteria are typically about 1 – 2 µm in length, this is roughly equivalent to a human generating a limb the length of their entire body. Spectacular but really, really weird.

While V. cholerae  grow its pili quickly, they retract them twice as fast, in roughly 30 seconds. This allows the bac­teria to quickly and efficiently pull the captured DNA to their surface. In fact, some cells ge­ne­ra­te multiple pili at the same site, suggesting that some of the components may be reused locally.

So, what's the rush? This is a major expenditure of cell resources (just thinking about my example of growing a new limb every minute makes me exhausted). It may allow bacteria to take ad­van­ta­ge of potentially useful "pulses" of free DNA in the environment. Or perhaps disassembly is easier than assembly, and the resources are needed desperately for additional pili.

What's new about this news?

Natural transformation is a way in which bacteria, including V. cholerae , take up useful DNA from the environment, including antibiotic resistance genes and virulence factors. A convincing mecha­nism for DNA uptake in V. cholerae  was previously hypothesized and partially demonstrated. But the exact role of the type IV pilus in this process, which we knew was required for natural trans­for­mation, wasn't substantiated until now.

With stunning visuals and extensive experiments, this study goes a long way towards a compre­hensive understanding of this DNA uptake in bacteria. In sum, it's fantastic to see (and believe) new discoveries about this amazing natural transformation system. 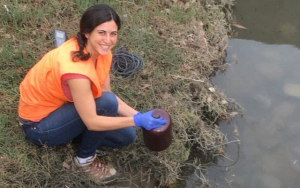 Rachel Diner is a Ph.D. candidate in Andrew Allen's lab at UCSD and the J. Craig Venter Institute in La Jolla, CA. She studies mari­ne microbes and how they interact with each other, humans, and the environment. She is also a new mom, which gives her ample time for running her own blog (really?).