The Secrets of Ancient Beer 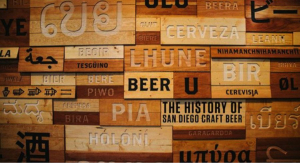 With the Octoktoberfest themed beers flowing all season, it seemed only appropriate to have a post about the mar­vels of this delightful frothy beverage. A few months ago, I was walking through the 'Beerology' exhibit at San Die­go's Museum of Man, where I saw something so shocking it ma­­de me stop dead in my tracks. In a glass case was a two-thousand-year-old bone of an ancient Sudanese that, under UV light, glowed green from tetracycline. Tet­racycline, an antibiotic that was discovered in 1948, was staring right back at me from the bones of an ancient Nubian.

How did Egyptians 2,000 years ago get their hands on modern antibiotics? Investigators propose two possibilities. The tetracycline either came from the ancient Nubian diet, much like how anti­biotics are found in our bodies today, or it was the result of microbial contamination. In 1980, a team of Emory University bioarcheologists, George Armelagos among them, published a paper answering this question. Bioarcheologists often use ancient bones to determine the sex, age, diet, and other clues of ancient deceased individuals. The investigators looked at thin slices of the bo­nes using a flourescence microscopy and, unexpectedly, discovered something very peculiar. The 2,000-year-old bones contained small yellow and green bands indicative of the presence of mi­ne­ralized tetracycline. As the bone mineralizes in the living person, the tetracycline stays bound to the bone. This process is called "tetracycline labeling" and is so effective that in medicine it is used to measure bone growth over time. At the time the authors believed the comparison of the fluo­rescing 2,000-year-old osteoids to the modern fluorescing osteoids would be enough to convince their colleagues that the tetracycline observed came from the diet of ancient Nubians and not from other sources. However, at the time, this was dismissed by the archeological community as simply contamination from tetracycline-producing microbes 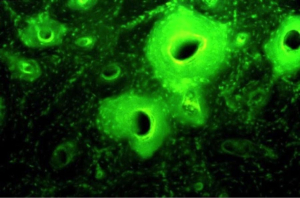 Nearly thirty years later Dr. Armelagos went back to the ancient bones to once again test whether the glowing an­cient bones are indicative of tetracycline being part of the diet of ancient Nubians and not from post-mortem con­ta­mi­nation. He partnered with Mark Nelson, a medical chemist from Paratek Pharmaceuticals, to isolate tetra­cycline from these ancient bones. They tried to prove that tetra­cy­cline was found bound to the osteoids of mo­dern bones, just like inside the bones before the ancient Nubian passed away.

If tetracycline is found in ancient bones, how did it get there? How did the Nubians get their hands on modern-day antibiotics? They did not just walk to their local pharmacy to pick some up. The re­searchers theorize the people ingested it by drinking a specialty brewed beer. Ancient peoples were masters at producing different types of beer, and it is well documented that certain bevera­ges were given for medicinal purposes. It has been hypothesized that some strain of Streptomy­ces, able to produce tetracycline, was serendipitously mixed into the fermentation process of an­cient beer. As the barley plants were pulled up from the ground and thrown into the fermentation vessel, their soil-dwelling microbes piggybacked with them. Streptomyces colonies would be vi­sible to ancient brew masters as golden lumps floating in the fermenting beer. Something about these golden lumps must have intrigued them. Something about this beer with its floating, golden lumps might have healed people with common bacterial infections such as small infected wounds or urinary tract infections. So, the brew masters might continued making their specialty beer. 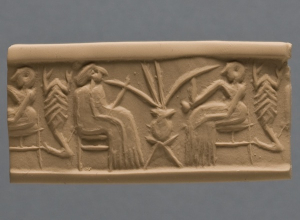 Figure 3. Modern rolling of cylinder seal (Early Dy­nastic period, c. 2600 – 2350 BCE, Khafajeh, Iraq) showing the consumption of beer through long reed straws. Note that beer consumption was not only common in ancient Egypt (see text) but also in Mesopotamia and among the Hittites in today's Turkey (Courtesy of the Ori­ental Institute of the University of Chicago). Source

Dr. Armelagos and his team of researchers hypothesize this beer was made by inoculating a new batch of beer with 10% of Streptomyces-containing beer from the pre­vious batch. This way the brew masters from thousands of years ago created a beverage with a high enough concentration of the antibiotic for it to be an effective ancient medicine. To prove the beer can be produced in the first place, grad students in Dr. Armelagos' lab crea­ted the proposed beer. They were successful, but little praise was said about the taste of the sour, liquidly por­ridge beer. I guess it was an acquired taste. It's worth noting that at the time beer was not the clear, bubbly beverage we are familiar with today. It was more like a thin gruel where the top liquid beer was consumed first and then the leftover porridge was eaten. Beer two ways!

To me, this story begs the question: what other secrets are lurking in the recipes of ancient beer? Other antibiotics? Can we learn from the past and en­cou­rage a mode of delivering life-saving antibiotics while simultaneously replenishing our micro­biome (*cough cough* use fermented beverages and foods). Some craft breweries today are ma­king efforts at recreating ancient beer, thus we may once again be able to discover something that makes us stop dead in our tracks. So, let us go for a drink!

Gillian was a masters student in the Dutton lab at the Uni­versity of California, San Diego. She enjoys marveling at the microbial world.