Vaccines and the Fight Against Antibiotic Resistance

For the vast majority of the natural history of Homo sapiens, some 200,000 years, the average life expectancy at birth has been around 30 years. What I find most amazing is that as recently as 1900 the world average human life expectancy at birth had remained unchanged. Then a dramatic change occurred, the global human life expectancy at birth more than doubled in the last one hundred years. Humans born today have an average life expectancy of more than 70 years. This remarkable change has been largely the result of enormous decreases in the rates of infant and child mortalities and a shift in what we die from. While in 1900 more than half the deaths in the USA were due to infectious diseases, today infectious diseases cause a small fraction of deaths and they pale in comparison to the big killers, cancer and heart disease (See Figure 1). 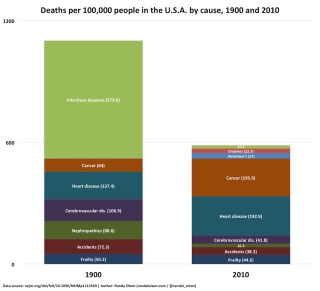 The three pillars underlying this phenomenal increase in life expectancy are hygiene, vaccination, and antibiotics. But today one of those pillars is weakening. The increase in antimicrobial resistance has reached alarming pro­por­tions and there is no clear end in sight. These days one reads a lot about the possibility of the world entering into a "post-antibiotic era," see for example this. (The topic of antimicrobial resistance and ways to fight the problem has been covered in various STC posts, for example see here and here.) One widely disseminated published pro­jection estimated that by 2050 as many as 10 million an­nual deaths worldwide could be caused by resistant mi­crobes unless dramatic changes occur. That a lot more annual death than those from cancer today. What chan­ges might be made to reverse the antimicrobial resis­tance crisis?

Clearly, there are many answers to that question. But, in general, most of them come in two fla­vors. One is to increase the awareness of the problem, so that antimicrobials are used more re­spon­sibly worldwide. The second is, of course, the need to develop new antimicrobials to which resistance has not yet evolved. The problem with the first is that there has not been a worldwide unified political will to widely regulate the production, sale, and use of antimicrobials. The problem with the second is that despite large efforts by many pharmaceutical companies and academic laboratories, the pipeline for new antimicrobials is relatively dry. Long gone is the "golden era" of antibiotic discovery of the mid-twentieth century when most of the effective antibiotics were dis­covered and introduced.

(Click to enlarge ) Figure 2. Time to detection of resistance of human pathogens to antimicrobials (in red) and to vaccines (in green). Black X symbols indicate insurgence of resistance, with lines starting at product introduction (yellow stars; except for smallpox vaccination that began much earlier. Source

There is a third general answer to the problem of an­ti­mi­cro­bial resistance that receives relatively less attention but which, in my mind, deserves to be pushed harder that it currently is. That is the prevention of infection in the first place through vaccination. This week I have im­mersed myself in the topic and have come out feeling that this is an approach that very much deserves to be given equal attention as the other two.

Perhaps the key spokesperson for the use of vaccines in the fight against antimicrobial resistance is Rino Rappu­o­li. He was instrumental in developing what is known as "reverse vaccinology," the concept of using whole genome sequences and bioinformatics to pre­dict effective antigens from pathogens to use in vaccine development. This approach was first used to develop a vaccine against Neisseria meningitidis Serogroup B and has since been used to make other vaccines. It is thus conceivable to think that it should be possible to develop effective vaccines against the most problematic pathogens that are quickly becoming a serious problem due to the high frequency of antimicrobial resistance. What I was most impressed by was a figure that compared when an antimicrobial was first used and when resistance appeared to when a vaccine was first used and when resistance appeared (see Figure 2). Of course, this all makes sense given the mechanisms underlying the two approaches to controlling infectious diseases. Clearly, antimicrobials will remain the method of choice for treating infections, but new vaccines aimed at preventing the infections in the first place certainly should be a great complementary approach.

Enough said. Now I invite to read three articles that I found compelling, all of which have Rino as an author: a general commentary on the subject, a recent review and an older opinion piece pro­moting the idea of vaccines against antibiotic resistant pathogens. I also invite you view Rino's En­vironmental Microbiology lecture from November 2017 for the Society for Applied Microbiology. (I thank Merry for alerting me to the availability of this lecture.) I hope you will gain a sense of what potential vaccines have in helping fight the problem of antimicrobial resistance. I, for one, found these readings and view­­ing enrapturing – to borrow a word from Elio. Good reading, good view­ing. I hope you enjoy and join in on the discussions of how to confront the problem of antimi­cro­bial resistance.

Frontispiece: Vaccines can have an effect on antimicrobial resistance by reducing the number of ill people and avoiding unnecessary antibiotic prescriptions. Credit: Eduardo Sote­ras/AFP/Getty. Source