« Replay : A Close Encounter of the Enological Kind | Main | Symbiosis »

"May I ask you a question?"

My first lecture (in 1958, long ago) was to medical students and the subject was DNA. I felt privileged to be given the task to talk about this subject, which was born in its modern incarnation not many years earlier. The existence of DNA had been known since 1869, thanks to a young Swiss physician, Friedrich Miescher. However, for years its role was relegated to some obscure and not very interesting functions of the cell. That it is the hereditary material had to wait until 1944, when Avery, McLeod, and McCarty demonstrated that it indeed carries the hereditary information. And 9 years later, in 1953, Watson and Crick told the world that the DNA molecule is a duplex wrapped as the now famous double helix. Soon, this discovery made it possible to envision how DNA is replicated, that is, how it makes a new copy every time its cell divides, and how the genetic information it carries is actually 'read' by the cell's machinery. 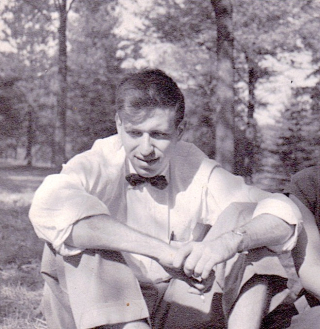 Heady days, those, and lecturing about the 'Queen of the molecules' deserved special respect if not actual veneration. So, I prepared myself accordingly and spent untold hours making sure that I would make it rise to the occasion. An aside, to explain the context of what this is about.

In the early and mid 50s, the US government had decided to support basic biological and medical research at a previously unheard-of level. Grant money became available practically for the asking, at least to reasonably qualified researchers. Medical schools took advantage of this bonanza. Even the hithertos less prominent ones rapidly transmuted themselves into research institutions. To staff them, they turned mainly to Ph.D.s, most with little experience in medical education. I suppose that in august schools with experience in educational matters, the transition may have taken place in an orderly fashion. Not so in my own experience. The medical school I first joined as young assistant professor was recently founded and although its young faculty was made up of quite distinguished scientists, we were left pretty much alone in devising a curriculum. Not surprisingly, we turned to what we knew and decided that a hefty amount of science couldn’t possibly hurt budding physicians and may even do some good. This, in moderation and with reasonable awareness of how this fits in medical education, is a worthy goal. But the aim should be for the students to be mindful of the scientific method, not just be subjected to an avalanche of scientific facts. 'Drinking from a firehose' it has been called. To illustrate the absurdity of our approach I need only mention that we gave lectures on biochemical topics that had been covered in the Biochemistry course the previous year, blissfully ignoring what the curriculum looked like.

In my limited experience, things got better in the 60s, a time of social renewal (remember, Flower Power, the Beatles, etc.) that called for accountability by all, the faculty of medical schools included. By that time, I had changed schools, although the old attitude was about the same in both. But now the students held rather loud protest meetings, asking why they were taught what they are taught. Partly because their protests made sense, and perhaps because it was in keeping with the tenor of the times, we listened, more or less reluctantly. A bunch of new curricula emerged all over the map. By and large, they not only answered the students' immediate concerns, but were based on recognizable general principles. Life in medical schools began to make more sense for students and faculty alike.

To come back to my DNA lecture, I don't remember the details, but that being the mid 50s, I probably gave it to 'em with both barrels. Surely, such an august topic deserved special attention. After the lecture I took the elevator, when a student leaped in before the door closed and, somewhat breathlessly said: "Doc, can I ask you a question?" Aha! I said inwardly, I stimulated one student at least. "Go ahead," I uttered. He said: "Doc, what’s good for dandruff?"