« Fungi, Toxins, and Fungal Viruses (A Snippet) | Main | State of the World's Fungi »

Needles in a Metagenomic Haystack:
Hunting for Molecular Plastic-Chewers

Science and speculative fiction works may warn of im­mi­nent threats like hostile extraterrestrial beings or the ar­tificial general intelligence of the technological sin­gu­la­ri­ty. But the more humdrum overabundance of plastic waste, an issue closer to home and our everyday lives, is just as deserving of fear. Plastic has been a simultaneous boon to and bane of humankind. The double-edged ma­te­rial that spurred innovation and creativity has an in­si­di­ous nature that is becoming starker, as the size of ocean garbage patches becomes less of patches and more of countries. Plastic’s invention in the 1900s drew great praise and excitement – now, we seek ways to destroy what we created.

In 2016, Christoph wrote a post about the discovery of microorganisms that possess the rare abi­li­ty to degrade polyethylene terephthalate (or simply PET) plastic: the bacterium Ideonella sakiensis and the fungus Pestalotiopsis microspora. Now, a team of researchers based at the universities of Hamburg and Leipzig added a handful of more plastic-munching microbes to the list. Danso et al. discovered previously unknown PET hydrolases, the enzymes that are directly responsible for de­grading PET, that are produced by members of the phyla Actinobacteria, Proteobacteria, and Bac­teroidetes.

The researchers took an interdisciplinary approach to identifying these new microbes, moving from in silico analyses to in vitro experiments. They first used computational tools to identify po­tential new PET hydrolases. First, they generated a hidden Markov model computer algorithm to filter through existing genome and metagenome databases to seek out signs of PET hydrolase se­quences. The researchers took the catalytic site sequences of nine known PET hydrolases, popped the sequences into their algorithm, and identified eight conserved regions. They then ran the mas­sive UniProtKB and GenBank databases through this genomic "filter" and performed BLAST sear­ch­es for PET hydrolase candidates identified from this screen. The result? 504 potential PET hydro­la­se genes. The team then sifted through this pool of candidates and, using the alignments from the BLAST search, hand-picked thirteen that had the closest alignment to known PET hydrolases. All thirteen possess eight key motifs characteristic of known PET hydrolases – a very promising start.

It is worth noting that they selected mainly non-actinobacterial proteins for the final thirteen candi­dates. Because most PET hydrolases identified to date are from Actinobacteria, they reasoned that it would be particularly interesting to identify hydrolases from species previously unknown to har­bor PET hydrolase genes.

Backed by their bioinformatic results, the researchers moved onto testing these findings at the lab bench. They cloned four of the thirteen PET hydrolase genes into plasmids to express them in bac­teria. They overproduced and purified the enzymes using the T7 system. They added tiny bits of PCL (a plastic similar to PET, but less complex and easier to degrade) and PET to agar and poured that mix into plates. They then spotted solutions of the purified PET hydrolases on the agar surfa­ce. After incubating the plates for a day they were able to see that all four enzymes had plastic-de­grading activity, that is they produced clearing zones around the enzyme spot. This was excellent news: the bioinformatics predictions had yielded tangible results in the lab. 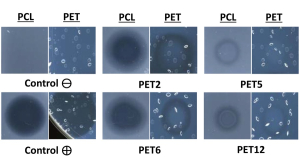 (click to enlarge) Figure 2. PET and PCL plate as­say to determine activity of PET2 (from marine metagenomic data), PET5, PET6 (from Vibrio ga­zogenes strain DSM-21264), and PET12. Activity against PET and PCL (polycaprolactone) was tes­ted with purified enzymes. PET hydrolase from Thermobifida fusca was used as a positive con­trol. Plates were incubated at room tempera­tu­re overnight or at 50°C overnight for PCL and PET, respectively. Formation of a halo confir­med activity. Source

Narrowing down the number of PET hydrolase can­di­da­tes even further and trying to find the most effective ones, the researchers then selected the enzymes that showed the best activity. These were PET2 and PET6, from a marine bacterium and from a Vibrio, respectively. These two enzymes were not only able to degrade para-nitrophenyl esters, which have shorter carbon backbo­nes, but also longer-chain substrates. The preferred re­action conditions for these two enzymes – 70°C for PET2 and 55°C for PET6 at a slightly alkaline pH – were similar to other PET hydrolases.

With their reliable prediction algorithm and successful identification of new PET hydrolases behind them, the researchers moved on to take a look at the bigger pic­ture. They zoomed out of the molecular level to inves­ti­gate the distribution of PET hydrolases at a global scale, identifying homologs from both marine and terrestrial metagenomes. Interrogating 31 marine and 11 terrestrial metagenomes resulted in 349 hits. Upon closer inspection of these hits, they found that in terrestrial environments PET hy­drolases are most commonly produced by Actino­bacteria and by Bacteroidetes in marine habitats

The final verdict? The new PET hydrolases identified in this paper hold potential for development of better tools to combat the plastic epidemic. But the real gem here appears to be the novel PET hydrolase search algorithm. This new algorithm and the workflow used to identify the enzymes – using computational tools to winnow out the proverbial grain from the chaff and then using wet-lab tools to pick out the real PET hydrolases – holds great promise for identifying more plastic-de­grading enzymes. Janie Kim is a sophomore at Princeton University who will be majoring in molecular biology. She is doing research on peptides secreted by algae-symbiont bacteria in the Donia Lab. She likes to bring her interest in microbes and sci-fi futurism into as many aspects of her life as possible, including her fiction writing and her sculpting (her Etsy truly fits with the idea of "niche marketplace").