Rounding up the Honey Bees (2)

This is the 2nd part of a longread, 1,550 words – 12 min reading – still "left over" after the first part went on­line last week. I borrowed the title from TWiM episode #178 for the irresistible pun, just adding a drop of ho­ney.

From microbiota to species, to strains, to genes

Glyphosate is a competitive inhibitor of the shikimate pathway that microbes and plants use for the synthesis of three aromatic amino acids (Trp,Phe,Tyr) and their derivatives. In E. coli, formation of 5-enolpyruvylshikimate-3-phosphate (EPSP) from shikimate-3-phosphate (S3P) and phospho­en­ol-pyruvate (PEP) is catalyzed by the AroA enzyme (EPSPS = EPSP synthase). Glyphosate competes with PEP for binding to EPSP synthase in a concentration-dependent manner, that is, it does not ir­reversibly inactivate the enzyme but creates a roadblock in the synthesis of an essential metabolic intermediate. This, then, leads to starving of the cells, retardation of their growth, and their even­tu­al demise. Consequently, E. coli can be rescued from the growth-inhibitory action of glyphosate by increasing the aroA gene copy number via a multicopy plasmid. EPSP synthases from plants and most bacteria are sensitive to glyphosate (class I EPSPS) but glyphosate-tolerant variants (class II EPSPS) have also been identified, selected for in the lab, or isolated "in the wild" from va­ri­ous bac­teria. A prototype of the latter is a class II EPSPS from Agrobacterium tumefaciens strain CP4, which survived in a glyphosate manufacturing waste stream, and which was – just for the re­cord – in­stru­mental in developing glyphosate-tolerant crop, "gene maize" for example. 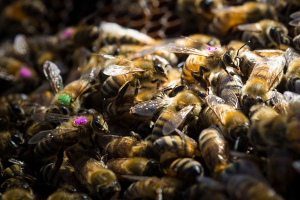 Figure 1. Bees dosed with the herbicide glypho­sate to see how it affected microbes in their di­gestive systems, using paint markings to track which bees got the chemical. Courtesy of Vivian Abagiu, The University of Texas, Austin TX

The "core species" of the honey bee microbiota are cul­ti­vable, which allowed Motta et al. to assay their suscep­ti­bi­li­ty to glyphosate individually. The growth of various Lactobacillus Firm-4 and Bartonella apis strains isolated from bees was not affected by 10 mM glyphosate (Lacto­ba­cillus Firm-5 were excluded from these assays as they lack EPSP synthetase), while growth of Bifidobacterium, Gilamella apicola, and Snodgrassella alvi strains was de­layed or fully inhibited at this concentration. However, the growth of three isolates, G. apicola App4-10, S. alvi strains wkB2 and wkB298, was only reduced by 10 – 30% by glyphosate. DNA sequencing of the aroA genes of these isolates revealed that Lactobacillus Firm-4 and B. apis strains had glyphosate-tolerant class II EPSP syn­the­tases, while Bifidobacterium, G. apicola, and S. alvi strains had glyphosate-sensitive class I EPSP synthetases (also S. alvi strains wkB2 and wkB298, but see below).

These results confirmed that not the bees but their microbiota are (aha!) the primary target of gly­phosate. Also, the results could explain, at least in part, the observed changes in the proportional species composition of the bee microbiota in the hive experiments (Figure 1). S. alvi depends on the shikimate pathway to successfully colonize and thrive in the bee hindgut where the concentra­tions of aromatic amino acids are low. Impeding this pathway by glyphosate would result in a drop of S. alvi and, for the same reason, of Bifidobacterium abundance, as was observed. The authors have no reasonable explanation for the observed increase in abundance in the hive experiment of G. apicola, which has a glyphosate-sensitive class I EPSPS. The abundances of Lactobacillus Firm-4 (class II EPSPS), and Firm-5 (no EPSPS) were reduced in the hive experiment. But this was probably not a direct effect of glyphosate because these species are deficient in later steps of aromatic ami­no acid biosynthesis and depend, therefore, on cross-feeding by other members of the gut micro­biota such as S. alvi that release aromatic amino acids.

The detective work of Motta et al. didn't stop here. In a classical complementation assay, they found that an E. coli ΔaroA mutant fails to grow on minimal media but grows normally when transformed with an arabinose-inducible plasmid carrying the E. coli ΔaroA gene in the presence of arabinose (Figure 4, left panel). Since the E. coli AroA enzyme is a class I EPSPS, growth of such in­du­ced transformants was strongly delayed, as expected, in the presence of 10 mM glyphosate (Figure 4, right panel). Tested in the same manner, the aroA genes of four S. al­vi strains, one B. apis, and one G. apicola strain, fully complemented the E. coli ΔaroA host in the absence of glyphosate, with virtually no delay in growth response to 10 mM glyphosate for B. apis wkB233A AroA, a class II EPSPS. AroA enzymes of G. apicola and the four S. alvi strains, all class I EPSPSs, were sensitive to glyphosate like E. coli AroA (Figure 4). Motta et al. could "speed up" the growth of all transformant strains by either lowering the glyphosate concentration or increasing the inducer concentration, results which corroborate the reversible mechanism of EPSPS inhibition by glypho­sate.

The complementation assays for the S. alvi AroA enzymes revealed something intriguing yet also rather troubling: they varied considerably in their response to glyphosate (Figure 4, right panel). S. alvi strains wkB2 and wkB298, which both achieved better growth than ten other isolates in 10 mM glyphosate-containing medium (see above), have particularly sensitive AroA enzymes. This was un­expected but microbiologists are used to such "surprises": these two strains had appa­rent­ly acqui­red a partial glyphosate resistance with a so far unknown mechanism. Note that it's vir­tu­ally im­pos­­sible to trace this bee line in order to detect an instance(s) where it was unintentionally exposed to glyphosate, selecting for glyphosate-tolerant S. alvi strains (glyphosate being used as herbicide in large amounts in agriculture for >40 years). More troubling, though, is the following consequence of their finding: if an effective substance elicits different responses of the cellular target in an allele-dependent manner, then changes in cell numbers of one species in a micro­bio­ta be­com­es no more than an "initial suspicion", that is, of limited significance without carefully dissecting the proportio­nal strain composition of this species and the strains' individual respon­ses to the substance. This means, to put it bluntly, "farewell" to established pharmaceutical do­se/response measurements, and "welcome" to multivariate analyses. Motta et al. cautiously claim that "glyphosate perturbs the gut microbiota of honey bees" in the title of their paper. They were thus certainly aware that even their extensive data set is insufficient to "go at full length" with a multivariate analysis at this point. But the design of their study is in line with such efforts that ra­pidly become standard in microbio­me studies. This was also noticed by Bayer AG since they im­me­diately issued a defensive state­ment (09/25) the day after the Motta et al. paper was pub­lished (09/24), in which they sought to re­ject this study by claiming that "...regulatory studies on pesti­ci­des have to follow strict international guidelines developed by the Organization of Economic Co­operation and Development (OECD) and other international organizations, and include endpoints that are relevant to the protection of ho­ney bees." A more proactive defense could have included, in my personal opinion, an offer to fund studies for "...a realistic assessment of the extent to which the observed effects might play a role in a real-life scenario by conducting studies with entire bee colonies in the field" if they consider the "relatively small number of individual bees which were tested" insufficient. You may know that Bayer AG had acquired Monsanto, for decades world lea­der in the production of glypho­sa­te-containing herbicides, for a reported $66 billion earlier this year.

Animals lack the shikimate pathway and, therefore, require Trp and Phe as "essential amino acids" for growth (Tyr can be derived from Phe) and for the synthesis of folates (vitamin B6), ubiquinones (coenzyme Q10), and hormones, for example, serotonin, dopamine, and thyroxine. Yet, lacking the shikimate pathway, animals were long thought to be largely insensitive to glyphosate (the Accep­ta­b­le Daily Intake, ADI for humans in the USA is 1.75 mg, in the EU 0.5 mg, per kilogram body weight per day), which was instrumental in establishing glyphosate as a "virtually ideal herbicide" unlikely to cause "collateral damage". It is known since the 1970s that glyphosate has an inhibitory effect on the growth of bacteria, and thus it was no big surprise when a study found that it messes with the soil microbiota (here's another study). But animals are also likely to be affected by glyphosate via their gut microbiota. A recent study found that pathogenic bacteria in poultry such as Salmo­nel­la enteritidis, S. gallinarum, S. typhimurium, Clostridium perfringens and C. botulinum were highly resistant to glyphosate, whereas beneficial bacteria such as Enterococcus faecalis, E. faeci­um, Bacil­lus badius, Bifidobacterium adolescentis and Lactobacillus sp. were moderately to highly suscept­ible. The authors of this study conclude "a reduction of beneficial bacteria in the gastroin­testinal tract microbiota by ingestion of glyphosate could disturb the normal gut bacterial commu­nity." Claus et al. emphasize this point when they say: "If it were demonstrated that glyphosate induced similar dysbiosis in mammals, then this would be of toxicological relevance because it would lead to a reduction of potentially beneficial bacteria in the GI tract of the host." Motta et al. can show in their study that the gut microbiota of honey bees is perturbed by glyphosate at "phy­sio­logical con­centrations" (as Michael Schmidt tentatively put in the TWiM #187 podcast, fully awa­re of this some­how lopsided expression). They show, in addition, that this "perturbation" causes an increase in susceptibility of the bees to a known opportunistic pathogen, Serratia marcescens kz19. This is, to my knowledge, the first direct demonstration of failure of an animal's immune system due to gly­phosate-induced alteration of its microbiota. No small feat, and worth the claim that this study "is certain to make a controversial herbicide even more of a flashpoint" (see intro to part 1).